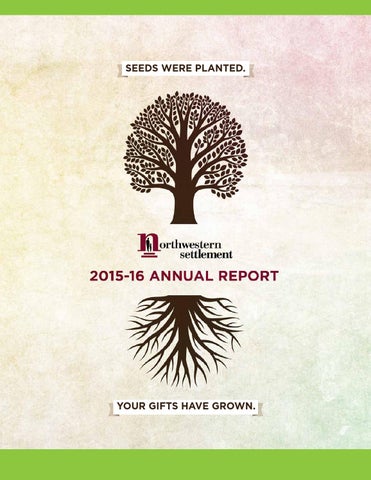 YOUR GIFTS HAVE GROWN.

A MESSAGE FROM THE PRESIDENT

Our sustained success is based on visionary leadership, thoughtful and continuously innovative program development, cost-effective service delivery, and strategic programming partnerships. Year after year, our supporters, partners and volunteers reaffirm their commitment to Northwestern Settlement. In the nearly 125 years since our founding, we have had a remarkably stable board of directors, only three executive leaders, and an incredibly dedicated and supportive network of auxiliary boards.

Opening doors to opportunity is the central

There are few organizations with such a

rich history and diverse set of activities and

The bedrock of American society is the notion

programs that bring a broad base of expertise,

But for low-income families and individuals, any number of challenges can undermine the realization of a life of stability and selfdetermination. Each of us has a history and a story. Most of us only have to go back two or three generations to find our immigrant ancestors living in poverty. Somewhere along the way we were given opportunity. Opportunity to

that everyone has equal opportunity to succeed.

having led the way in community health, camping for inner-city youth, and most recently the charter school movement to reform public education. We seize opportunity to serve.

interest and dedication to the uniquely

families comfortably and safely, passing on the

American defined purpose: to have each

benefits that accrued to us. Clubs, schools,

generation build upon the past for a more

places of worship, and settlement houses have

secured and successful future. We all have a

been, and continue to be, the community-

role to play in supporting and contributing to

based institutions that open doors to these

this purpose and vision, and together we have

the power to make enormous and positive lasting change.

To provide the Settlement’s children and families these opportunities, we remain

I hope you will join us in this work.

true to the founding settlement house spirit of flexibility and responsiveness. We’re

innovators and risk takers, having led the way in community health, camping for inner-city youth, and most recently the charter school movement to reform public education. We

YOUTH Each year, the Settlement prepares 78 children for Kindergarten through our preschool. Our site is accredited by the National Association for the Education of Young Children, and has a Gold Circle of Quality from ExceleRate Illinois. A majority of preschool students go on to attend Rowe Elementary charter school. Rowe served nearly 700 scholars in grades K-7 during the

2014-15 school year, and for two consecutive years has been named a Level 1+ school by Chicago Public Schools, the highest quality rating available. Over 200 Rowe scholars receive after-school programming provided by the Settlement, giving them a safe haven after dismissal during the school year, and all day during the summer.

THE FAMILIES OF HEAD START PRESCHOOL:

OF FAMILIES FALL BELOW THE POVERTY LINE

ROWE SCHOLARS COME OUT ON TOP:

private partnerships, and is given to only ten recipients nation-wide each year.

HOUSE IN THE WOOD

FAMILIES The Settlement provides community families with immediate assistance for short term needs, as well as inspiration for the future. Our Emergency Services Program operates a year-round food pantry, with more weekly hours of operation than any other in our neighborhood. We help 2,500 families by distributing over 400,000 pounds of food, 12,000 pounds of clothing, as well as toiletries, baby needs, and household furnishings.

100% of food pantry customers are low-income, but 48% do not receive food stamp assistance. = 100 Families

of public school children each year.

community-minded college graduates, connecting them with youth in and around our West Town neighborhood. Through their own site work and by mobilizing 526 volunteers at 42 events, members contributed over 50,000 hours of service to the community. Members also provided fun opportunities for senior citizens in our Golden Agers club to socialize.

CELEBRATING THE LIFE OF

MR. JOHN WELKE Northwestern Settlement remembers Mr. John Welke, who passed away on February 6, 2015. John was the longestserving Settlement staff member where he ran the woodshop program for over 50 years â&amp;#x20AC;&amp;#x201C; a lifetime in service to his community. He lived his entire life in the house across the alley from the Settlement House.

left: Northwestern Settlement was honored to receive a visit from Wendy Spencer (3rd from left), CEO of AmeriCorpsâ&amp;#x20AC;&amp;#x2122; parent body, the Corporation for National and Community Service.

Prior to joining the Settlement, John was a carpenter who worked on the Pullman Cars, when trains still had beautiful wood interiors. He made a real difference in the lives of thousands of children over the years, teaching them carpentry skills, but even more importantly offering guidance. He was a father figure, a big brother, and a mentor to children and young adults in our community. His memory will live on through the many lives he touched.

THANK YOU TO THOSE WHO HAVE GIVEN THEIR TIME, RESOURCES, AND HEARTS TO OUR INCREDIBLE CAUSE. IT IS BECAUSE OF YOU THAT WE GET TO ACCOMPLISH ALL THAT WE DO.

SETTLEMENT &amp; AUXILIARY BOARDS Officers of the Board

ANNUAL FUND HONOR ROLL Northwestern Settlement would like to extend our sincere gratitude to the following list of special supporters who have generously contributed to the Annual Fund for at least 10 consecutive years. We are honored to have such a caring family of donors.

ANNUAL FUND DONORS Northwestern Settlement depends on the generosity of the many individuals, auxiliary boards, foundations, corporations, and other organizations, committed to our agency’s mission. We are pleased to recognize the following partners who contributed to our general operating fund or specific

TRIBUTE GIFTS Tribute gifts offer a way to commemorate special people or life events, while helping those in need at the same time. Donations can mark milestones such as birthdays or anniversaries, or honor the memory of dear friends or loved ones. The Settlement received gifts in memory and in honor of the following individuals during fiscal year 2015.