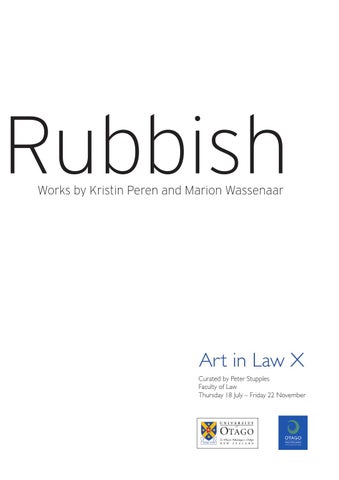 Rubbish An Appreciation of the Work of Kristin Peren and Marion Wassenaar Our world is a ball of rubbish, the detritus of a small bang from the Big Bang. We’ve evolved out of rubbish and are busy creating more. Art rubs our noses in it – the material, the social mess, the confused thought, the desire to act whatever the consequences. The consequences are upon us. Industrialisation has upped the anti. We have so much rubbish we can never recycle it all, but artists cause a pause, urge us to think again…and again. Artists use materials, like charcoal. Marion Wassenaar fired The Evolution of Industry, turning it into charcoal; grilled newspapers into fragile sculptural memorials of transitory events, that could fly away in a puff of wind. Dust to dust… Creative Flower Arranging became the medium for drawing images of apple blossom. Industry creates goods, energy, work. Work creates wealth. Wealth finances research and development. Ingenuity supported by capital creates new ideas to further development. Heroes of labour carry out the hard work. They are the ones to face danger. They work at the coal face. They are celebrated in Marion’s industrial cleaners screen-printed onto survival blankets. But today’s developments are tomorrow’s rubbish. One process is superseded by another – reticulated gas by bottled, coal by hydroelectricity, postal mail by email. Old heroes are for museums. New heroes are less brawny than brainy. Kristin Peren has long been interested in the energies that drive us, the energies of existence, but their exercise bring responsibilities. What we displace we need to replace. ‘I do not consider art as pure creation since it starts with the stimuli of our world, filtered through perception, which, in itself, is inflected with experience. Like any artist, knowledge of the past and present and lived experience informs my work; and the recognition that all knowledge is partial, incomplete. This is the more reason for us to strive toward the light, and to make the necessary connections between the light and the dark; the shadows. …Faced with the magnitude of our world’s ecological crisis, individual effort may appear insignificant, almost powerless. But communities can create a will to change. In this regard, the [photo] print is an ideal tool.’ Kristin’s prints depict moulded rubbish turned into fantastic landscapes, landscapes of the future, without people, without industry, without the romance of nature, with only the mountains and valleys of surreal colour, lit by the lamps of space. ‘It is clear that our environmental policies worldwide are failing, largely because there appears to be a vacuum of thought. [Are we brainy enough?] Many of our actions appear to be dominated with no greater incentive than individual or national profit. It is now more urgent than ever that we consider our eco-system, what it offers and our place within it.’1 Both Marion and Kristin offer us images for thought – about our existence, our history, our present, about ashes to ashes. Peter Stupples 5 June 2013 1

The ever-new utopia My work examines the notion of the Modern Sublime encompassing age-old Utopian aspirations (altered states) and their inevitable demise. Exploring these altered states and contingent changes in relation to technology’s effects on social change, I use historical research within a multi-disciplinary studio practice. Research reveals that historically, utopian altered states are the product of societies that pursue their ‘progressive’ ideals while invariably ignoring not only the cost and illusions involved, but also, preceding instances of paradises found and lost. Photographs explore several of these ‘paradises’ found and lost. My conceptual framework is built upon historical references and focuses on specific societies and individuals. While research offers multiple historical examples of ‘progressive’ societies in search of utopian altered states, it is possible to argue that they are characterised by a singular disregard for the dramatic and irreversible alterations they have, and continue to effect, in the name of progress. Research also reveals that successive utopian altered states have, in a series of guises, been posed as new and original. Exploring these multiple copies of paradise that depict things that either had no reality to begin with, or that no longer have an original, I have conducted my critical examinations in several media. That said, my works, in a single breath, cohere around a single question: What do we value? Kristin Peren

Biography Currently undertaking her Master of Fine Arts degree at the Dunedin School of Art, ecological concerns predominate Kristin Peren’s prints, sculpture and media art. Whether figurative or abstract, Peren’s work engages the viewer in considerations of actions and their consequences in relation to the environment and the sense of identity this nurtures. A large proportion of her practice involves re-working collected rubbish – evidence of our society’s insatiable appetite for excess. Peren has been exhibiting here and internationally for over twenty years and has also been involved in public sculpture with her most recent installation, Free Beauties, taking part in Wellington Lux, an international light festival in June 2013.

Pollution is a necessary result of the inability of man to reform and transform waste. Excerpt from Patti Smith The 25th Floor, 1978 As a collector of discarded material, I pursue an active interest in recycling newspaper through transformative outcomes and unperceived value in this humble material. I transform newspaper into charcoal works that operate similarly to the extraction of gas from coal, leaving a carbon residue. Coal is a limited resource while waste paper offers a recyclable alternative. The ephemerality of charcoal communicates the impermanence of life and the fragility of human existence in a consumerist world overcrowded with waste. The Dunedin Gasworks Museum, with its industrial past and associations to charcoal production, engages with the legacies of the industrial revolution. The image of the gas-masked figure was a partial figure gleaned from the newspaper, of a rescue worker clearing the devastation caused by natural disaster. As the labour force declines, the rescue work force appears to be escalating. A series of reduction linocuts represent anonymous workers in industry occupying the space at the Dunedin Gasworks Museum. In contrast, the gas-masked figures, printed on emergency blankets, offer the notion of the rescue worker replacing the labourer. I relate this image to Caspar David Friedrichâ&amp;#x20AC;&amp;#x2122;s Wanderer above the sea of fog. Where Friedrichâ&amp;#x20AC;&amp;#x2122;s figure was alone and venturing into the unknown, The Wanderer Retreats, the title for this work, is not alone. Alienated by their anonymous appearance, the protective clothing acknowledges the state of the surroundings. How close is one prepared to get to a site of contamination? The devastation is not due to transcending ecological limits but a political inability to seek solutions. Marion Wassenaar

Biography Marion Wassenaar has been exhibiting since 2004. While majoring in the Print Studio at the Dunedin School of Art in her undergraduate programme, her research focused on the recycling of newspaper. Wassenaarâ&amp;#x20AC;&amp;#x2122;s recent outcomes are expressed through print media and organic, sculptural practices that encompass concerns that our living world is in crisis and deliberate on a sustainable practice. Intrinsically, projects have developed to incorporate community interactions within collaborative frameworks. 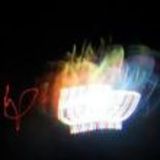