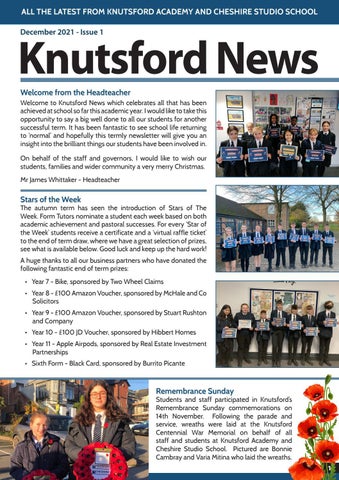 Knutsford News Welcome from the Headteacher Welcome to Knutsford News which celebrates all that has been achieved at school so far this academic year. I would like to take this opportunity to say a big well done to all our students for another successful term. It has been fantastic to see school life returning to ‘normal’ and hopefully this termly newsletter will give you an insight into the brilliant things our students have been involved in. On behalf of the staff and governors, I would like to wish our students, families and wider community a very merry Christmas. Mr James Whittaker - Headteacher

Stars of the Week

Students and staff participated in Knutsford’s Remembrance Sunday commemorations on 14th November. Following the parade and service, wreaths were laid at the Knutsford Centennial War Memorial on behalf of all staff and students at Knutsford Academy and Cheshire Studio School. Pictured are Bonnie Cambray and Varia Mitina who laid the wreaths. 1

On these two pages we cover some of the fantastic enrichment opportunities that have taken place this term. Year 8 MasterChef Competition

After a series of heats, we hosted our MasterChef final in October. Our three finalists; Eden Dixon, Eva McCarthy and Scarlett Bettey all produced restaurant quality food impressing our team of judges, which included a chef from Knutsford restaurant Evuna. Congratulations to Eden who won this very tough competition. Thank you also to Evuna and The Botanist for the kind donations of prizes with vouchers for meals at their restaurants.

We would like to say a huge thank you to Knutsford Community First Responders and Cardiac Risk in The Young who donated and delivered a heart screening day here at the Academy. 90 students received a free heart screen on Tuesday the 30th November, the screen is used to detect any heart conditions that could potentially prove to be life threatening.

This term our Ecology Club for Years 7 to 9 with Mrs Kenny and Mr Gee have been taking care of our school stick insects, making moss terrariums, using the microscopes, cloning cauliflowers and taking plant cuttings. We also did some snail racing before the snails went to sleep for the winter.

The new Year 7 Coding Club for Girls has been a great success this term, the club provides the opportunity for the students to experience coding in a playful way. We have been using scratch to code our own musical instruments, program our own animations, make a game about catching ghosts and program our own talking robot. We hope this has inspired the girls to think about careers in STEM in the future, and what coding has on offer. Well done to all involved.

This term has seen the opportunity to reintroduce the value of the student voice with Student Councils established across the school for each year group, from Year 7 to Sixth Form. Councils are meeting and discussing a range of issues with their teachers and the school leadership team. Members of the Year 7 Council have also had the exciting opportunity to meet with students from our local primary schools at the Knutsford Schools Council Meeting hosted by the Town Mayor.

Charity Work Here at The Academy On Friday 19th November, our Sixth Form Student Council organised a bake sale and pyjama day to fund raise for Children in Need. The day was an excellent success - the Sixth Form raised over £175 towards the cause and had a lovely day.

Year 10 students led by Misk Al-Rawi held a fantastic cake sale for Cerebral Palsy on Friday 12th November, raising over £150. Our Year 7 forms have each chosen a charity to fundraise for this year. By holding events such as bake sales, raffles and sponge the staff, our forms have collectively raised over £500 for their chosen charities so far!

Faculty Spotlight ENGLISH Sixth Form Debating Society On November 23rd, several students from the Sixth Form Debating Society participated in the English Speaking Union’s Mace Competition. The motion for the evening was ‘This house would require fathers to take paternity leave’. Our school was opposing the motion. Although we did not win our heat, there were strong performances from our three debaters, Scarlett, Monty and Leo who not only gave well-crafted speeches but were also skillful in their points of information and impressive rebuttals.

LANGUAGES In September, the Modern Foreign Languages department led a whole school celebration of European Day of Languages. Students were encouraged to discover more about languages to help promote more intercultural understanding of the diverse heritage of our continent. Pupils took part in language treasure hunts and quizzes. Well done to all who took part and contributed to the celebration. Bien Fait!

Art and Design Art &amp; Design students have been enjoying a number trips over the autumn term to develop their skills, this has included: Yorkshire Sculpture Park visit - Year 12 Art &amp; Design students “The trip to the Yorkshire Sculpture Park was great. We walked around whilst looking at, photographing and drawing the many amazing sculptures. The scenery of the park was also a great backdrop for our photographs.” - Poppy Moyser, Year 12

Manchester visit - Year 12 Photography &amp; 3D Design students “Going into Manchester has really inspired my photography work and has allowed me to become much more confident to take photographs in public as that was one thing I was worried about when starting the course.” - Imogen Braun, Year 12 Tatton Park visit - Year 12 Photography &amp; Art students “For this trip we focused on improving and practicing our landscape photography skills. Each of us had prepared our own shoot plan, it was a great opportunity for us to take the composition rules we had previously looked at in class and put them to the test in a real shoot. Tatton also gave us the chance to look at more than just broad landscape photos of the scenery, but to focus on certain aspects, such as the mushrooms, deer and avian life.” - Lois Higgins, Year 12

Students display their work from the Conway Art weekend

Conway Art Weekend - Year 10 “Our weekend trip to the Conway Art Centre was epic! We arrived Friday afternoon and headed straight for our chosen workshops. Some of the classes we could choose from were, ‘into the woods’, ‘exploring landscapes’ and ‘architectural geometry’. All workshops approached the theme ‘space and depth’ in their own, different way. Whilst a number of students were learning to build 3D models, others were off site sketching the scenic views of Snowdonia National Park. By the end of the weekend we held an exhibition which meant that we could finally see and celebrate everyone else’s work.” - Miss E Thomas, Art &amp; Design Teacher

On Wednesday 1st December, students were invited as the first group to visit a brand-new facility called the Aerozone at Manchester Airport. This is a purpose-built careers centre which provided students with the opportunity to find out about all the different jobs at the airport through interactive role play as cabin crew and air traffic controllers, as well as guest speakers including engineering apprenticeships and the CEO of the airport. 5

Sport at Knutsford It has been great to see so many students taking part in such a wide range of sports this term together with the return of competitive fixtures.

Hockey is growing with the help of Knutsford Hockey Club who are supporting training on Wednesdays. The team also had their first game against Hartford in November.

The Year 7 and Year 9 teams eased to victory over St Joseph’s recently, scoring over 40 points each.

A group of Year 11 girls have been attending weekly sessions, trying enrichment activities including boxercise, yoga and weightlifting.

In September, we were pleased to be joined by Supergym Combat Sports Academy. They gave a skilful performance which demonstrated physical strength and discipline. We are delighted that students are now participating at the Supergym Combats Sport Academy as part of our extra-curricular provision.

40 fixtures across Years 7 to 11. Year 8 teams remain unbeaten in the Macc &amp; District League! 90 regular attendees for netball practice on Mondays and Tuesdays.

As part of our Good2Great initiative, students were challenged with a series of fitness tests!

Our female footballers are looking forward to fixtures in the new year. Congratulations to our very own Manchester United player – Anna Fletcher.

WE WILL ROCK YOU Students took to the Bexton Road stage for the first time in two years with the production of We Will Rock You. It was performed over five nights from Tuesday 7th to Saturday 11th December receiving fantastic reviews.

Knutsford News is the official 'new' newsletter for Knutsford Academy and Cheshire Studio School. In the first issue, December 2021, catch up on everything that has been happening across the autumn term including; Stars of the Week, Art and Design Trips, the production of We Will Rock You, plus so much more.