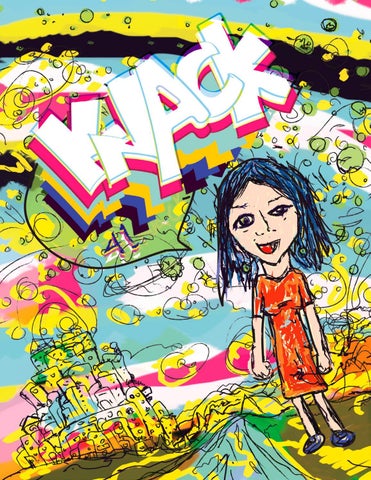 writers You may submit up to 5,000 words and as little as one. We accept simultaneous submissions. No cover letter necessary. All submissions must be 12pt, Times New Roman, single or double-spaced with page numbers and include your name, e-mail, phone number, and genre. KNACK seeks writing of all kinds. We will even consider recipes, reviews, and essays. We seek writers whose work has a distinct voice, is character driven, and is subversive but tasteful. all submissions

10-12 high resolution images of your work. All should include pertinent caption information (name, date, medium, year).

KNACK encourages all submitters to include a portrait, brief biography including name, age, current location, awards, contact info (no more than 200 words), as well as an artist statement, with their submission (no more than 500 words). We believe that your perspective of your work and process is as lucrative as the work itself. This may range from your upbringing and/or education as an artist, what type of work you produce, inspirations, etc. If there are specifications or preferences concerning the way in which your work is to be displayed please include them. Please title files for submission with the name of the piece. This applies for both writing and visual submissions.

KNACK is requesting material to be

reviewed. Reviews extend to any culture-related event that may be happening in the community in which you live. Do you know of an exciting show or exhibition opening? Is there an art collective in your city that deserves some press? Are you a musician, have a band, or are a filmmaker? Send us your CD, movie, or titles of upcoming releases which youâ&amp;#x20AC;&amp;#x2122;d like to see reviewed in KNACK. We believe that reviews are essential to creating a dialogue about the arts. If something thrills you, we want to know about it and share it with the KNACK communityâ&amp;#x20AC;&amp;#x201D;no matter if you live in the New York or Los Angeles, Montreal or Mexico.

All review material can be sent to knackmagazine1@ gmail.com. Please send a copy of CDs and films to 4319 North Greenview Ave, Chicago, IL 60613. If you would like review material returned to you include return postage and packaging. Entries should contain pertinent details such as name, year, release date, websites and links (if applicable). For community events we ask that information be sent up to two months in advance to allow proper time for assignment and review.

We look forward to seeing and hearing your work.

jim franks Jim franks is the author of several discarded novels. He is a founding member and contributor of the online poetry collective many mistypes, and he will write, basically, anything any body asks him, too. Heâ&amp;#x20AC;&amp;#x2122;s currently preparing to release his second poetry book and wondering if he can crash on your couch for awhile.

alexander binder Alexander Binder was born on Halloween night 1976 in the Northern Black Forest / Germany. He’s a self-taught photographer using vintage lenses, prisms and optical toys. His work is rooted in the history of Symbolism and shows a strong passion for the occult and the surreal. Alexander’s photos have been exhibited internationally (Germany, France, UK, Poland, US, Canada, Northern Ireland, Italy, Netherlands). The images were published in VICE, LODOWN, SLEEK, TUSH, TWIN, GUP, Clark, Fotografia, Süddeutsche Zeitung Magazin and many more. His artist books have been shown at the ICP Triennial Photobook Installation – and they are held in the collections of the National Art Library, British Library, Deutsche Nationalbibliothek, Salford Zine Library, Indie Photobook Library, The Library Project and the Médiathèque André Malraux de Strasbourg.

for listeners of Ingrid Michaelson, Regina Spektor, The Weepies best paired with Baking up some pumpkin bread, making a macramé plant hanger, the changing of seasons w h y i t ’s w o r t h l i s t e n i n g t o Hitting PLAY on the first track of Little Hermit’s debut LP, Thanks Mangled Brain, introduces listeners to playful lyrics and a mass of ukulele. This fun female duo, made up of Caitlin Cook and Melody Chebrellan, charms their audience with humorous verses (take a listen to The Procrastination Song for instance), while simultaneously giving us a simple and honest description of the fundamental human struggle that is daily life. Thanks Mangled Brain proves that each and every one of us is faced every day with the conflict between our grand fantasies of ourselves and what actually happens, choosing to relay this information with flippancy and wit. Even if you aren’t into indie-folk music, heavy on the uke, take a listen and Little Hermit may surprise you. favorite tracks Close To, Beans release info 2016, USA track list 1. Close To

RISE TO THE CHALLENGE

Jim franks is the hollow crumbling shell of a confused pansexual narrative. He is standing before you now, pleading to remember the good times you once shared. It wasn’t all bad. Don’t rewrite history simply to justify this. If it’s over, it’s over. But, lets not wax over the fact that this was once something beautiful, something we shared. He knows it’s over, but he just had to see you one last time. And now that he sees that look in your eyes, he can see this is really it, that you don’t love him anymore. Well anyway, he hopes you’ll be happy. He really just wants you to be happy. Honestly. **The poems featured are from his forthcoming poetry book, The Fall of the House of This Guy. Illustrated by Talya Modlin

— well i was tellin him i been to l.a. before but it was before instagram so i imagine it doesn’t count and i lived in new york for the last three years but really i never paid rent so i imagine that doesn’t either and i’ve been to all fifty states except Washington and Oregon Alaska and Hawaii and i never took a shit in Montana or went north of San Fransico so i’m told i have to go back but i’ve seen alot and i can tell you one thing people are people and everything’s everywhere so you’ll never truly be happy until you realise you just can’t be happy all the time

op but my greatest fears and ambitions

bout himself dy know a carpenter had him wrong —

it only gets worse

the older i get

the older i get

it only gets worse the older i get

the older i get the prettier it all seems

the prettier it all seems

in cooperation with the Faust Museum, about the place where Johann Georg FAUST (the protagonist of Christopher Marlowe’s play and Goethe’s Faust) was born around 1480. It’s a tiny village in Southwest Germany which, to this day, has a very unique aura‒thanks to its timbered houses and old buildings. Despite making a traditional photo documentary about this site, I tried to capture the transcendental quality of the place via self-made pinhole lenses, longtime exposure, crystals and color filters.

photo by @loghry _photography clothing by NEO (No End Of)

KNACK Magazine is dedicated to showcasing the work of new artists of all mediums, and to discuss trends and ideas of art communities. KNACK's ultimate aim is to connect and inspire emerging artists. We strive to create a place for artists, writers, designers, thinkers, and innovators to collaborate and produce a unique, informative, and unprecedented web-based magazine each month. 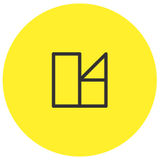