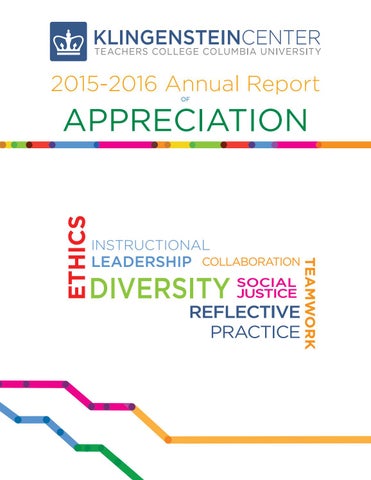 It is my pleasure to share with you the Annual Report for 2015-2016. This Report provides an opportunity to thank our generous supporters, to reflect on the past year and consider the road ahead. Now, approaching our 40th year, the events of the past year underscore the crucial role that educators have in securing the future of our country and our world. Our accomplishments of the past and aspirations for the future demonstrate a commitment to realizing our mission of developing and renewing leaders to make a difference in the world. The foundational pillars of the Klingenstein Center: Instructional Leadership, Collaboration and Teamwork, Ethics, Diversity, Social Justice, and Reflective Practice underpin each of the five programs that the Center offers and guide the formation of each new seminar, workshop, and program that is launched. Each year, nearly 200 educators join the Klingenstein alumni network and it is our intent that these pillars also become the foundation of the professional practice of our distinguished alumni. As you review this Annual Report please take a moment to read the â&#x20AC;&#x153;Why I Giveâ&#x20AC;? testimonials from alumni sharing the reasons they choose to give back. If you are an alumnus who benefited from Klingenstein programs, please pay it forward at whatever level is comfortable for you. If you are a friend of the Klingenstein Center, please help make it possible for capable educators to undertake an experience that will have lasting impact on schools and on students. Along with seminal support from the Klingenstein Fund, gifts from alumni and friends are a tangible expression of the value you place on the work of the Klingenstein Center.

Graduation for the PSL 2015 Cohort in May

Heads of Schools Fellows at Teachers College in January 2016

We now have 4,000 alumni serving as teacher leaders and administrators in schools in six continents. For those of you who cherished the intellectual and collegial culture that shaped your experience, you can be reassured that the culture remains a stalwart of Klingenstein programs. We hold fast to our commitment to realize and continuously re-imagine our mission to shape the leaders who shape the world. Best Wishes, Summer Institute 2016 Cohort at Lawrenceville in June

Leadership Academy class of 2017 in July

“The Klingenstein program provided the most stimulating and visionary peer discussions that I experienced early in my career; it also evolved into a peer cohort of friends that I have called upon regularly for advice and counsel, and they have never let me down. I give with the hope that others are so fortunate as to share a similar experience in the best professional development model I know.“ ~Larry Griffin, ‘HDS 86

WHY I GIVE: “As I engage in my professional and volunteer roles, I am continuously enriched by the Center’s dynamic offerings and the examples set by the ever-innovative Pearl Kane and my talented former classmates. I am stronger because of their wise and skillful approach to leadership. I consider myself a Klingenstein “lifer” and am compelled to pay it forward so that others may also experience transformative programming

“I support the Klingenstein Scholars fund because my time at KSI transformed my career at a pivotal moment. I entered the program as an English teacher, with a singular focus on sharing my favored discipline with students. I left the program with a significantly wider view of schools and my place in them, seeing every corner and every interaction as a classroom. I have had the school leadership bug ever since. Over a decade later, I work on Klingbrief as a way to pay forward the favor I was granted when I had the chance to work with such phenomenal leaders and teachers at KSI. They taught me to read closely and carefully, to follow research where it led me, to cross disciplines fearlessly, and to spread good ideas relentlessly. The process of building Klingbrief each month allows the editorial board to model these characteristics, hopefully strengthening the position of the Klingenstein Center as the premier destination to learn the art and science of school leadership. ~Stephen Valentine, KSI ‘02 Editor, Klingbrief 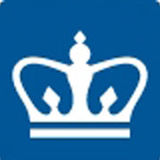 Our 2015-2016 Annual Report of Appreciation for donors and supporters.

Our 2015-2016 Annual Report of Appreciation for donors and supporters.