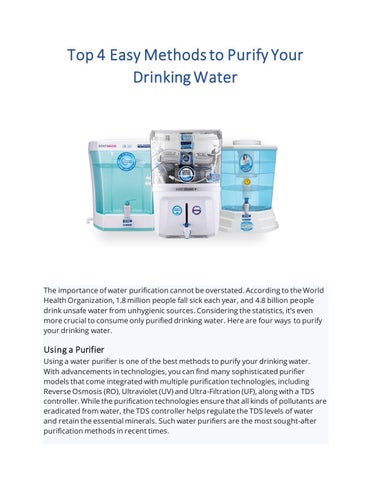 The importance of water purification cannot be overstated. According to the World Health Organization, 1.8 million people fall sick each year, and 4.8 billion people drink unsafe water from unhygienic sources. Considering the statistics, it’s even more crucial to consume only purified drinking water. Here are four ways to purify your drinking water.

Using a Purifier Using a water purifier is one of the best methods to purify your drinking water. With advancements in technologies, you can find many sophisticated purifier models that come integrated with multiple purification technologies, including Reverse Osmosis (RO), Ultraviolet (UV) and Ultra-Filtration (UF), along with a TDS controller. While the purification technologies ensure that all kinds of pollutants are eradicated from water, the TDS controller helps regulate the TDS levels of water and retain the essential minerals. Such water purifiers are the most sought-after purification methods in recent times.

Distillation Water distillation involves boiling source water to create steam and then condensing the steam into freshwater. Distillation works because the vapour/steam is less dense than the liquid water, so it rises and then cools and condenses into fresh liquid water. The water that comes out of the distillation process is free from contaminants. It is one of the most effective ways to purify water but is not easily accessible to the common person.

Boiling Water Boiling water is the easiest method to purify drinking water. This is a method that people have followed for ages. It’s known to kill all the contaminants present in water and make it safe for drinking. However, with boiled water, you are likely to experience a change in its taste.

Chlorination Chlorination is the process of adding chlorine or its compounds to water to remove bacteria and other microorganisms. It is a prevalent process used in water treatment and water purification. The amount of chlorine added to the water depends upon the condition of the water, and it ranges from 0.5 to 2 milligrams per litre to 0.5 to 5 milligrams per litre. Though it gets rid of most of the pollutants, this method alters the taste of drinking water. Out of all these water purification methods, a purifier is the best option as it ensures 100% safe drinking water without altering the taste or odour. 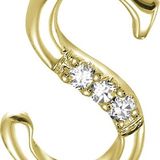 The importance of water purification cannot be overstated. According to the World Health Organization, 1.8 million people fall sick each yea...

The importance of water purification cannot be overstated. According to the World Health Organization, 1.8 million people fall sick each yea...