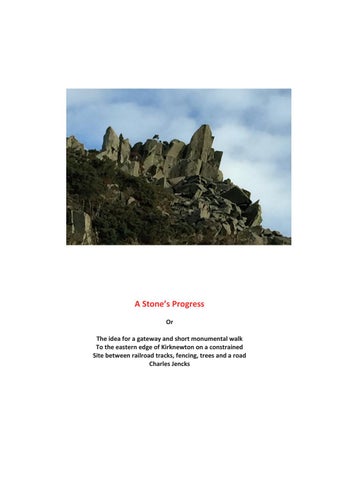 A Stoneâ&amp;#x20AC;&amp;#x2122;s Progress Or The idea for a gateway and short monumental walk To the eastern edge of Kirknewton on a constrained Site between railroad tracks, fencing, trees and a road Charles Jencks

The site’s extreme linearity, with four lines all disappearing in perspective, offers possibilities of drama, a natural order of expectation, surprise and fulfilment. Imagine a linear meander, a green path elevated on the existing earth berm above the road. Gently cut into the trees and shrubs four times it comes upon basalt crystals – columns, fragments, Nature’s Art local to the area. From one end of the site to the other one could see, and understand through installation, a story that has ancient roots. The narrative of primitive beauty emerging from processes deep within the earth. The Giant’s Causeway and Fingal’s Cave. Metaphors and myths grow around such basalt outcrops. Today we have a further understanding, the accounts of geology and chemistry, the way basalt is pushed up by heat through the earth’s crust which then solidifies into crystal forms, often of six smooth sides.

Geometrical order grows from chaotic lava – A Stone’s Progress – which has several stages. The walk will dramatise this Order out of Chaos, the progress and regress of fractal stages. These become a gateway for cars, hikers and those who sit and contemplate.

Kaimes Hill Basalt Columns &amp; Crystal Fragments – Diverse Artforms of Nature Close to the site is the famous Kaimes Hill. It reveals the slow and fast cooling of basalt, in large and small sections, a palisade of prehistoric fortified architecture which later became a quarry. Geological history and erosion have created this diverse Art of Nature. Evident also are the different geometric fragments and oddities of self-organising systems pushed far from equilibrium by heat – sharp blades of basalt. Should one reveal this diversity of form? Recently, fragments have been sculpted and re-laid in dry stone courses to form little shelters for sitting – an echo of the naturally formed seats in prehistory and the Roman fort.

In prehistory defensive barriers intimidated the enemy by forming chaotic routes of attack, breaking up the invading forces into individuals. Chaos was used as an organising principle, and image of defence. Later it became the ordered Chevaux de Frise, below, to fill in the ranks of soldiers. Was this nature mimesis wrong â&amp;#x20AC;&amp;#x201C; too much order out of chaos? How to depict the right ratio?

Heat underneath the earth’s crust forces up the mantle and lava of basalt. If it cools fast and shrinks it forms very small columns; if slowly the columns can be long, four metres and more. The structures crack predominately along a hexagonal geometry but in a fairly chaotic network with polygons of three to twelve sides or more. Nature’s Architecture is caused by heat, the internal chemistry or atomic structure, and cooling at various speeds. Slow=Big vertical, fast=small vertical fracturing. The resultant cellular network is seen as order out of chaos, but at several organisational levels as more heat is applied and the architecture becomes more complex. That is, if frozen at the right moment and speed. We name these different levels with metaphors: Columns, Hexagons, Organ Pipes, Giant’s Causeway, Fingal’s Cave. Higher levels of organisation are seen as progress, less complex as primitive. Drama and direction are read into nature and evolution.

No wonder architects followed Nature as the Supreme Artist. Gandy’s primitive scene shows orangutan-man and woman as the social unit living in their primitive hut of thatch. Models of architectural and cultural evolution can be seen, Fingal’s Cave, and basalt columns serving as seats. In the far background Noah’s Ark settles after the Flood, in the foreground is a natural model for Egyptian architecture, the Palm tree of geometry and beauty. All the basic styles, Gandy hoped, emerged from natural forms. But, knowing what we do about organisational levels, what is the right relation between Nature as Artist, and Culture as Artist?

Organisation out of chaos – Nature &amp; Culture the Artist When heat is continually added to a system it self-organises at many new levels forming patterns. Negative-entropy. With basalt crystals these cells create a random network of different size and shape depending on the composition of the magma, the constraints of space and the heat. This emergence of ever-greater complexity mirrors the evolution of life from inanimate matter and why we often experience dead things as having ‘a life of their own.’ Well, they do, and thus we are natural-born animists. Even more, it parallels the emergence of consciousness, and then culture, from life! Thus the basalt crystal (and the similar Bénard cells, above) become excellent symbols of the self-organising universe, and its diverse beauties. It’s positive arrow of time. And thus we can make a contemporary art of A Stone’s Progress out of the local basalt crystals – from randomness to organisation. On the linear raised earth berm, the 240 metre progress starts at the far right in chaos: or rather, a primitively ordered form of randomness. Here the mixed size and shape of basalt columns are placed in the semi-random layout of what was once the nearby, prehistoric Chevaux de Frise. A zigzag path spills down the moundette which they surmount. This tiny hillock is the first stage of the gateway sequence, first seen from the car (or on foot), as a spikey melange of discordant boulders that, nonetheless, shows subtle emergent orders and geometries. They come from the Kaimes site, in different stages of primitive organisation –

The first stage sets up the gateway sequence from chaos to increasingly complex organisation. Small and medium basalt crystals and fragments are set on RC foundations, amid grass paths, on a moundette giving an irregular way up. Maintenance by Strimmer twice a year sculpts the low growth.

A proposal by Charles Jencks for public art at the gateway to Kirknewton village, near east end of village