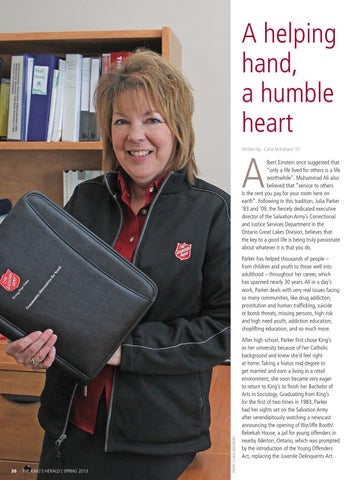 A helping hand, a humble heart Written by: Carla McFarlane ‘07

lbert Einstein once suggested that “only a life lived for others is a life worthwhile”. Muhammad Ali also believed that “service to others is the rent you pay for your room here on earth”. Following in this tradition, Julia Parker ‘83 and ‘09, the fiercely dedicated executive director of the Salvation Army’s Correctional and Justice Services Department in the Ontario Great Lakes Division, believes that the key to a good life is being truly passionate about whatever it is that you do.

Parker has helped thousands of people – from children and youth to those well into adulthood – throughout her career, which has spanned nearly 30 years. All in a day’s work, Parker deals with very real issues facing so many communities, like drug addiction, prostitution and human trafficking, suicide or bomb threats, missing persons, high risk and high need youth, addiction education, shoplifting education, and so much more. After high school, Parker first chose King’s as her university because of her Catholic background and knew she’d feel right at home. Taking a hiatus mid-degree to get married and earn a living in a retail environment, she soon became very eager to return to King’s to finish her Bachelor of Arts in Sociology. Graduating from King’s for the first of two times in 1983, Parker had her sights set on the Salvation Army after serendipitously watching a newscast announcing the opening of Wycliffe Booth/ Rebekah House, a jail for young offenders in nearby Ilderton, Ontario, which was prompted by the introduction of the Young Offenders Act, replacing the Juvenile Delinquents Act. 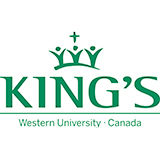