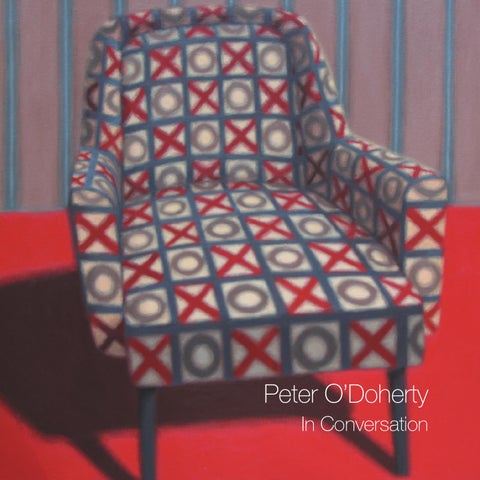 Peter O’Doherty In Conversation The more one listens to the soft, muffled language of Peter O’Doherty’s painting, the simpler things become. Gone are the primary colours, the noise, the hard edges. Gone are the people and the brusque civilian violence of interaction. Instead, here are whispers of memory, made new again in a deliberate exploration of structure and form. O’Doherty looks just beyond the obvious and the figurative for a deeper connection. He removes life’s sharp focus to better show us the truth hidden in a blurred background; found in an oblique glimpse of the everyday. In this conversation, O’Doherty is a very good listener, intent to hear something from within himself. The artist wrestles with the difficult relationship between subject matter and process; colour and composition. Certainly the 1950s and 60s aesthetic is not a new theme, and these streetscapes and objects belong to both yesterday and today. But in these distilled and complex portraits, O’Doherty expresses a less complicated sensibility, rephrasing each subject in his very modern lexicon. Through these broad assemblages of colour and tone that at times nudge the abstract, O’Doherty is sloughing off the detail to better reveal the internal essence of things. But O’Doherty’s take is contemporary, infused with a lightness of touch and palette, and also of spirit. Although indistinct, his view is paradoxically revealing, and he captures each scene with equal measures of brevity and insight, paring back detail like

compositional elements, often as essential as the object/subjects themselves.’ Houses too become anthropomorphised - each frontage is a visage, a face and a character, its windowed eyes blinded and dozey (Murrumbeena Awning), or cock-eyed and loveable (Katoomba Fibro), or its vacant expression impervious to both the elements and the onlooker (Gymea Red Brick). More than mere studies, these are portraits of a generation, records of a relationship, a catalogue of the domestic architecture that moulds O’Doherty’s creativity and expression: ‘I’ve been painting houses and apartment blocks for twenty years. My father was a carpenter/builder and he built all the houses that we grew up in, here and in New Zealand. I see these houses as still lived in, present but gradually disappearing - like history being erased, so [in] my way I’m preserving, recording and archiving them in the face of demolition, development, greed and unstoppable change’. Through his choice of such everyday subject matter, selective colour palette and broad tonalist style, O’Doherty articulates the quietly dissolving shapes of familiarity. His brush sees a tangle of trees in Botany Bay Foreshore become a haiku, brief and succinct; while a filing-cabinet stack of balconies in Brisbane High Rise

Meldrum’s tonalists or chasing Mondrian down a rabbit-hole of structure and colour. More than just a study of

is transformed into the very fabric of modernity.

a tram or house, a chair or plane, they show us the essence of the thing, how it feels, what it means, what it

O’Doherty stares long and hard at the blurred miscellany in life’s background. Indistinct and dreamlike,

gave us, what is lost.

it holds an illusive truth. The conversation is quiet, intuitive and intimate, and much that is mutually

understood remains undescribed by his brush. O’Doherty reveals what we may have missed: the creative

with their own experience of similar interiors. Each chair strikes a pose; reveals its personality – squaring up to the viewer, or presenting itself obliquely; speaking in stripes or checks, or revealing a cropped glimpse of

powerhouse that is our mutual, humble post-war past, and the divine nature of the everyday, of the very human personalities and relationships inherent in all design and architecture, and of the love of life that

its graphic beauty (Aqua Vinyl). O’Doherty explains: ‘With the chairs, even though most of them may hark

drives such a conversation.

back to previous decades, they are everywhere, either as originals or recreations – I paint them because

they are integral to all our lives, used by everybody everyday, as solid and substantial as houses. Plus I like

Author of: The Art of Being Melbourne 2012

their architecture.’ There is a characteristic O’Doherty quietness in these works, despite the loud patterns.

A stillness is also pervasive, anchored by soft-edged shadows that are conjured by the artist as ‘concrete