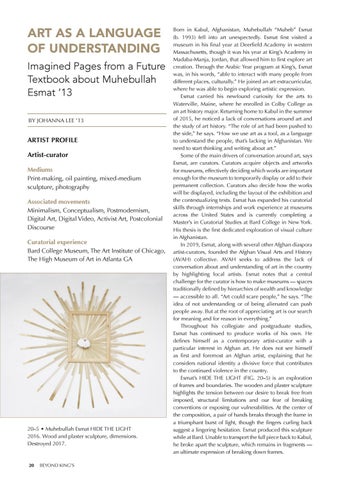 Born in Kabul, Afghanistan, Muhebullah “Muheb” Esmat (b. 1993) fell into art unexpectedly. Esmat first visited a museum in his final year at Deerfield Academy in western Massachusetts, though it was his year at King’s Academy in Madaba-Manja, Jordan, that allowed him to first explore art creation. Through the Arabic Year program at King’s, Esmat was, in his words, “able to interact with many people from different places, culturally.” He joined an art extracurricular, where he was able to begin exploring artistic expression. Esmat carried his newfound curiosity for the arts to Waterville, Maine, where he enrolled in Colby College as an art history major. Returning home to Kabul in the summer of 2015, he noticed a lack of conversations around art and the study of art history. “The role of art had been pushed to the side,” he says. “How we use art as a tool, as a language to understand the people, that’s lacking in Afghanistan. We need to start thinking and writing about art.” Some of the main drivers of conversation around art, says Esmat, are curators. Curators acquire objects and artworks for museums, effectively deciding which works are important enough for the museum to temporarily display or add to their permanent collection. Curators also decide how the works will be displayed, including the layout of the exhibition and the contextualizing texts. Esmat has expanded his curatorial skills through internships and work experience at museums across the United States and is currently completing a Master’s in Curatorial Studies at Bard College in New York. His thesis is the first dedicated exploration of visual culture in Afghanistan. In 2019, Esmat, along with several other Afghan diaspora artist-curators, founded the Afghan Visual Arts and History (AVAH) collective. AVAH seeks to address the lack of conversation about and understanding of art in the country by highlighting local artists. Esmat notes that a central challenge for the curator is how to make museums — spaces traditionally defined by hierarchies of wealth and knowledge — accessible to all. “Art could scare people,” he says. “The idea of not understanding or of being alienated can push people away. But at the root of appreciating art is our search for meaning and for reason in everything.” Throughout his collegiate and postgraduate studies, Esmat has continued to produce works of his own. He defines himself as a contemporary artist-curator with a particular interest in Afghan art. He does not see himself as first and foremost an Afghan artist, explaining that he considers national identity a divisive force that contributes to the continued violence in the country. Esmat’s HIDE THE LIGHT (FIG. 20–5) is an exploration of frames and boundaries. The wooden and plaster sculpture highlights the tension between our desire to break free from imposed, structural limitations and our fear of breaking conventions or exposing our vulnerabilities. At the center of the composition, a pair of hands breaks through the frame in a triumphant burst of light, though the fingers curling back suggest a lingering hesitation. Esmat produced this sculpture while at Bard. Unable to transport the full piece back to Kabul, he broke apart the sculpture, which remains in fragments — an ultimate expression of breaking down frames.

There were many people running out of the mosque, but not one of them seemed to pay us any regard. They wouldn’t even look back, but I knew that you would. Where were you? It’s been a week. They came to take the bodies, they cried, they even buried some. They took pictures of the mosque, and then they started to wash and repaint it. Within a week, it looked like nothing had ever happened. I’m still waiting for you, hopeful of your return. Even if you never return, I will always be reminded by the stains of your sweat, tears, and blood that I carry on my skin.

While HIDE THE LIGHT represents universal themes through abstraction, 08.25.17 (FIG. 20–5) memorializes a specific event in Afghanistan. Esmat was in Kabul when an Afghan affiliate of the Islamic State (also known as ISIS) carried out an hours-long attack on a Shi’ite mosque in the north of the city. Esmat was struck by how quickly the city seemed to move on after the attack. “The next day after an attack that took 20, 30 lives, the street gets washed up, the blood is gone, and people just walk about as normal,” he says. “The violence has become so routine that we have become very numb.” 08.25.17 captures the horror of the massacre without depicting the violence directly, in contrast with the tendency of the news media’s constant showing of victims’ bodies, Esmat explains. He says he had noticed a recurring effect of such attacks, especially on mosques, schools and other places of public gathering: in the wake of the atrocity, shoes of those present would be left behind. Even those who were able to escape with their lives would tend not to return because of the associated trauma. Esmat collected the abandoned shoes and worked with two photographers to memorialize the attack by capturing fragments of the lives the victims left behind. “Sometimes these ephemeral things can tell a much stronger story, and they offer a different view than usual,” he says. “Our attention spans have gotten so much shorter and we’re used to stories of atrocities being told in the same way, so we become numb.” The photographs are accompanied by a letter written from the perspective of one of the pairs of shoes (BOX 20–2). 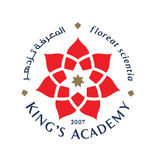 ​ Art as a Language of Understanding

​ Art as a Language of Understanding