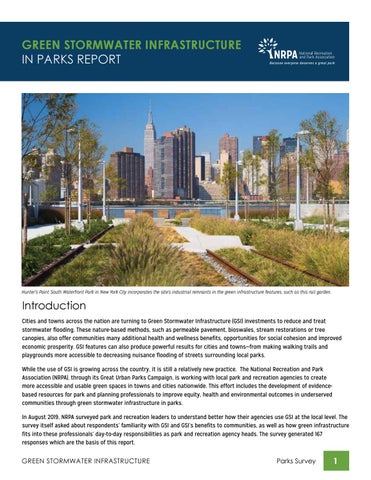 Introduction Cities and towns across the nation are turning to Green Stormwater Infrastructure (GSI) investments to reduce and treat stormwater flooding. These nature-based methods, such as permeable pavement, bioswales, stream restorations or tree canopies, also offer communities many additional health and wellness benefits, opportunities for social cohesion and improved economic prosperity. GSI features can also produce powerful results for cities and towns—from making walking trails and playgrounds more accessible to decreasing nuisance flooding of streets surrounding local parks. While the use of GSI is growing across the country, it is still a relatively new practice. The National Recreation and Park Association (NRPA), through its Great Urban Parks Campaign, is working with local park and recreation agencies to create more accessible and usable green spaces in towns and cities nationwide. This effort includes the development of evidencebased resources for park and planning professionals to improve equity, health and environmental outcomes in underserved communities through green stormwater infrastructure in parks. In August 2019, NRPA surveyed park and recreation leaders to understand better how their agencies use GSI at the local level. The survey itself asked about respondents’ familiarity with GSI and GSI’s benefits to communities, as well as how green infrastructure fits into these professionals’ day-to-day responsibilities as park and recreation agency heads. The survey generated 167 responses which are the basis of this report.

Key Findings While green stormwater infrastructure is not a new practice, cities and towns do not commonly apply these solutions as much as they do traditional grey infrastructure (e.g., pipes, pumps, ditches and detention pond) for stormwater management. While park and recreation leaders have some familiarity with GSI and its potential benefits, most indicate that GSI investments are not common at their agencies. Overall, survey responses suggest a need for more GSI resources to help identify funding sources to support both project construction and ongoing maintenance. Unfortunately, many park and recreation agencies are not collaborating with neighborhood groups or conservation nonprofits at ground-level—an essential element for successful and thriving green infrastructure programs over the long-term.

is park and recreation’s most common GSI activity

Familiarity with GSI and Its Benefits One way to gain political and community support for GSI projects is to build an understanding of the broad benefits of such projects. For example, if a local park and recreation agency plants bioswales and other GSI features near a walking trail to mitigate nearby flooding issues, it may result in members of the community using the trail more often. This in turn can lead to enhanced health and wellness among community members and greater socialization. Children and their families gain improved access to play spaces as the GSI investment decreases stormwater flooding. While many park and recreation professionals view GSI as a conservation practice that reduces flooding and enhances water quality, they are less likely to be aware of other positive impacts of such investments, including: • Environmental benefits (enhanced water, air, habitat and wildlife) (82 percent of survey respondents are familiar with these benefits) • Health and wellness (physical and mental improvements from increased physical activity and reduced stress) (62 percent) • Social (public safety, community socializing) (57 percent) • Economic (55 percent)

Park and Recreation Professionals Are Most Familiar with GSI's Environmental Benefits

Interacting with elected officials on GSI in parks

Advocating for local/state policies to fund/allow GSI in parks

Park and recreation agencies rely on outside partners—both within the local government and with like-minded external organizations—for the creation and on-going maintenance of green infrastructure investments in their communities. Upkeep and care of GSI investments are critical to sustaining the benefits of green infrastructure. Hence, most park and recreation agencies work closely with their city, town and/or county public works departments as routine collaborators for advancing green infrastructure in parks. Similarly, just under half of agencies also collaborate with their community’s water and sewage utility (48 percent) on these efforts; 37 percent do so with some other local government entity. Project funding and long-term maintenance are two areas in which it is critical for park and recreation agencies to develop strong partnerships. On the funding side, agencies need to make a convincing case for GSI to their local city or county council—or the mayor’s or county executive’s office—given that green infrastructure projects may compete with police and fire departments, schools and many other priorities for precious budget dollars. With respect to maintenance, in addition to collaborating with their local public works department, agencies also rely on neighborhood associations and other groups (e.g., conservation nonprofits and/or volunteers) to ensure that green infrastructure will result in maximum benefits to the local community over the long-term. If maintenance falls by the wayside, green infrastructure loses the ability to treat and divert stormwater, and thus will not result in any other benefits to support the health of communities. While park and recreation agency professionals report that they frequently collaborate with other public works departments, most have not yet developed other relationships important for funding, maintenance and other key tasks necessary to successful GSI efforts: • Neighborhood groups (37 percent of agencies collaborate with such groups) • Conservation groups (32 percent) • Community-based organizations (30 percent)

Additional GSI Resources Sought Green infrastructure is a fairly new practice in the world of parks and recreation. While most park and recreation professionals are aware of GSI and its benefits, there are many opportunities to build on their current level of knowledge and experience to move GSI projects forward. The development of these skills can help park and recreation leaders promote GSI at their agencies. For example, less than half of park and recreation leaders are confident in their ability to navigate local government policies in order to advance GSI projects (45 percent), communicate GSI’s benefits to local stakeholders (43 percent) or evaluate the benefits of these projects (39 percent). Further, park and recreation leaders are seeking greater assistance in persuading local political leaders and other A constructed wetland built in a community park in a formerly industrialized stakeholders on the critical role green infrastructure area of Chattanooga, TN collects and cleans runoff before it flows into the investments in parks should play in accomplishing the goals of Tennessee River local planning activities. Only 36 percent of survey respondents report being knowledgeable about how to be successful in integrating GSI at parks as a part of the local planning process. As a result, fewer than three in ten park and recreation leaders describe themselves as knowledgeable in how to successfully secure funding for the construction and maintenance of green infrastructure investments within their parks.

Communicating about benefits to community and/or elected officials

For all the progress made in the area of green infrastructure in recent years, we have only begun to scratch the surface of using the vast network of public parks and greenspace to manage stormwater in our communities. But as the results of this survey demonstrate, park and recreation leaders want to develop their own (and their team’s) knowledge of GSI best practices, not only for securing needed funding, but also for how to design, construct and maintain these investments. One set of sought-out resources focuses on securing public support and sustained funding for GSI investments. These include building the knowledge base of not only how to secure funding, but also how to bring parks and recreation more broadly to the planning table in local towns, cities and counties: Local workers install stormwater management device in Prince George’s County, MD

• Learn creative ways to secure and sustain funding for GSI investments (cited by 84 percent of survey respondents) • How to communicate GSI’s benefits to community leaders, senior staff and elected officials (66 percent) • How to incorporate GSI into whole park systems and citywide planning (65 percent) • How to create and advocate for GSI-friendly policies at the local level (50 percent)

How to Incorporating GSI communicate the into whole park benefits of GSI in systems and cityparks to community, wide planning senior staff and/or elected officials

Training on design, construction, and maintenance

Creating and advocating for GSI-friendly policies at the local level

Conclusion Green stormwater infrastructure in parks can have profound impacts on the environmental, social and economic health of communities. By treating and diverting stormwater, GSI can reduce flooding, improve water quality and enhance opportunities for community members to exercise and socialize. But there is more that can be done. First, while the park and recreation community is becoming more aware of the above benefits of GSI, park and recreation professionals’ awareness of the economic benefits from GSI—such as job skills training—lags compared to that regarding the conservation and health-related benefits. Second, the survey results show that while agencies have a relatively strong amount of experience implementing GSI on the ground, agency staff often lack the “on-the-ground” experience, guidance and support they need to advocate for project funding, to track the benefits of projects over time, and to engage in other key actions that lead to effective GSI practices across park systems. Until agencies become more adept in advocating for GSI funding and using data to support their case, it will be difficult for green infrastructure to become a commonplace fixture in local parks, especially given the stiff competition for budget dollars among local government agencies. As NRPA’s research shows, communities become more engaged when agencies communicate GSI’s benefits, which in turn, can improve funding for future initiatives. To address the above issues, NRPA has developed two free resources which are available on the Great Urban Parks Campaign Resources page: • Green Infrastructure in Parks provides a high-level overview of construction and maintenance best practices for GSI in parks; and • The Green Infrastructure Evaluation Framework gives you research-informed text, tools, and downloadable resources to measure the benefits of your GSI projects in parks 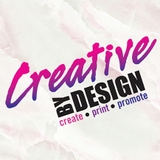