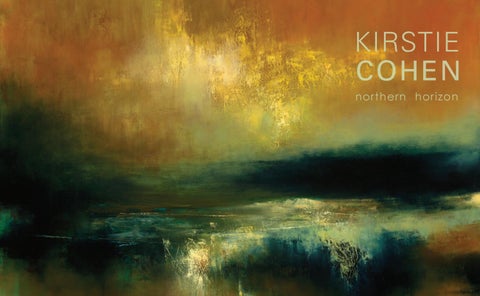 All of the works shown are available for purchase on receipt of this catalogue. Please contact the gallery for further information.

NORTHERN HORIZON new work by KIRSTIE COHEN It is a great privilege to exhibit “Northern Horizon”,

sized canvases too: warm and rich, glowing even in their

Cohen rarely paints a specific place; for her, the liberty

Kirstie Cohen’s largest body of work to date here in

to incorporate intuition and buried memories is more

hovering in the dark-blue sky. I know that when the show

important than any topographic exactness. This freedom

a remarkable feat in this show, not only in being able

is hung, these paintings will look magnificent in the

to explore form, colour and texture with a poetic

gallery’s gothic interior, and eventually, as they find their

imagination allows her to trek more deeply in to the

voluminous and demanding space, but in the ambition

way onto someone’s wall, they will look just as good.

and scope of the work, which places Cohen firmly in a

venerable tradition of Scottish landscape painting. As I

only allowed a brief gaze at these. It is an Aladdin’s cave,

write this, Cohen’s studio is abundant with the fruits of

every work a gem.

It is where she manipulates paint into compositions that

finished large triptychs. Her mastery of the triptych has

fire her feelings of artistic adventure and fulfilment.

evolved from previous years. There are new colours,

This is never an easy process and rarely a final one. Too

more contrast and energy in them. Behind the easel

abstract and a painting drifts into unconnectable realms,

inspired by birds, figures and horses. I am briefly shown

with you. Kirstie Cohen always gets this right. At first you

them and notice at once the tremendous energy. The

feel as if you know the subject; a northern horizon, sea,

most spectacular of these is ‘Suspension’ which is over

mountains and mist. But as you live with it, the sea in a

a depth of paint and a vibrant dominance of orange. I

may well change into waves. They are dynamic spaces

love the new direction. There are more conventionally

where your imagination can dwell.

world of paint itself, and to bring back treasures from this new realm. They are also psychologically grounded paintings. At their heart are the places Cohen has known; the east coast seas of North Berwick where she grew up, the hills which her studio overlooks and, around this, the mountains, islands and coasts of the Highlands. It is to the north and its remote horizons that Cohen looks and the results are landscapes of sublime power, a multiplying snapshot of wilderness in flux.

KIRSTIE COHEN was born in Edinburgh in 1963.

She studied at Glasgow School of Art from 1983 â&#x20AC;&#x201C; 1987 and after completing a degree she was offered a place on the Post graduate course from 1987 â&#x20AC;&#x201C; 1988. Cohen turned professional with her first solo Exhibition in London in 1990. She has subsequently had many solo and mixed exhibitions nationwide. She now lives and works in the Highlands of Scotland. 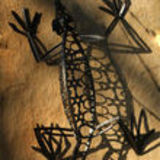