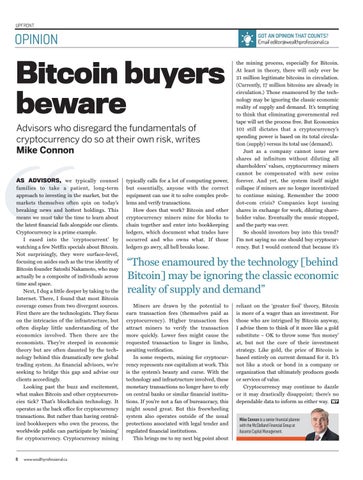 GOT AN OPINION THAT COUNTS? Email editor@wealthprofessional.ca

Bitcoin buyers beware Advisors who disregard the fundamentals of cryptocurrency do so at their own risk, writes Mike Connon AS ADVISORS, we typically counsel families to take a patient, long-term approach to investing in the market, but the markets themselves often spin on today’s breaking news and hottest holdings. This means we must take the time to learn about the latest financial fads alongside our clients. Cryptocurrency is a prime example. I eased into the ‘cryptocurrent’ by watching a few Netflix specials about Bitcoin. Not surprisingly, they were surface-level, focusing on asides such as the true identity of Bitcoin founder Satoshi Nakamoto, who may actually be a composite of individuals across time and space. Next, I dug a little deeper by taking to the Internet. There, I found that most Bitcoin coverage comes from two divergent sources. First there are the technologists. They focus on the intricacies of the infrastructure, but often display little understanding of the economics involved. Then there are the economists. They’re steeped in economic theory but are often daunted by the technology behind this dramatically new global trading system. As financial advisors, we’re seeking to bridge this gap and advise our clients accordingly. Looking past the buzz and excitement, what makes Bitcoin and other cryptocurrencies tick? That’s blockchain technology. It operates as the back office for cryptocurrency transactions. But rather than having centralized bookkeepers who own the process, the worldwide public can participate by ‘mining’ for cryptocurrency. Cryptocurrency mining

typically calls for a lot of computing power, but essentially, anyone with the correct equipment can use it to solve complex problems and verify transactions. How does that work? Bitcoin and other cryptocurrency miners mine for blocks to chain together and enter into bookkeeping ledgers, which document what trades have occurred and who owns what. If those ledgers go awry, all hell breaks loose.

the mining process, especially for Bitcoin. At least in theory, there will only ever be 21 million legitimate bitcoins in circulation. (Currently, 17 million bitcoins are already in circulation.) Those enamoured by the technology may be ignoring the classic economic reality of supply and demand. It’s tempting to think that eliminating governmental red tape will set the process free. But Economics 101 still dictates that a cryptocurrency’s spending power is based on its total circulation (supply) versus its total use (demand). Just as a company cannot issue new shares ad infinitum without diluting all shareholders’ values, cryptocurrency miners cannot be compensated with new coins forever. And yet, the system itself might collapse if miners are no longer incentivized to continue mining. Remember the 2000 dot-com crisis? Companies kept issuing shares in exchange for work, diluting shareholder value. Eventually the music stopped, and the party was over. So should investors buy into this trend? I’m not saying no one should buy cryptocurrency. But I would contend that because it’s

“Those enamoured by the technology [behind Bitcoin] may be ignoring the classic economic reality of supply and demand” Miners are drawn by the potential to earn transaction fees (themselves paid as cryptocurrency). Higher transaction fees attract miners to verify the transaction more quickly. Lower fees might cause the requested transaction to linger in limbo, awaiting verification. In some respects, mining for cryptocurrency represents raw capitalism at work. This is the system’s beauty and curse. With the technology and infrastructure involved, these monetary transactions no longer have to rely on central banks or similar financial institutions. If you’re not a fan of bureaucracy, this might sound great. But this freewheeling system also operates outside of the usual protections associated with legal tender and regulated financial institutions. This brings me to my next big point about

reliant on the ‘greater fool’ theory, Bitcoin is more of a wager than an investment. For those who are intrigued by Bitcoin anyway, I advise them to think of it more like a gold substitute – OK to throw some ‘fun money’ at, but not the core of their investment strategy. Like gold, the price of Bitcoin is based entirely on current demand for it. It’s not like a stock or bond in a company or organization that ultimately produces goods or services of value. Cryptocurrency may continue to dazzle or it may drastically disappoint; there’s no dependable data to inform us either way. Mike Connon is a senior financial planner with the McClelland Financial Group at Assante Capital Management.