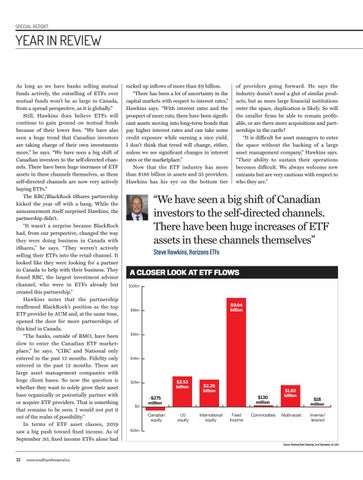 As long as we have banks selling mutual funds actively, the outselling of ETFs over mutual funds won’t be as large in Canada, from a spread perspective, as it is globally.” Still, Hawkins does believe ETFs will continue to gain ground on mutual funds because of their lower fees. “We have also seen a huge trend that Canadian investors are taking charge of their own investments more,” he says. “We have seen a big shift of Canadian investors to the self-directed channels. There have been huge increases of ETF assets in these channels themselves, as these self-directed channels are now very actively buying ETFs.” The RBC/BlackRock iShares partnership kicked the year off with a bang. While the announcement itself surprised Hawkins, the partnership didn’t. “It wasn’t a surprise because BlackRock had, from our perspective, changed the way they were doing business in Canada with iShares,” he says. “They weren’t actively selling their ETFs into the retail channel. It looked like they were looking for a partner in Canada to help with their business. They found RBC, the largest investment advisor channel, who were in ETFs already but created this partnership.” Hawkins notes that the partnership reaffirmed BlackRock’s position as the top ETF provider by AUM and, at the same time, opened the door for more partnerships of this kind in Canada. “The banks, outside of BMO, have been slow to enter the Canadian ETF marketplace,” he says. “CIBC and National only entered in the past 12 months. Fidelity only entered in the past 12 months. These are large asset management companies with huge client bases. So now the question is whether they want to solely grow their asset base organically or potentially partner with or acquire ETF providers. That is something that remains to be seen. I would not put it out of the realm of possibility.” In terms of ETF asset classes, 2019 saw a big push toward fixed income. As of September 30, fixed income ETFs alone had

racked up inflows of more than $9 billion. “There has been a lot of uncertainty in the capital markets with respect to interest rates,” Hawkins says. “With interest rates and the prospect of more cuts, there have been significant assets moving into long-term bonds that pay higher interest rates and can take some credit exposure while earning a nice yield. I don’t think that trend will change, either, unless we see significant changes in interest rates or the marketplace.” Now that the ETF industry has more than $188 billion in assets and 35 providers, Hawkins has his eye on the bottom tier

of providers going forward. He says the industry doesn’t need a glut of similar products, but as more large financial institutions enter the space, duplication is likely. So will the smaller firms be able to remain profitable, or are there more acquisitions and partnerships in the cards? “It is difficult for asset managers to enter the space without the backing of a large asset management company,” Hawkins says. “Their ability to sustain their operations becomes difficult. We always welcome new entrants but are very cautious with respect to who they are.”

“We have seen a big shift of Canadian investors to the self-directed channels. There have been huge increases of ETF assets in these channels themselves” Steve Hawkins, Horizons ETFs A CLOSER LOOK AT ETF FLOWS $10bn