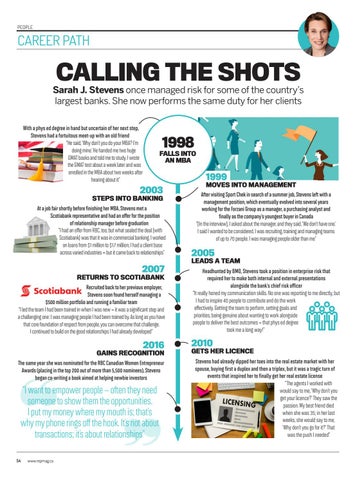 Sarah J. Stevens once managed risk for some of the country’s largest banks. She now performs the same duty for her clients With a phys ed degree in hand but uncertain of her next step, Stevens had a fortuitous meet-up with an old friend “He said, ‘Why don’t you do your MBA? I’m doing mine.’ He handed me two huge GMAT books and told me to study. I wrote the GMAT test about a week later and was enrolled in the MBA about two weeks after hearing about it”

FALLS INTO AN MBA

At a job fair shortly before finishing her MBA, Stevens met a Scotiabank representative and had an offer for the position of relationship manager before graduation “I had an offer from RBC, too, but what sealed the deal [with Scotiabank] was that it was in commercial banking. I worked on loans from $1 million to $17 million; I had a client base across varied industries – but it came back to relationships”

RETURNS TO SCOTIABANK Recruited back to her previous employer, Stevens soon found herself managing a $500 million portfolio and running a familiar team “I led the team I had been trained in when I was new – it was a significant step and a challenging one: I was managing people I had been trained by. As long as you have that core foundation of respect from people, you can overcome that challenge. I continued to build on the good relationships I had already developed”

GAINS RECOGNITION The same year she was nominated for the RBC Canadian Women Entrepreneur Awards (placing in the top 200 out of more than 5,500 nominees), Stevens began co-writing a book aimed at helping newbie investors

“I want to empower people – often they need someone to show them the opportunities. I put my money where my mouth is; that’s why my phone rings off the hook. It’s not about transactions; it’s about relationships” 54

MOVES INTO MANAGEMENT After visiting Sport Chek in search of a summer job, Stevens left with a management position, which eventually evolved into several years working for the Forzani Group as a manager, a purchasing analyst and finally as the company’s youngest buyer in Canada “[In the interview], I asked about the manager, and they said, ‘We don’t have one.’ I said I wanted to be considered. I was recruiting, training and managing teams of up to 70 people. I was managing people older than me”

LEADS A TEAM Headhunted by BMO, Stevens took a position in enterprise risk that required her to make both internal and external presentations alongside the bank’s chief risk officer “It really honed my communication skills. No one was reporting to me directly, but I had to inspire 40 people to contribute and do the work effectively. Getting the team to perform, setting goals and priorities, being genuine about wanting to work alongside people to deliver the best outcomes – that phys ed degree took me a long way!”

GETS HER LICENCE Stevens had already dipped her toes into the real estate market with her spouse, buying first a duplex and then a triplex, but it was a tragic turn of events that inspired her to finally get her real estate license “The agents I worked with would say to me, ‘Why don’t you get your licence?’ They saw the passion. My best friend died when she was 35; in her last weeks, she would say to me, ‘Why don’t you go for it?’ That was the push I needed”