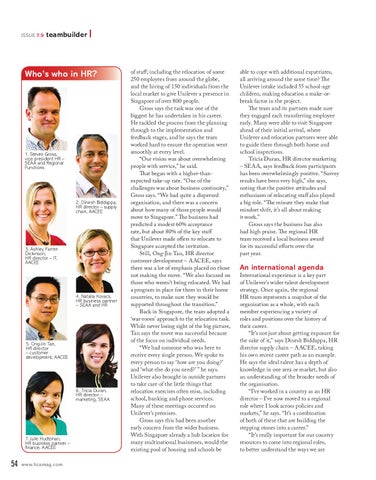 of staff; including the relocation of some 250 employees from around the globe, and the hiring of 150 individuals from the local market to give Unilever a presence in Singapore of over 800 people. Gross says the task was one of the biggest he has undertaken in his career. He tackled the process from the planning through to the implementation and feedback stages, and he says the team worked hard to ensure the operation went smoothly at every level. “Our vision was about overwhelming people with service,” he said. That began with a higher-thanexpected take-up rate. “One of the challenges was about business continuity,” Gross says. “We had quite a dispersed organisation, and there was a concern about how many of those people would move to Singapore.” The business had predicted a modest 60% acceptance rate, but about 80% of the key staff that Unilever made offers to relocate to Singapore accepted the invitation. Still, Ong-Jin Tan, HR director customer development – AACEE, says there was a lot of emphasis placed on those not making the move. “We also focused on those who weren’t being relocated. We had a program in place for them in their home countries, to make sure they would be supported throughout the transition.” Back in Singapore, the team adopted a ‘war-room’ approach to the relocation task. While never losing sight of the big picture, Tan says the move was successful because of the focus on individual needs. “We had someone who was here to receive every single person. We spoke to every person to say ‘how are you doing?’ and ‘what else do you need?’ ” he says. Unilever also brought in outside partners to take care of the little things that relocation exercises often miss, including school, banking and phone services. Many of these meetings occurred on Unilever’s premises. Gross says this had been another early concern from the wider business. With Singapore already a hub location for many multinational businesses, would the existing pool of housing and schools be

able to cope with additional expatriates, all arriving around the same time? The Unilever intake included 55 school-age children, making education a make-orbreak factor in the project. The team and its partners made sure they engaged each transferring employee early. Many were able to visit Singapore ahead of their initial arrival, where Unilever and relocation partners were able to guide them through both home and school inspections. Tricia Duran, HR director marketing – SEAA, says feedback from participants has been overwhelmingly positive. “Survey results have been very high,” she says, noting that the positive attitudes and enthusiasm of relocating staff also played a big role. “The minute they make that mindset shift, it’s all about making it work.” Gross says the business has also had high praise. The regional HR team received a local business award for its successful efforts over the past year.

International experience is a key part of Unilever’s wider talent development strategy. Once again, the regional HR team represents a snapshot of the organisation as a whole, with each member experiencing a variety of roles and positions over the history of their career. “It’s not just about getting exposure for the sake of it,” says Dinesh Biddappa, HR director supply chain – AACEE, taking his own recent career path as an example. He says the ideal talent has a depth of knowledge in one area or market, but also an understanding of the broader needs of the organisation. “I’ve worked in a country as an HR director – I’ve now moved to a regional role where I look across policies and markets,” he says. “It’s a combination of both of these that are building the stepping stones into a career.” “It’s really important for our country resources to come into regional roles, to better understand the ways we are

The magazine for decision makers who deal with people.