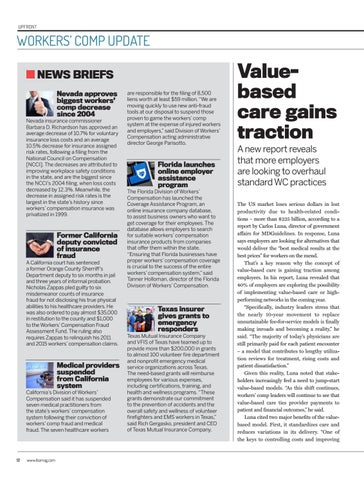 Nevada insurance commissioner Barbara D. Richardson has approved an average decrease of 10.7% for voluntary insurance loss costs and an average 10.5% decrease for insurance assigned risk rates, following a filing from the National Council on Compensation [NCCI]. The decreases are attributed to improving workplace safety conditions in the state, and are the biggest since the NCCI’s 2004 filing, when loss costs decreased by 12.3%. Meanwhile, the decrease in assigned risk rates is the largest in the state’s history since workers’ compensation insurance was privatized in 1999.

A California court has sentenced a former Orange County Sherriff’s Department deputy to six months in jail and three years of informal probation. Nicholas Zappas pled guilty to six misdemeanor counts of insurance fraud for not disclosing his true physical abilities to his healthcare providers. He was also ordered to pay almost $35,000 in restitution to the county and $1,000 to the Workers’ Compensation Fraud Assessment Fund. The ruling also requires Zappas to relinquish his 2011 and 2015 workers’ compensation claims.

are responsible for the filing of 8,500 liens worth at least $59 million. “We are moving quickly to use new anti-fraud tools at our disposal to suspend those proven to game the workers’ comp system at the expense of injured workers and employers,” said Division of Workers’ Compensation acting administrative director George Parisotto.

Texas Mutual Insurance Company and VFIS of Texas have teamed up to provide more than $200,000 in grants to almost 100 volunteer fire department and nonprofit emergency medical service organizations across Texas. The need-based grants will reimburse employees for various expenses, including certifications, training, and health and wellness programs. “These grants demonstrate our commitment to the prevention of accidents and the overall safety and wellness of volunteer firefighters and EMS workers in Texas,” said Rich Gergasko, president and CEO of Texas Mutual Insurance Company.

Valuebased care gains traction A new report reveals that more employers are looking to overhaul standard WC practices The US market loses serious dollars in lost productivity due to health-related conditions – more than $225 billion, according to a report by Carlos Luna, director of government affairs for MDGuidelines. In response, Luna says employers are looking for alternatives that would deliver the “best medical results at the best prices” for workers on the mend. That’s a key reason why the concept of value-based care is gaining traction among employers. In his report, Luna revealed that 40% of employers are exploring the possibility of implementing value-based care or highperforming networks in the coming year. “Specifically, industry leaders stress that the nearly 10-year movement to replace unsustainable fee-for-service models is finally making inroads and becoming a reality,” he said. “The majority of today’s physicians are still primarily paid for each patient encounter – a model that contributes to lengthy utilization reviews for treatment, rising costs and patient dissatisfaction.” Given this reality, Luna noted that stakeholders increasingly feel a need to jump-start value-based models. “As this shift continues, workers’ comp leaders will continue to see that value-based care ties provider payments to patient and financial outcomes,” he said. Luna cited two major benefits of the valuebased model. First, it standardizes care and reduces variations in its delivery. “One of the keys to controlling costs and improving