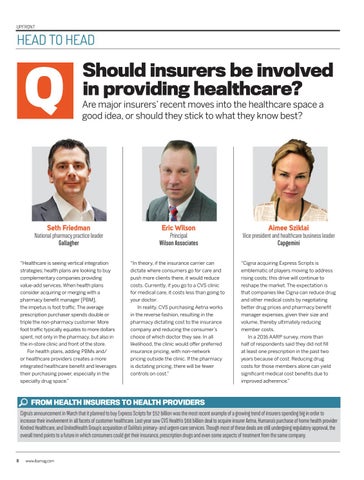 Should insurers be involved in providing healthcare? Are major insurers’ recent moves into the healthcare space a good idea, or should they stick to what they know best?

“Healthcare is seeing vertical integration strategies; health plans are looking to buy complementary companies providing value-add services. When health plans consider acquiring or merging with a pharmacy benefit manager [PBM], the impetus is foot traffic. The average prescription purchaser spends double or triple the non-pharmacy customer. More foot traffic typically equates to more dollars spent, not only in the pharmacy, but also in the in-store clinic and front of the store. For health plans, adding PBMs and/ or healthcare providers creates a more integrated healthcare benefit and leverages their purchasing power, especially in the specialty drug space.”

“In theory, if the insurance carrier can dictate where consumers go for care and push more clients there, it would reduce costs. Currently, if you go to a CVS clinic for medical care, it costs less than going to your doctor. In reality, CVS purchasing Aetna works in the reverse fashion, resulting in the pharmacy dictating cost to the insurance company and reducing the consumer’s choice of which doctor they see. In all likelihood, the clinic would offer preferred insurance pricing, with non-network pricing outside the clinic. If the pharmacy is dictating pricing, there will be fewer controls on cost.”

“Cigna acquiring Express Scripts is emblematic of players moving to address rising costs; this drive will continue to reshape the market. The expectation is that companies like Cigna can reduce drug and other medical costs by negotiating better drug prices and pharmacy benefit manager expenses, given their size and volume, thereby ultimately reducing member costs. In a 2016 AARP survey, more than half of respondents said they did not fill at least one prescription in the past two years because of cost. Reducing drug costs for those members alone can yield significant medical cost benefits due to improved adherence.”

FROM HEALTH INSURERS TO HEALTH PROVIDERS Cigna’s announcement in March that it planned to buy Express Scripts for $52 billion was the most recent example of a growing trend of insurers spending big in order to increase their involvement in all facets of customer healthcare. Last year saw CVS Health’s $68 billion deal to acquire insurer Aetna, Humana’s purchase of home health provider Kindred Healthcare, and UnitedHealth Group’s acquisition of DaVita’s primary- and urgent-care services. Though most of these deals are still undergoing regulatory approval, the overall trend points to a future in which consumers could get their insurance, prescription drugs and even some aspects of treatment from the same company.