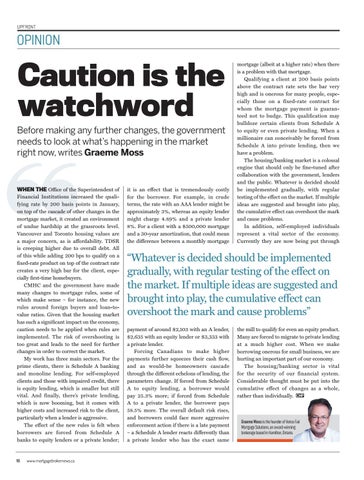 Caution is the watchword Before making any further changes, the government needs to look at what’s happening in the market right now, writes Graeme Moss

WHEN THE Office of the Superintendent of Financial Institutions increased the qualifying rate by 200 basis points in January, on top of the cascade of other changes in the mortgage market, it created an environment of undue hardship at the grassroots level. Vancouver and Toronto housing values are a major concern, as is affordability. TDSR is creeping higher due to overall debt. All of this while adding 200 bps to qualify on a fixed-rate product on top of the contract rate creates a very high bar for the client, especially first-time homebuyers. CMHC and the government have made many changes to mortgage rules, some of which make sense – for instance, the new rules around foreign buyers and loan-tovalue ratios. Given that the housing market has such a significant impact on the economy, caution needs to be applied when rules are implemented. The risk of overshooting is too great and leads to the need for further changes in order to correct the market. My work has three main sectors. For the prime clients, there is Schedule A banking and monoline lending. For self-employed clients and those with impaired credit, there is equity lending, which is smaller but still vital. And finally, there’s private lending, which is now booming, but it comes with higher costs and increased risk to the client, particularly when a lender is aggressive. The effect of the new rules is felt when borrowers are forced from Schedule A banks to equity lenders or a private lender;

it is an effect that is tremendously costly for the borrower. For example, in crude terms, the rate with an AAA lender might be approximately 3%, whereas an equity lender might charge 4.89% and a private lender 8%. For a client with a $500,000 mortgage and a 30-year amortization, that could mean the difference between a monthly mortgage

mortgage (albeit at a higher rate) when there is a problem with that mortgage. Qualifying a client at 200 basis points above the contract rate sets the bar very high and is onerous for many people, especially those on a fixed-rate contract for whom the mortgage payment is guaranteed not to budge. This qualification may bulldoze certain clients from Schedule A to equity or even private lending. When a millionaire can conceivably be forced from Schedule A into private lending, then we have a problem. The housing/banking market is a colossal engine that should only be fine-tuned after collaboration with the government, lenders and the public. Whatever is decided should be implemented gradually, with regular testing of the effect on the market. If multiple ideas are suggested and brought into play, the cumulative effect can overshoot the mark and cause problems. In addition, self-employed individuals represent a vital sector of the economy. Currently they are now being put through

“Whatever is decided should be implemented gradually, with regular testing of the effect on the market. If multiple ideas are suggested and brought into play, the cumulative effect can overshoot the mark and cause problems” payment of around $2,103 with an A lender, $2,635 with an equity lender or $3,333 with a private lender. Forcing Canadians to make higher payments further squeezes their cash flow, and as would-be homeowners cascade through the different echelons of lending, the parameters change. If forced from Schedule A to equity lending, a borrower would pay 25.3% more; if forced from Schedule A to a private lender, the borrower pays 58.5% more. The overall default risk rises, and borrowers could face more aggressive enforcement action if there is a late payment – a Schedule A lender reacts differently than a private lender who has the exact same

the mill to qualify for even an equity product. Many are forced to migrate to private lending at a much higher cost. When we make borrowing onerous for small business, we are hurting an important part of our economy. The housing/banking sector is vital for the security of our financial system. Considerable thought must be put into the cumulative effect of changes as a whole, rather than individually.

Graeme Moss is the founder of Verico Fair Mortgage Solutions, an award-winning brokerage based in Hamilton, Ontario.

Best in the Business