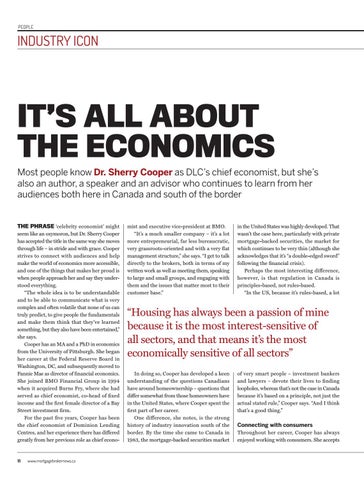 IT’S ALL ABOUT THE ECONOMICS Most people know Dr. Sherry Cooper as DLC’s chief economist, but she’s also an author, a speaker and an advisor who continues to learn from her audiences both here in Canada and south of the border

THE PHRASE ‘celebrity economist’ might seem like an oxymoron, but Dr. Sherry Cooper has accepted the title in the same way she moves through life – in stride and with grace. Cooper strives to connect with audiences and help make the world of economics more accessible, and one of the things that makes her proud is when people approach her and say they understood everything. “The whole idea is to be understandable and to be able to communicate what is very complex and often volatile that none of us can truly predict, to give people the fundamentals and make them think that they’ve learned something, but they also have been entertained,” she says. Cooper has an MA and a PhD in economics from the University of Pittsburgh. She began her career at the Federal Reserve Board in Washington, DC, and subsequently moved to Fannie Mae as director of financial economics. She joined BMO Financial Group in 1994 when it acquired Burns Fry, where she had served as chief economist, co-head of fixed income and the first female director of a Bay Street investment firm. For the past five years, Cooper has been the chief economist of Dominion Lending Centres, and her experience there has differed greatly from her previous role as chief econo-

mist and executive vice-president at BMO. “It’s a much smaller company – it’s a lot more entrepreneurial, far less bureaucratic, very grassroots-oriented and with a very flat management structure,” she says. “I get to talk directly to the brokers, both in terms of my written work as well as meeting them, speaking to large and small groups, and engaging with them and the issues that matter most to their customer base.”

in the United States was highly developed. That wasn’t the case here, particularly with private mortgage-backed securities, the market for which continues to be very thin (although she acknowledges that it’s “a double-edged sword” following the financial crisis). Perhaps the most interesting difference, however, is that regulation in Canada is principles-based, not rules-based. “In the US, because it’s rules-based, a lot

“Housing has always been a passion of mine because it is the most interest-sensitive of all sectors, and that means it’s the most economically sensitive of all sectors” In doing so, Cooper has developed a keen understanding of the questions Canadians have around homeownership – questions that differ somewhat from those homeowners have in the United States, where Cooper spent the first part of her career. One difference, she notes, is the strong history of industry innovation south of the border. By the time she came to Canada in 1983, the mortgage-backed securities market

of very smart people – investment bankers and lawyers – devote their lives to finding loopholes, whereas that’s not the case in Canada because it’s based on a principle, not just the actual stated rule,” Cooper says. “And I think that’s a good thing.”