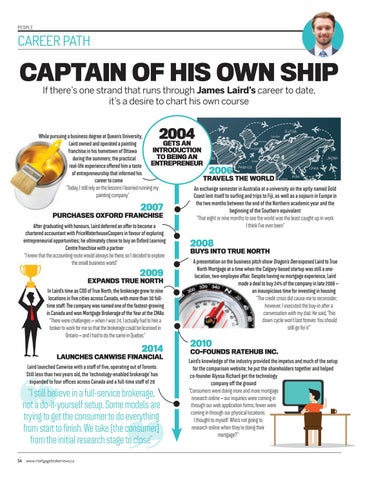 CAPTAIN OF HIS OWN SHIP If there’s one strand that runs through James Laird’s career to date, it’s a desire to chart his own course

While pursuing a business degree at Queen’s University, GETS AN Laird owned and operated a painting INTRODUCTION franchise in his hometown of Ottawa TO BEING AN during the summers; the practical ENTREPRENEUR real-life experience offered him a taste 2006 of entrepreneurship that informed his TRAVELS THE WORLD career to come “Today, I still rely on the lessons I learned running my An exchange semester in Australia at a university on the aptly named Gold painting company” Coast lent itself to surfing and trips to Fiji, as well as a sojourn in Europe in the two months between the end of the Northern academic year and the 2007 beginning of the Southern equivalent PURCHASES OXFORD FRANCHISE “That eight or nine months to see the world was the least caught up in work I think I’ve ever been” After graduating with honours, Laird deferred an offer to become a chartered accountant with PriceWaterhouseCoopers in favour of exploring entrepreneurial opportunities; he ultimately chose to buy an Oxford Learning 2008 Centre franchise with a partner BUYS INTO TRUE NORTH “I knew that the accounting route would always be there, so I decided to explore A presentation on the business pitch show Dragon’s Den exposed Laird to True the small business world” North Mortgage at a time when the Calgary-based startup was still a one2009 location, two-employee affair. Despite having no mortgage experience, Laird EXPANDS TRUE NORTH made a deal to buy 24% of the company in late 2008 – an inauspicious time for investing in housing In Laird’s time as COO of True North, the brokerage grew to nine “The credit crisis did cause me to reconsider; locations in five cities across Canada, with more than 30 fullhowever, I executed the buy-in after a time staff. The company was named one of the fastest-growing conversation with my dad. He said, ‘This in Canada and won Mortgage Brokerage of the Year at the CMAs down cycle won’t last forever. You should “There were challenges – when I was 24, I actually had to hire a still go for it’” broker to work for me so that the brokerage could be licensed in Ontario – and I had to do the same in Quebec”

LAUNCHES CANWISE FINANCIAL Laird launched Canwise with a staff of five, operating out of Toronto. Still less than two years old, the ‘technology-enabled brokerage’ has expanded to four offices across Canada and a full-time staff of 28

“I still believe in a full-service brokerage, not a do-it-yourself setup. Some models are trying to get the consumer to do everything from start to finish. We take [the consumer] from the initial research stage to close”

CO-FOUNDS RATEHUB INC. Laird’s knowledge of the industry provided the impetus and much of the setup for the comparison website; he put the shareholders together and helped co-founder Alyssa Richard get the technology company off the ground “Consumers were doing more and more mortgage research online – our inquiries were coming in through our web application forms; fewer were coming in through our physical locations. I thought to myself: Who’s not going to research online when they’re doing their mortgage?”