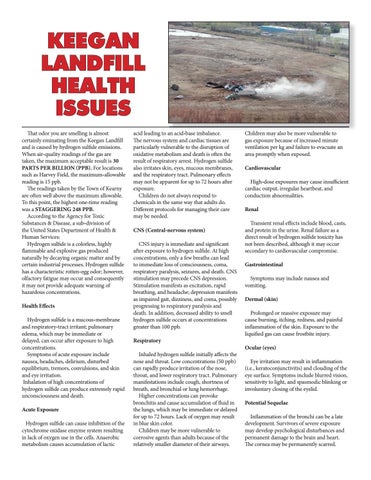 KEEGAN LANDFILL HEALTH ISSUES That odor you are smelling is almost certainly eminating from the Keegan Landfill and is caused by hydrogen sulfide emissions. When air-quality readings of the gas are taken, the maximum acceptable result is 30 PARTS PER BILLION (PPB). For locations such as Harvey Field, the maximum-allowable reading is 15 ppb. The readings taken by the Town of Kearny are often well above the maximum allowable. To this point, the highest one-time reading was a STAGGERING 248 PPB. According to the Agency for Toxic Substances &amp; Disease, a sub-division of the United States Department of Health &amp; Human Services: Hydrogen sulfide is a colorless, highly flammable and explosive gas produced naturally by decaying organic matter and by certain industrial processes. Hydrogen sulfide has a characteristic rotten-egg odor; however, olfactory fatigue may occur and consequently it may not provide adequate warning of hazardous concentrations. Health Effects Hydrogen sulfide is a mucous-membrane and respiratory-tract irritant; pulmonary edema, which may be immediate or delayed, can occur after exposure to high concentrations. Symptoms of acute exposure include nausea, headaches, delirium, disturbed equilibrium, tremors, convulsions, and skin and eye irritation. Inhalation of high concentrations of hydrogen sulfide can produce extremely rapid unconsciousness and death. Acute Exposure Hydrogen sulfide can cause inhibition of the cytochrome oxidase enzyme system resulting in lack of oxygen use in the cells. Anaerobic metabolism causes accumulation of lactic

acid leading to an acid-base imbalance. The nervous system and cardiac tissues are particularly vulnerable to the disruption of oxidative metabolism and death is often the result of respiratory arrest. Hydrogen sulfide also irritates skin, eyes, mucous membranes, and the respiratory tract. Pulmonary effects may not be apparent for up to 72 hours after exposure. Children do not always respond to chemicals in the same way that adults do. Different protocols for managing their care may be needed. CNS (Central-nervous system) CNS injury is immediate and significant after exposure to hydrogen sulfide. At high concentrations, only a few breaths can lead to immediate loss of consciousness, coma, respiratory paralysis, seizures, and death. CNS stimulation may precede CNS depression. Stimulation manifests as excitation, rapid breathing, and headache; depression manifests as impaired gait, dizziness, and coma, possibly progressing to respiratory paralysis and death. In addition, decreased ability to smell hydrogen sulfide occurs at concentrations greater than 100 ppb. Respiratory Inhaled hydrogen sulfide initially affects the nose and throat. Low concentrations (50 ppb) can rapidly produce irritation of the nose, throat, and lower respiratory tract. Pulmonary manifestations include cough, shortness of breath, and bronchial or lung hemorrhage. Higher concentrations can provoke bronchitis and cause accumulation of fluid in the lungs, which may be immediate or delayed for up to 72 hours. Lack of oxygen may result in blue skin color. Children may be more vulnerable to corrosive agents than adults because of the relatively smaller diameter of their airways.

Children may also be more vulnerable to gas exposure because of increased minute ventilation per kg and failure to evacuate an area promptly when exposed. Cardiovascular High-dose exposures may cause insufficient cardiac output, irregular heartbeat, and conduction abnormalities. Renal Transient renal effects include blood, casts, and protein in the urine. Renal failure as a direct result of hydrogen sulfide toxicity has not been described, although it may occur secondary to cardiovascular compromise. Gastrointestinal Symptoms may include nausea and vomiting. Dermal (skin) Prolonged or massive exposure may cause burning, itching, redness, and painful inflammation of the skin. Exposure to the liquified gas can cause frostbite injury. Ocular (eyes) Eye irritation may result in inflammation (i.e., keratoconjunctivitis) and clouding of the eye surface. Symptoms include blurred vision, sensitivity to light, and spasmodic blinking or involuntary closing of the eyelid. Potential Sequelae Inflammation of the bronchi can be a late development. Survivors of severe exposure may develop psychological disturbances and permanent damage to the brain and heart. The cornea may be permanently scarred. 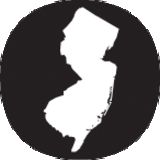