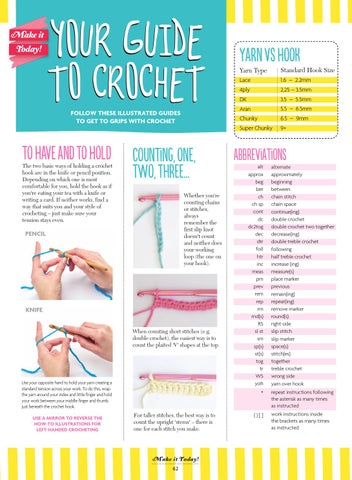 To have and to hold

The two basic ways of holding a crochet hook are in the knife or pencil position. Depending on which one is most comfortable for you, hold the hook as if you're eating your tea with a knife or writing a card. If neither works, find a way that suits you and your style of crocheting – just make sure your tension stays even.

Counting, one, two, three... Whether you're counting chains or stitches, always remember the first slip knot doesn't count and neither does your working loop (the one on your hook).

KNIFE When counting short stitches (e.g. double crochet), the easiest way is to count the plaited 'V' shapes at the top.

Use your opposite hand to hold your yarn creating a standard tension across your work. To do this, wrap the yarn around your index and little finger and hold your work between your middle finger and thumb, just beneath the crochet hook.

For taller stitches, the best way is to count the upright 'stems' – there is one for each stitch you make.

chain (ch) Before you learn any other crochet technique, youâ&#x20AC;&#x2122;ll need to master the chain stitch. When repeated, it forms your foundation chain

1 Make a slip knot and put it on the neck of the hook â&#x20AC;&#x201C; don't pull it too tight or it will be difficult to stitch with. Coming from behind, wrap the yarn around the hook from right to left, across the 'neck'.

1 Insert hook into second chain from the hook (or as indicated in the pattern you are using). Two loops on the hook.

2 Wrap yarn around hook and pull yarn through both loops. The loop on the hook does not count as a chain.

The magic ring is an easy way of beginning to work in the round. It is often used when making amigurumi toys

This is one of the main stitches in crochet. Once you've mastered it, the world really is your (crochet) oyster!

1 Make a large loop by putting the yarn tail behind the working yarn.

1 Insert hook through both strands of next stitch.

2 Catch the yarn and use the hook to pull it down through the slip knot. You have now made one chain (ch). Continue to make more chains, as directed in the pattern.

double crochet two together (dc2tog) The double crochet decrease appears in patterns as dc2tog, but the number can change according to how many stitches you are crocheting together

2 With your hook, draw the working yarn through the loop, so you have one loop on the hook.

3 Make three chain stitches (counts as first treble), work a treble into the loop, crocheting over the tail.

2 Yarn over hook, draw through all three loops. One loop on hook.

4 Continue to work as many stitches as needed into the loop. Once finished, untwist the tail if necessary and then pull to close the loop.

2 Yarn over hook and draw back through work. Two loops of yarn on hook.

3 Yarn over hook again and draw through both loops.

YOUR GUIDE TO CROCHET 63

Work through the stitch until the final step (leaving two loops on the hook). Wrap the new yarn around the hook and draw through the two loops. Continue to work in new yarn.

The half treble is very similar to the double crochet, except for the extra ‘yarn over hook’ (yoh) before each stitch is started.

1 (You will need a turning chain of two sts.) Yarn over hook and insert through stitch.

2 Yarn over hook and draw back through work. Three loops on hook.

3 Yarn over hook and draw through all three loops. 1 (You will need a turning chain of three stitches). Yarn over hook. Insert hook through stitch.

treble two together (tr2tog) This is similar to double crochet decrease, but with treble stitches – again, the number can change.

1 (You will need a chain of five stitches). Wrap yarn twice around hook, inserting hook through the stitch.

2 Yarn over hook and draw back through the work. Four loops on hook.

3 Yarn over hook and draw through first two loops. Two loops on hook.

For a selection of videos covering crochet techniques from the basic stitches to more advanced patterns including amigurumi and adding crochet edgings to your work, head over to our sister title’s website, letsknit.co.uk. bit.ly/LKTutorials 4 Yarn over hook and draw through all loops. One loop on hook.

1 With wrong side of work facing, create five incomplete stitches by leaving the last loop of each stitch on the crochet hook (six loops will remain). Yarn over hook,

draw through all six loops. 2 Yarn over hook, draw through loop on the hook. Push bobble through to the right side of the work.

We recommend that you wash your kit yarn by hand to keep it soft and prevent shrinkage. Why not try Soak, a no-rinse gentle fibre-care solution available in five subtle fragrances. 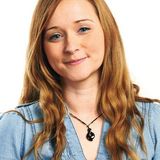 Copy and commissioned illustrations for Make it Today, Issue 2

Copy and commissioned illustrations for Make it Today, Issue 2