The Power of Believing in a Child - Annual Report September 2018 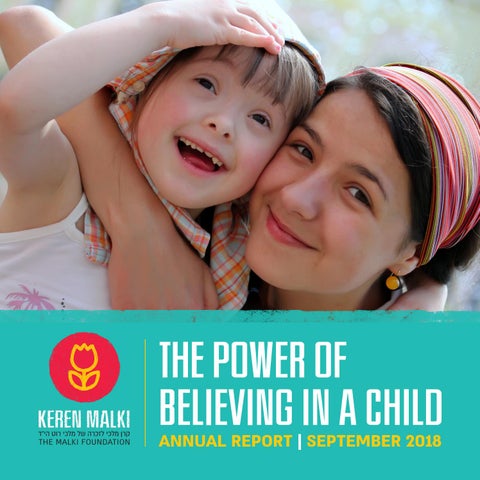 The power of believing in a child ANNUAL REPORT | SEPTEMBER 2018

Belief in a better future How often are parents of children with special needs told their child will not succeed – and through belief and hard work prove the experts wrong? The Torah shows how belief in ourselves can overcome challenges and other people’s opinions to attain greatness. Korach told Moshe that he was nothing special. Yosef’s brothers sold him into slavery to put a stop to his dreaming. David’s father did not think him good enough to present to the prophet Shmuel; his brothers scoffed at him for volunteering to fight Goliath. Though others tried to push them down, each of these individuals had the self-belief to fulfill his destiny and take leadership. So too with the parents of children with disabilities. They are too often told by ‘experts’ to expect little, sometimes nothing, from their child. That he or she will not amount to much so why bother. But parents who refuse to give up and who work with the therapists know they give the child a chance to achieve his or her potential. At the Malki Foundation, we believe in parents and their ability to bring about positive change in their child’s life. Like the Be’er Sheva mother who against expert advice knew her daughter Anna could understand what was said to her. She eventually found a speech therapist willing to work with her who has achieved astounding progress. Or Mendy’s parents who, with the physiotherapist, have seen him progress from a passive, static one year old to a child who runs. We stand with them in their efforts.

Please join us in celebrating these children’s achievements by reviewing our annual report and show your belief in the potential of these children and others like them. Wishing you a blessed New Year. ‫שנה טובה ומבורכת‬

When families are empowered, children are able to reach their greatest potential ANNUAL REPORT 2018

&quot;With Lisa and Keren Malki beside me, I feel empowered for the first time.&quot;

The power of a mother’s belief Tanya’s teenage daughter Anna has CP, epilepsy and quadriplegia. At Anna’s special education school, the speech therapist said she doesn’t understand and can’t communicate. A therapist sent by the government thinks the same, and so too the National Insurance (Bituach Leumi) assessment committee. No one knows Anna like Tanya does and she’s sure they are wrong. Immigrating from Russia as a pediatrician with a neo-natal intensive care specialty, Tanya first settled in Israel’s center but moved to Be’er Sheva, southern Israel, when an attractive job-offer came along. There, Anna’s new school wouldn’t give Anna the therapies to which she was entitled because other children “had more potential”. Tanya who always read stories and played music to Anna knew the child’s pleasure in these things was real. She was certain that Anna would benefit from exposure to Augmentative and Alternative Communication (AAC), a technology that makes up for missing skills. Tanya pressed for her daughter to be re-assessed. The officials kept telling her “no”. Undeterred, Tanya searched for an AAC-knowledgable therapist and met Lisa Scharf, a specialist member of the Malki Foundation’s Therapists on Wheels team. A dedicated and caring expert in her field, Lisa re-evaluated Anna and got to work. Partnering with an Occupational Therapist, Lisa is working to get Anna her own customized communication device that meets her undoubted capabilities and needs. Tanya stands for what the Malki Foundation knows to be true: a parent knows what’s best for her child. With the right kind of support, nothing is impossible. KEREN MALKI - THE MALKI FOUNDATION

Subsidizes the expense of paramedical therapeutic care selected by the childâ&amp;#x20AC;&amp;#x2122;s family.

Zlata Hersch Memorial Therapists on Wheels Sends paramedical therapists to children who are either house-bound, or live in Israelâ&amp;#x20AC;&amp;#x2122;s remote peripheral communities.

Belief in the Method

Alan Shapiro, originally from South Africa, is a physical therapist with 20 years experience. Trained as both a medical doctor and physical therapist, he decided to focus on therapy in order to specialize in the treatment of children with neuro-developmental delays. Alan’s expertise is MEDEK, a specialized form of physical therapy that encourages a challenging response from the child. Children getting this therapy often advance to sitting, standing and walking. Alan says MEDEK “achieves better quality of movement and sooner than would have otherwise been achieved“ via traditional physical therapy.​ Alan has been a greatly valued therapist in the Malki Foundation’s Therapies at Home program for seven years. One of the beneficiaries of his dedication is Mendy whose parents reached out to Alan and the Malki Foundation when he was 15 months old and still unable to sit unassisted, crawling only on his stomach and nowhere close to walking. Years of diligent therapy, hard work and determination changed that. “Mendy runs beautifully today”, we learned. He climbs stairs and enjoys playing with a ball. ​ lan says children with delayed motor skills can achieve dramatically better functional A skills if there is early detection, early intervention and brain-recovery potential: “Over the years, I have learned there is another issue which will push a child’s limits even further and that’s the family’s belief in the child’s ability. When a parent is enthusiastic and has faith in the child’s eventual success, this raises the bar and often brings results way beyond what the initial evaluation predicts”. We’re proud of Alan’s heart-warming commitment to working with children with disabilities which helps deliver significantly happier lives. KEREN MALKI - THE MALKI FOUNDATION

The Malki That You Could Have Become The Malki Foundation was founded to honor the memory of Malki Chana Roth z”l who, at the age of 15 years old, was tragically killed in a terrorist attack in central Jerusalem in 2001. A beautiful person inside and out, Malki was very close to her family, especially her sister Haya, who suffers from complex disabilities. Malki’s brother, Shaya, tells a story that highlights Malki’s thoughtfulness and closeness with her siblings: “The night before I went into the army to do my national service, which was a couple of days before you were killed, we went out for ice cream. All of a sudden, you walked off and came running back with a goodbye gift for me – a red laundry bag, some packaged cookies, and a pack of Pringles. You wrote in your diary that you were proud that I was going into a combat unit… I know you would have become a significant part of my life. For sure, I would have talked about things with you and sought your advice. I’m certain that everyone here, in their hearts, carries around the Malki that you could have become if you had remained with us.” Today, 17 years after her untimely death, the Malki Foundation continues Malki’s legacy of caring for others and loving her family. By supporting families who choose to care for their children with disabilities at home, we are giving them a life filled with the love and caring that only a family can provide.

&quot; I know you would have become a significant part of my life&quot;

The Power of Believing in a Child - Annual Report September 2018 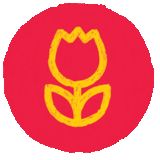