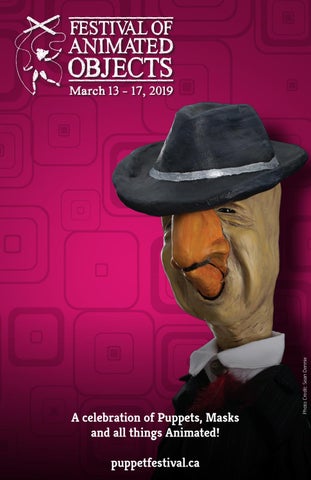 A celebration of Puppets, Masks and all things Animated! puppetfestival.ca

We Are Canadian: Family Screening National Film Board

Wapos Bay: There’s No I in Hockey

Clash Of The Titans

Designed and directed by The Old Trout Puppet Workshop

WELCOME It could be argued that puppetry is one of the purest forms of interdisciplinary performance as it combines almost every media of art: sculpture/painting/dance/ storytelling/music/theatre - place an equal sign at the end of this equation and you get a puppet show. This year we are bringing in work that adheres to this very formula, we are shuffling before you a great heap of art all rolled into the wonder of animated oration. We are reaching into the roots of our primal instinct to tell each other tales of life and what it means to be a human being struggling against the rigours of this fast-paced digital world. We do it not with computergenerated imagery but by using objects that represent things, moved by our hands and brought to life by your imagination, just like our ancient ancestors in old hovels heated by stick and coal and lighted by candles. Itâ&amp;#x20AC;&amp;#x2122;s old school. In some manner the orchestration of this festival is interdisciplinary as well, it is a gathering of different people all set to the same task, to bring the community together, to inspire great art in response to great art and in this way, to become ourselves great art. Just by being here you are adding to the efforts of the artists you watch, you have invested in living a creative life which is something that makes the world a better place. Nice work. Thank you for adding to the occasion, for making all the hard work done by that interdisciplinary team worth the time and sweat. Itâ&amp;#x20AC;&amp;#x2122;s great to be here with you.

THE GRAND MARCH 12–24, 2019 (various times) How do you become the 8th wonder of the world? GIANT is the amazing story of professional wrestler André the Giant, one of the most recognizable and beloved public figures ever. With a cast of five women, GIANT makes full use of the inherent theatricality of professional wrestling, bringing an audience ringside while they simultaneously discover the details of André’s giant-sized life. From the minds behind The Highest Step in the World, Tomorrow’s Child and The Last Voyage of Donald Crowhurst. GIANT is designed to engage both wrestling aficionados and those who only knew André as the beloved giant Fezzik in Rob Reiner’s classic film, The Princess Bride. CUSTOM BROKER

FRIDAY MARCH 15, 2019 - 8:00PM Hailing from France, she is a puppeteer, he is a musician, and together they present us with a complete metamorphosis of a life in a dynamic, delirious almost hallucinatory form. From birth to death, from childhood to love: make-believe, highwire, projections and fire - a large kaleidoscope swirls before an old women as her life is extinguishing. Taking place during the implacable reign of the three Fates, presiding over our destinies, the one who weaves the string of life, the one who unwinds it and the one who cuts it; three Fates, three destinies, Tria Fata.

By Alex and Olmsted SATURDAY MARCH 16, 2019 - 11:00AM SATURDAY MARCH 16, 2019 - 1:00PM Awarded a 2017 Jim Henson Foundation Grant, Milo the Magnificent is a humorous and engaging puppet show about an aspiring magician, Milo. Akin to the Sorcererâ&amp;#x20AC;&amp;#x2122;s apprentice, Milo, in an attempt to display his magical powers, discovers that magic has a way of taking on a life of its own. All the way from Washington DC, Alex Vernon and Sarah Olmsted Thomas use stunningly innovative puppetry to delight audiences of all ages. Also playing at Shane Homes YMCA at Rocky Ridge, and Brookfield Residential YMCA at Seton. Tickets and information at ymcacalgary.org/arts

SATURDAY MARCH 16, 2019 - 7:00PM Fall in love and bear witness to the life tragedies of Tzeng’s alter-ego Jo-Lee in these two delightfully disturbing performance hybrids of contemporary dance, clown and puppetry. “SHE and…he” by Jo-Lee SHE discovers and confronts her “Asian Mystique,” and he holds the world with Wonderbread existence. Pleasure and shame climax to transform Jo-Lee (and John’s) questionable reality in this coming of age performance that playfully explores exoticism, stereotypes and cultural expectations of being. “A Meditation on the End” by Jo-Lee With death in arms, then at her feet, Jo-Lee muses on what has given her life meaning. In this bare bones duet, Tzeng leaps into the fragmented memories of an imagined other, crafting a theatrical dance that embraces the poetry and humour of existential longing.

ENGINEERED AIR THEATRE, ARTS COMMONS SATURDAY MARCH 16, 2019 - 8:15PM In an age where gender can be fluid and sometimes confusing, how does one find their true gender identity? Well, throw yourself a gender reveal party of course! Through the lens of our favorite french clown, Pierrot’s Gender Reveal Party examines the gender binary through pink and blue explosions, shadow puppetry, and song. The binary has never been so fun!

Performed by real-life mother and daughter duo Susan and Randi, Dorothy is the true story of how three generations of women grapple with the lifelong implications of Alzheimer’s disease. Drawing from an actual journal documenting one family’s secret hopes and fears, this show reveals a daughter’s experience caring for her mother as she slowly slips away. Featuring verbatim text, found objects and shadow puppetry, this is a touching and uplifting new work by Vancouver’s Jessie Richardson of the Award winning Little Onion Puppet Co.

ALL AGES TICKETS AT puppetfestival.ca

SATURDAY MARCH 16, 2019 - 1:00PM A story of a simple structure in the heart of a community and what happens when one person decides that another is not worthy of the bench. This play explores ideas of what makes a true community by demonstrating how one bench can affect the lives of so many. A delightfully entertaining play that will make you smile as you reflect on societal values. The Bench made its debut at the OUF! Puppet Festival in Montreal in 2018 - proving that little shows can make a big impact.

HOW TO PUPPETEER ANYTHING 6:00PM

UNIMA CANADA WEST CHAPTER LAUNCH 9:30AM THE EMANCIPATED SPECTATOR 10:45AM

CO-PRODUCED WITH CAOS AND EMMEDIA CALGARY CENTRAL PUBLIC LIBRARY MEETING ROOM 14 SATURDAY MARCH 16, 2019 - 4:30PM Curated by Regina filmmaker Janine Windolph, this fascinating and entertaining program of stop-motion, puppetry, and animated shorts from around the world explores the human condition in relation with the land, the environment and space. (dark themes &amp; mature content)

What do polar bears, woolly mammoths, and homesick hedgehogs all have in common? The National Film Board (NFB), that’s what. Curated by festival founder Xstine Cook, this captivating selection of new and classic films uses puppetry, stop-motion, and other methods to entertain and amaze.

Wapos Bay is a Gemini Award-winning stop-motion animation series that follows the adventures of 3 kids from a Cree community in northern Saskatchewan. In this first episode Talon and his cousin T-Bear play on the same hockey team, but their relationship becomes strained when they both try to win the attention of a girl on an opposing team.

Check out our Puppet Pop-up at the festival wppuppet.com

An old school epic, Clash of the Titans follows Perseus (Harry Hamlin), son of the god Zeus (Laurence Olivier), after he falls in love with the lovely Princess Andromeda (Judi Bowker), and embarks on one dangerous quest after another. Perseus battles Medusa and the Kraken, classic stop-motion animation creatures who are the work of special effects legend and movie producer Ray Harryhausen.

GLOBE CINEMA SUNDAY MARCH 17, 2019 - 2:45PM PG13 | Tickets at puppetfestival.ca In celebration of The Dark Crystal: Age of Resistance coming soon to TV, check out Jim Henson and Frank Ozâ&amp;#x20AC;&amp;#x2122;s original masterpiece on the big screen. Jen, the last Gelfling survivor of his race, is set on a heroâ&amp;#x20AC;&amp;#x2122;s quest by the Mystics. Jen must find a shard of a powerful gem that once provided balance to the universe, and wrest it from the evil Skeksis. Warning: brilliant puppetry that some viewers may find terrifying.

HOW TO PUPPETEER ANYTHING

Warkentin’s one-woman puppet musical Mii Other Woman gives voice to dementia through the power of puppets. Warkentin leads this engaging workshop, and gives participants interested in creating a socially conscious puppet show an outline to support the process from concept to production. From testing ground to collaboration, you will leave with the tools to bring your own play to life.

CALGARY CENTRAL PUBLIC LIBRARY SATURDAY, MARCH 16, 2019: 12:30PM - 4:30PM WP Puppet Theatre &amp; Youth Central Volunteers Drop by the Questionarium on the second floor of the new central library and make your own flexible alien from sponge foam and bric-brac! Make a wiggly puppet friend and put on a show! We’ll help with fabrication but you have to bring your imagination!

Using natural and found materials, together with low- and hightech light sources, participants have fun exploring and creating collaborative micro stories. Based on our experiences in the Loris Malaguzzi International Centre ateliers, on study tours to Reggio Emilia, Italy, our goal is to encourage educators to use technology in rich and meaningful ways, and to provide children with another language for expression and communication.

In puppet theatre and in greater society, the role of the audience is changing. Productions challenge the division between actors and onlookers; participation both offline and online is the norm. Public and private is blurred; creativity is claimed for everyone. The maker movement explodes, indie art is mainstream, and citizens demand control of their own destinies. Join us for a lively discussion on universality and audience expectations and roles.

WĂ&amp;#x153;NDER-BRIEFS A Festival within a Festival Co-produced by Canadian Academy of Mask and Puppetry Anywhere and Everywhere A collection of short puppet works and activities found around the Festival of Animated Objects, open and free to all. Look out for cutting-edge artists appearing and performing their wonders in unexpected places. Search out creations by artists Kyle Hinton, Andrew Cooper, Jennifer LeBlanc, Sherron Burns &amp; Natalie LabossiĂ¨re. Try your hand at stop-motion animation, guided by local animators The Bum Family ...and so much more!

OPENING RECEPTION: SATURDAY MARCH 9, 2019 10AM Free. All day, Everyday Our Window the mural was created by AJA Louden with participants of the City of Calgary’s Street Art Program for Youth (2018). Download Our Window the app, a custom-made augmented reality (AR) app by Matthew Waddell &amp; Laura Anzola. Point your phone camera at the mural, and watch the panels come to life with animations created by Jarett Sitter (digital) and The Bum Family (stop-motion).

The natural and the digital collide in colorful needleworks of landscapes created by both hand and machine. Thompson’s “embroidermation” combines embroidery and animation in a dynamic process, creating looping, revolving landscapes with a nod towards the history of the panoramic vista.

CITIZEN PUPPET EXHIBITION Puppets here! Puppets there! Puppets, puppets everywhere! Citizen puppet is a walking exhibition celebrating a range of contemporary local mask and puppetry artists with a hint of the past. From the library to the theatre, alone or en masse, you can chance upon these magical creations in the most unsuspecting places. Check puppetfestival.ca for details

Designed and directed by The Old Trout Puppet Workshop

From everyone at the Festival of Animated Objects Thank you to our amazing volunteers! 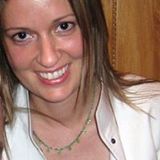