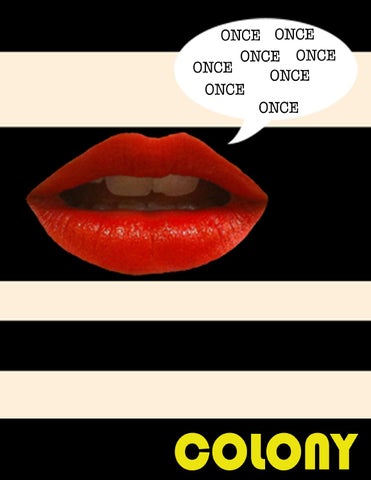 COLONY “It comes from another planet. It's like staring into the spinning blade of a chainsaw until you scare yourself wondering what it would be like to touch it. Was it conceived by hornets or humans? One thing is for sure. When you arrive, it will be waiting for you. It has always been waiting for you…” —Scott Sheppard, Artistic Director Groundswell Theatre Company

Mesmerizing and hypnotic. Mechanical and incessant. Colony considers both the human and the herd. Through a concentrated and athletic commitment to uniformity, the work is a choreographic investigation of repetition, duration and synchronization where differing states of awareness and being emerge. Implicating the audience as critical to the creation of the performative event, this intense meditation disorients our experience of seeing and being seen in a shared space. Distance, proximity, power and vulnerability are at play while your role as watcher is balanced by the tension of being watched. Colony, created and performed by Kelly Bond and Melissa Krodman, is a bassdriven exercise in calculation, compulsion and connection.

More on COLONY In a society in which perfection is upheld as possible and ideal, uniformity is a pervasive system of value. Sameness provides a framework of familiarity and any variation denotes “error,” provoking attention as something to be castigated. Humans have keen eyes for the tiniest difference in all things predicated as uniform, as if by identifying difference, we can quash potential threats to our systems of belief. Perhaps the tension that arises through “error” propels us headfirst into our own feelings and fears of individuality versus the encompassing capacity of herd mentality, forcing recognition of questions of personal identity and belonging. Investigation of these questions through live performance generates the necessity for real-time confrontation with arising feelings and thoughts. Colony highlights societal functioning through performative and choreographic investigations of tension in duration, repetition, and synchronization. Colony is an experimental dance duet that considers both the human and the herd through continually recreating the critical moment when potentially catastrophic tension gives way. Upon entry to the space, individuals, rather than the audience as a group, are confronted by the performers’ mechanically persistent movements, forcing an immediate re-examination of expectations of distance and proximity, power and vulnerability, and ways of seeing and being in a shared space. Through incessant repetition and contrasting stillness, differences in the performers’ bodies, movements, and states of being emerge. While the dancers aim for perfect synchronization, inevitably moments of “error” occur, and these vacillations between “perfection” and “imperfection” add layers of tension and complexity to the piece. The subtle discrepancies in the dance become the focus. Recognizing that our works present different physical, mental, and emotional demands from those of modern and postmodern approaches to dance, we are witnesses to the need for an experiential approach to the work on both the parts of the spectators and the performers. Inherent to Colony and its development process is research on choreography of the spectator, highlighting their role as an essential part of the performative transfer. Audience members are asked to engage with the work outside of the established metronome and spatial parameters of traditional theatre, assuming their own choices for mobility and recognizing that their action or inaction, engagement or disengagement, is visible within the space and becomes a part of the others’ experiences of the work. This work and the discourse that surrounds it serve as a catalyst for reflection on tensions between inclusion and exclusion within shared spaces, driving questions of society and individuality, conformity and resistance, desire and repression.

Kelly Bond is a choreographer and performing artist whose most recent works include Colony (2012) in collaboration with Melissa Krodman, Elephant (2010), Splitting the Difference (2009), and Franko B killed me or An exercise in self-control (2007). She holds an MA in European dance-theatre practice from Laban in London which she attended as a Jack Kent Cooke Graduate Scholar. She also earned a BFA in dance performance and choreography and a BA in English from The University of Southern Mississippi. Kelly was an artist with Dance/Metro DCâ&#x20AC;&#x2122;s 2010 pilot program, Forward Five, and a 2009 Young Emerging Artist of the DC Commission on the Arts & Humanities. She has been most inspired by her work with the artists of 6MONTHS1LOCATION/ ex.e.r.ce08 under the artistic direction of Xavier Le Roy at the Centre ChorĂŠgraphique National de Montpellier. She has served as an adjunct professor of dance at The George Washington University and University of Maryland, Balti -more County. She lives with her partner and daughter in Nashville, TN.

Melissa Krodman is a Philadelphia -based deviser and performer of original, experimental theatre and dance. Original works include The Sincerity Project with Team Sunshine Performance Corporation (in progress, 2014), Colony with Kelly Bond (2012), Vainglorious with Applied Mechanics (2012), Elephant with Kelly Bond (2010), and Handbook for Hosts with Happenstance Theatre and banished? Productions (2010). Melissa is a graduate of the 20112013 class of the Pig Iron School for Advanced Performance Training in Philadelphia where she studied ensemble devising, movement, primitive voice, and improvisation. She recently co-founded the Sawyer Farm Artistic Residency in Worthington, MA, focused on sustainable food cultivation and laboratory-like research and development in the experimental performing arts. She holds a BS in Film & Television Production from Boston University.

“so visceral and surprising… and physically impressive that it’ll make you feel something.”

COLONY Press “Bond and Krodman are highly disciplined performers, athletes with finely tuned senses of drama and play. Colony is an abstract piece ripe for interpretation and projection. However ambiguous and enigmatic it may appear, it's built around a fascinating dramatic arc and structure, and a score that brilliantly weaves in and out of pummeling rhythms to abstract electronics, from pop- song fragments to simply the sound of the breath....[I]tʼs as simple as it is disarming…” —DCist “I felt taken care of: I never yearned for meaning or interpretation and, instead, basked in the artfulness of Colony’s construction and execution. “ —thINKingDANCE “It is mesmerizing and oddly hypnotic, if not a little unsettling....The performers weave a sort of energy between themselves, as if they are connected by a series of vibrating strings through which they might be communicating. It feels as though they are holding themselves in trance, and soon enough, feels as though weʼve been taken in as well....You are a piece of the play, caught in a thick humming molasses that fills the space for 50 melodic minutes…” —DC Theatre Scene “...this performance-art piece manages to mesmerize through the hypnotic power generated by one’s need to perceive and focus in on the tiniest details...If you blink, you really may miss something. “ —Philadelphia City Paper

“Colony is part of an international conversation concerning contemporary performance....engaging in themes and concepts that drive innovative artistic processes.” —The Pinkline Project “The power of performance in Colony doesn’t come from showy, complicated choreography, but from quiet precision….Colony definitely rewards those willing to give themselves over to the strangeness, the quiet, and the intimacy.” —Southern Glossary

Technical rider, workshop information, and video of the full work is available upon request.