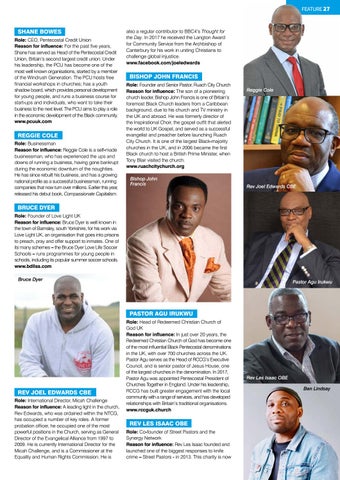 SHANE BOWES Role: CEO, Pentecostal Credit Union Reason for influence: For the past five years, Shane has served as Head of the Pentecostal Credit Union, Britain’s second largest credit union. Under his leadership, the PCU has become one of the most well known organisations, started by a member of the Windrush Generation. The PCU hosts free financial workshops in churches; has a youth shadow board, which provides personal development for young people, and runs a business course for start-ups and individuals, who want to take their business to the next level. The PCU aims to play a role in the economic development of the Black community. www.pcuuk.com

REGGIE COLE Role: Businessman Reason for influence: Reggie Cole is a self-made businessman, who has experienced the ups and downs of running a business, having gone bankrupt during the economic downturn of the noughties. He has since rebuilt his business, and has a growing national profile as a successful businessman, running companies that now turn over millions. Earlier this year, released his debut book, Compassionate Capitalism.

also a regular contributor to BBC4’s Thought for the Day. In 2017 he received the Langton Award for Community Service from the Archbishop of Canterbury for his work in uniting Christians to challenge global injustice. www.facebook.com/joeledwards

BISHOP JOHN FRANCIS Role: Founder and Senior Pastor, Ruach City Church Reason for influence: The son of a pioneering church leader, Bishop John Francis is one of Britain’s foremost Black Church leaders from a Caribbean background, due to his church and TV ministry in the UK and abroad. He was formerly director of the Inspirational Choir, the gospel outfit that alerted the world to UK Gospel, and served as a successful evangelist and preacher before launching Ruach City Church. It is one of the largest Black-majority churches in the UK, and in 2006 became the first Black church to host a British Prime Minister, when Tony Blair visited the church. www.ruachcitychurch.org Bishop John Francis

BRUCE DYER Role: Founder of Love Light UK Reason for influence: Bruce Dyer is well known in the town of Barnsley, south Yorkshire, for his work via Love Light UK, an organisation that goes into prisons to preach, pray and offer support to inmates. One of its many schemes – the Bruce Dyer Love Life Soccer Schools – runs programmes for young people in schools, including its popular summer soccer schools. www.bdllss.com Bruce Dyer

REV JOEL EDWARDS CBE Role: International Director, Micah Challenge Reason for influence: A leading light in the church, Rev Edwards, who was ordained within the NTCG, has occupied a number of key roles. A former probation officer, he occupied one of the most powerful positions in the Church, serving as General Director of the Evangelical Alliance from 1997 to 2009. He is currently International Director for the Micah Challenge, and is a Commissioner at the Equality and Human Rights Commission. He is

Role: Head of Redeemed Christian Church of God UK Reason for influence: In just over 20 years, the Redeemed Christian Church of God has become one of the most influential Black Pentecostal denominations in the UK, with over 700 churches across the UK. Pastor Agu serves as the Head of RCCG’s Executive Council, and is senior pastor of Jesus House, one of the largest churches in the denomination. In 2017, Pastor Agu was appointed Pentecostal President of Churches Together in England. Under his leadership, RCCG has built greater engagement with the local community with a range of services, and has developed relationships with Britain’s traditional organisations. www.rccguk.church

REV LES ISAAC OBE Role: Co-founder of Street Pastors and the Synergy Network Reason for influence: Rev Les Isaac founded and launched one of the biggest responses to knife crime – Street Pastors - in 2013. This charity is now 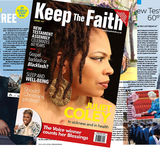