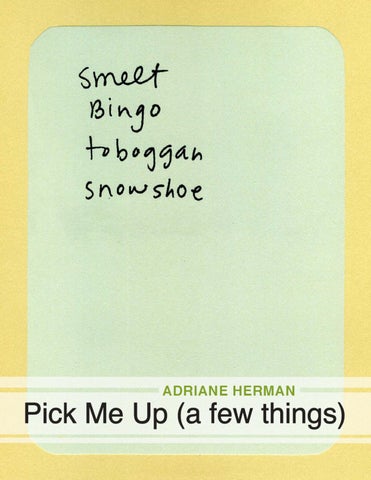 Pick Me Up (a few things) January 23 – March 6, 2011 Evidence of a life lived through letters What does your grocery list reveal about you? Which tasks are likely to remain on your “to-do” list and what might they say about your intentions? Are the mundane details of our lives worthy subjects for art? These are just some of the questions one may ask through artist Adriane Herman’s latest work. Well versed in the methodology of traditional printmaking and its formal techniques and processes, Herman takes us beyond the historical perspective of serial printing for the masses to make her work with and about the masses. Herman pays homage to the ephemera of the everyday by inviting the public to contribute to her Wall of Intention, a growing repository of anonymously discarded, found, donated, and bartered hand-written lists. Herman’s collection encompasses numerous thought processes from “honey do” lists, recipes, diagrams, and doodles to more intimate documentation of aspirations, goals, and challenges. These little slices of life may actually represent some of our best and worst (unseen) moments of self-fulfillment as they reveal our invisible attempts to pay the bills, finish chores, go shopping, organize our lives, and strive to do and be more than we often feel capable. In this age of facebook © and twitter ©, Herman’s Wall of Intention becomes a forum

Image above: Adriane Herman with Village Shalom resident Janet Shaw in preparation for her exhibition at Epsten Gallery, 2010. (Courtesy KCJMCA.)

of social networking writ longhand, depicting a collective identity that simultaneously shares intimate aspects of our lives. Participating in Herman’s project with the donation of a hand-written list is actually just the beginning of her artistic process. At once voyeuristic and poignant, this collection also serves as a visual library from which the artist creates a diverse range of work such as vinyl decals, graphite rubbings, transfer prints, photo etchings, screen prints, and inlaid burnishing-clay tablets. Each of these methods serves the artist’s intent differently, while imbuing these lists with a gravity of consideration and focus that is typically reserved for much loftier subjects. Although transfer prints and burnishing clay may seem divergent, if not obscure, Herman’s ideas spread deeply into the public’s consciousness through these specific delivery systems precisely due to their mix of accessibility and eccentricity. Herman gets her messages to the people because they are, ultimately, messages from the people. It is also through this refraction of the conversation that she manages to establish a bridge between our lives and what is too often compartmentalized as Art. One way Herman achieves this is through the creation of temporary vinyl decals that the artist places within the public realm, on the windows and doors of retail stores, libraries, coffee shops, and other locations. In this context,

the lists become ironic signage broadcasting the humblest of messages to a pop-up audience. To further engage the public, Herman invites anyone with a piece of paper and graphite to generate rubbings from these decals and thus create their own free, editioned work of art. Herman also transforms some of her lists into transfer prints, that serve as a form of currency for the artist to barter away in exchange for lists. The recipient of the transfer print then becomes a messenger of the artist’s concept, further expanding the project’s audience. In addition to these at-large efforts, a significant foundation of Herman’s work is designed to engage the realm of the museum/gallery. In this environment, Herman’s objects become re-contextualized in a manner that opens them up to further investigation as art objects, while also opening a door for the public to engage the space as something beyond a visitor — as a collaborator. Evidence of this may be seen in Herman’s transformation of lists into prints that possess a trompe l’oeil appearance. In Sticky Situations, we may see a suite of prints that adhere directly to the gallery as giant Post-It Notes ©, while the artist’s latest series of intaglio prints are a one-to-one scale simulation of notes that appear to be written on various papers. Hanging framed and behind glass, these prints invite the viewer to consider them as rarefied artifacts, suggesting the need for a reevaluation of these simple and often marginalized yet immensely necessary human endeavors. The mark of a written or crossed-out word becomes evidence of life being lived, moment-by-moment, letter-by-letter, line-by-line.

Herman further sharpens our focus on certain lists by engaging in a labor-intensive process of enlarging and redrawing them in a matrix of inlayed, sanded, and polished burnishing clay applied to wood panels. The resultant clay tablets transform these lists into evocative monuments that possess a reflective sheen, allowing us to see ourselves within their silken red and black oxide surfaces. In Herman’s hands, these monuments are a manifestation of our best intentions for self-improvement, our procrastinations and accomplishments, our desires, our flights of imagination, and our attempts to retain a sense of order within an oftenhectic daily life. As she brings her art from the museum to the street and back again, Herman leads us between these spaces with fresh eyes and a new sense of purpose. Her lists serve as literary projections of our thoughts that become portraits of contemplation, intention, and action, compelling the viewer to see meaningfulness in acts that might otherwise remain unnoticed. In the process, Herman also does what artists often do best — she makes all of life more extraordinary. — Marcus Cain, Curator

Established in 1991 and celebrating its 20th anniversary in 2011, the Kansas City Jewish Museum of Contemporary Art (KCJMCA) provides innovative art exhibitions and related programming that engage seniors and diverse audiences from all segments of our community to enrich lives and celebrate our common humanity through art. KCJMCA realizes this goal through a cooperative partnership with Village Shalom, an assisted living facility that houses KCJMCA’s Epsten Gallery and through partnerships with local, regional, and national institutions that participate in KCJMCA’s Museum Without Walls exhibition program.

Adriane Herman wishes to thank residents and staff of Village Shalom and other members of the Kansas City community for donating lists to this ongoing project. Special thanks to Marcus Cain, Eileen Garry, Beniah Leuschke, Eileen Miller, Abby Rufkahr, E.G. Schempf, the board of the Kansas City Jewish Museum of Contemporary Art, and all others who support this remarkable integrated exhibition space. Gratitude goes to John O’Brien for the artist’s first jar of burnishing clay, and to Mo Dickens, Cary Esser, Seth Johnson, Hugh Merrill, Raechell Smith, May Tveit, and the Charlotte Street Foundation. Supplemental shouts out to Kelly Jackson, Bruce Brown, Lauren Fensterstock, Damir Porobic, Tim Young, Iris Busch, Brian Reeves and The National Endowment for the Arts (via the Maine Arts Commission) for their support of “Checking It Twice,” a project that yielded the treasure trove of lists that led to this work, which Western Exhibitions handles with care. This program is presented in part by the Kansas Arts Commission, a state agency, and the National Endowment for the Arts, a federal agency, which believes a great nation deserves great art. KCJMCA also wishes to thank the Jewish Community Foundation of Greater Kansas City, Jewish Federation of Greater Kansas City, Jewish Heritage Foundation of Greater Kansas City, Bank of America, H&R Block, Francis Family Foundation, the Lighton Foundation, UrbanSuburban Patrons and Artists, members of the Friends of KCJMCA, and Village Shalom for their ongoing support of our programs. Front cover image: Adriane Herman, Smelt, bingo, toboggan, snowshoe, 2010, photo etching with surface roll, ed. 1 of 44, 14 x 11”. (Courtesy the artist and Western Exhibitions.)

DONATE | CONTRIBUTE | JOIN KCJMCA is a non-for-profit 501(c)3 and a member of the national Council of American Jewish Museums. Contributions to KCJMCA are tax deductible. Adriane Herman: Pick Me Up (a few things)

Adriane Herman: Pick Me Up (a few things)