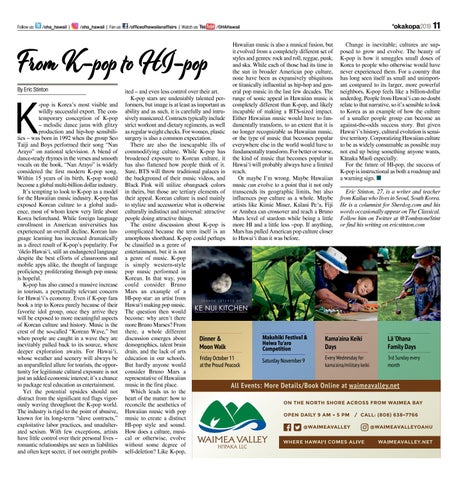 From K-pop to HI-pop By Eric Stinton

-pop is Korea’s most visible and wildly successful export. The contemporary conception of K-pop – melodic dance jams with glitzy production and hip-hop sensibilities – was born in 1992 when the group Seo Taiji and Boys performed their song “Nan Arayo” on national television. A blend of dance-ready rhymes in the verses and smooth vocals on the hook, “Nan Arayo” is widely considered the first modern K-pop song. Within 15 years of its birth, K-pop would become a global multi-billion dollar industry. It’s tempting to look to K-pop as a model for the Hawaiian music industry. K-pop has exposed Korean culture to a global audience, most of whom knew very little about Korea beforehand. While foreign language enrollment in American universities has experienced an overall decline, Korean language learning has increased dramatically as a direct result of K-pop’s popularity. For ‘ölelo Hawai‘i, still an endangered language despite the best efforts of classrooms and mobile apps alike, the thought of language proficiency proliferating through pop music is hopeful. K-pop has also caused a massive increase in tourism, a perpetually relevant concern for Hawai‘i’s economy. Even if K-pop fans book a trip to Korea purely because of their favorite idol group, once they arrive they will be exposed to more meaningful aspects of Korean culture and history. Music is the crest of the so-called “Korean Wave,” but when people are caught in a wave they are inevitably pulled back to its source, where deeper exploration awaits. For Hawai‘i, whose weather and scenery will always be an unparalleled allure for tourists, the opportunity for legitimate cultural exposure is not just an added economic interest; it’s a chance to package real education as entertainment. Yet the potential upsides should not distract from the significant red flags vigorously waving throughout the K-pop world. The industry is rigid to the point of abusive, known for its long-term “slave contracts,” exploitative labor practices, and unadulterated sexism. With few exceptions, artists have little control over their personal lives – romantic relationships are seen as liabilities and often kept secret, if not outright prohib-

ited – and even less control over their art. K-pop stars are undeniably talented performers, but image is at least as important as ability and as such, it is carefully and intrusively manicured. Contracts typically include strict workout and dietary regiments, as well as regular weight checks. For women, plastic surgery is also a common expectation. There are also the inescapable ills of commodifying culture. While K-pop has broadened exposure to Korean culture, it has also flattened how people think of it. Sure, BTS will throw traditional palaces in the background of their music videos, and Black Pink will utilize obangsaek colors in theirs, but those are tertiary elements of their appeal. Korean culture is used mainly to stylize and accessorize what is otherwise culturally indistinct and universal: attractive people doing attractive things. The entire discussion about K-pop is complicated because the term itself is an amorphous shorthand. K-pop could perhaps be classified as a genre of entertainment, but it is not a genre of music. K-pop is simply western-style pop music performed in Korean. In that way, you could consider Bruno Mars an example of a HI-pop star: an artist from Hawai‘i making pop music. The question then would become: why aren’t there more Bruno Marses? From there, a whole different discussion emerges about demographics, talent brain drain, and the lack of arts education in our schools. But hardly anyone would consider Bruno Mars a representative of Hawaiian music in the first place. Which leads us to the heart of the matter: how to reconcile the aesthetics of Hawaiian music with pop music to create a distinct HI-pop style and sound. How does a culture, musical or otherwise, evolve without some degree of self-deletion? Like K-pop,

Hawaiian music is also a musical fusion, but it evolved from a completely different set of styles and genres: rock and roll, reggae, punk, and ska. While each of those had its time in the sun in broader American pop culture, none have been as expansively ubiquitous or titanically influential as hip-hop and general pop music in the last few decades. The range of sonic appeal in Hawaiian music is completely different than K-pop, and likely incapable of making a BTS-sized impact. Either Hawaiian music would have to fundamentally transform, to an extent that it is no longer recognizable as Hawaiian music, or the type of music that becomes popular everywhere else in the world would have to fundamentally transform. For better or worse, the kind of music that becomes popular in Hawai‘i will probably always have a limited reach. Or maybe I’m wrong. Maybe Hawaiian music can evolve to a point that it not only transcends its geographic limits, but also influences pop culture as a whole. Maybe artists like Kimie Miner, Kalani Pe‘a, Fiji or Anuhea can crossover and reach a Bruno Mars level of stardom while being a little more HI and a little less –pop. If anything, Mars has pulled American pop culture closer to Hawai‘i than it was before.

Change is inevitable; cultures are supposed to grow and evolve. The beauty of K-pop is how it smuggles small doses of Korea to people who otherwise would have never experienced them. For a country that has long seen itself as small and unimportant compared to its larger, more powerful neighbors, K-pop feels like a billion-dollar underdog. People from Hawai‘i can no doubt relate to that narrative, so it’s sensible to look to Korea as an example of how the culture of a smaller people group can become an against-the-odds success story. But given Hawai‘i’s history, cultural evolution is sensitive territory. Corporatizing Hawaiian culture to be as widely consumable as possible may not end up being something anyone wants, Känaka Maoli especially. For the future of HI-pop, the success of K-pop is instructional as both a roadmap and a warning sign.  Eric Stinton, 27, is a writer and teacher from Kailua who lives in Seoul, South Korea. He is a columnist for Sherdog.com and his words occasionally appear on The Classical. Follow him on Twitter at @TombstoneStint or find his writing on ericstinton.com

The echo of our song carries us forward

The echo of our song carries us forward