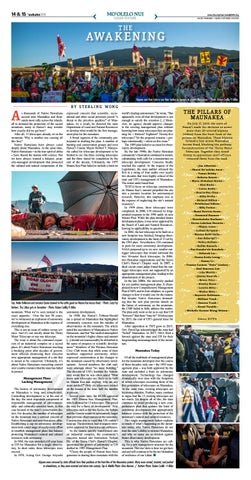 Küpuna and their kako‘o use their bodies as barriers to protect Maunakea. - Photo: Ruben Carillo/4 Miles

B y S t e r l i n g Wo n g s thousands of Native Hawaiians ascend onto Maunakea and thousands more rally across the islands, all to demand the protection of the sacred mountain, many in Hawai‘i may wonder how exactly did we get here? After all, 13 telescopes already sit on the mountain. Why is another one causing all this fuss? Native Hawaiians have always cared deeply about Maunakea. At the same time, Native Hawaiians – in the true spirit of aloha – have shared the mauna with science. But we have always wanted a balance: properly-managed development that protected the cultural and natural components of the

expressed concern that scientific, recreational and other social pressures posed “a threat to the priceless qualities” of Maunakea. As a result, he directed the state Department of Land and Natural Resources to develop what would be the first management plan for the mountain. A broad segment of the community participated in drafting the plan. A number of hunting and conservation groups and even Hawai‘i County Mayor Herbert T. Matayoshi called for telescope development to be limited to six: the three existing telescopes and the three slated for completion by the end of the decade. Ultimately, the 1977 Mauna Kea Plan failed to include a limit on

Top: Malia Hulleman and Jamaica Osorio chained to the cattle guard on Mauna Kea Access Road. - Photo: Cody Fay Bottom: The Lähui gets in formation - Photo: Ruben Carillo/4 Miles mountain. What we’ve seen instead is the astronomy development. exact opposite. Over the last 50 years, In 1980, the Hawai‘i Tribune-Herald we’ve witnessed an explosion of astronomy ran a spread on Maunakea that highlighted development on Maunakea at the expense of community concerns over the number of everything else. observatories on the mountain. The article This is not an issue of culture versus sci- noted the sacredness of Maunakea to Native ence. And it’s not strictly about the Thirty Hawaiians, and that “the rarified atmosphere Meter Telescope or any one telescope. on the mountain’s higher slopes and summit The issue is about the continued expan- [...] should not unreasonably be disturbed in sion of an industrial complex on a sacred the name of progress or scientific developplace. It’s about Native Hawaiians reaching ment.” Members of the Waimea Hawaiian a breaking point after decades of govern- Civic Club wrote that while some of their ment officials dismissing their concerns members supported astronomy, others over appropriate management of a site that expressed consternation at the changes to is meant to be conserved. Ultimately, it’s the mountain caused by observatory develabout Native Hawaiians reasserting control opment. Several members, the club said, over a native resource that the state has failed were adamant about “no more building.” to protect. The director of UH’s Institute for Astronomy wrote that he was often asked “How Management Plans many new telescopes are likely to be built Lacking Management on Mauna Kea and, anyway, why are any more needed?” Only six telescopes existed The history of astronomy development on the mauna at the time, half the number on Maunakea is long and complicated. at present. Controlling development is, at the end of Several years later, the BLNR approved the day, the most important component of the 1985 Mauna Kea Management Plan, responsible management of environmen- which allowed for 13 telescopes. This paved tally- and culturally-sensitive lands, in this the way for a flurry of development. New case located in the state’s conservation dis- telescopes such as the two Kecks, the Subaru trict. For decades, the number of telescopes and the Gemini would be substantially larger on the mountain was a seminal concern of than previous observatories on the mountain. Native Hawaiians and non-Hawaiians alike. Construction was so rapid that UH couldn’t Establishing a cap on astronomy develop- keep up. The university had to request retroment took center stage of nearly every effort active approval for four telescope subleases. to establish management plans that balance As the mauna quickly transformed into protecting Maunakea’s natural and cultural an industrial complex, the community’s resources with astronomy. concerns turned into frustration. Nelson In 1968, the state awarded a 65-year lease Ho, of the Sierra Club’s Hawai‘i Chapter, to UH for Maunakea for a single observa- questioned the growth of astronomy as UH tory. In short order, three telescopes were drafted its 1995 Management Plan. erected. “Cleary the people of Hawaii have been In 1974, Acting Gov. George Ariyoshi generous in sharing their mountain with the

world’s leading astronomers,” he wrote. “But apparently even all that development is not enough to satisfy the scientists [...] Moreover, no agency should approve changes to the existing management plan without knowing how many telescopes they are planning for – thirteen? Eighteen? Twenty-five telescopes? Yet the proposal remains – perhaps intentionally – silent on this issue.” The 1995 plan failed to account for observatory development. By the late 1990s, the Native Hawaiian community’s frustration continued to mount, culminating with calls for a moratorium on telescope development. Concerns finally reached the capitol. At the request of the Legislature, the state auditor released the first in a string of four audits over nearly two decades that were highly critical of the state and UH’s management of Maunakea. The initial audit found that: &quot;[UH’s] focus on telescope construction on Mauna Kea’s summit propelled the site into a premier location for astronomical research. However, this emphasis was at the expense of neglecting the site’s natural resources&quot;. In 1999 alone, three telescopes were completed. In 2000, UH released its longawaited response to the 1998 audit: its new Master Plan. While the plan detailed future development plans, it was never approved by the Board of Land and Natural Resources, leaving its applicability in question. In 2002, the last telescope to be built on a new footprint was finished, bringing observatory development to the limit of 13 set by the 1985 plan. Nevertheless, UH continued to push for more astronomy development. NASA proposed up to six new, smaller outrigger telescopes that would surround the two 10-meter Keck telescopes. In 2004, two Hawaiian organizations and the Sierra Club’s Hawai‘i Chapter sued. In 2007, a third circuit court judge found that the outrigger telescopes were not supported by an appropriate management plan, leading to the abandonment of the project. In the late 2000s, the university pushed for yet another management plan. It championed its new Comprehensive Management Plan (CMP), and its four subplans, as a game changer in how it would care for the mauna. But despite Native Hawaiians demanding that the new plan provide details on the future of astronomy on the mountain, the CMP failed to fully address the matter. The plan only went so far as to say that UH “foresees” that there “may be” 10 telescopes by 2033, the end of UH’s general lease for Maunakea. After opposition to TMT grew in 2015, Gov. David Ige acknowledged the state had “failed” Maunakea. In 2017, OHA filed a lawsuit against the state and UH for their longstanding mismanagement of the mountain. Maunakea Today Of all the multitude of management plans for the mountain developed over the course of three decades, only one – the 1985 management plan – was both approved by the state and included a limit on astronomy development. Technology has changed dramatically over time with the footprints of newer telescopes exceeding those of the first generation of telescopes on Maunakea. At the same time, existing telescopes are becoming obsolete. Further, many continue to argue that the 13 existing telescopes are too much. Yet despite all of this, the state continues to avoid producing a new comprehensive plan that updates the limit of astronomy development that appropriately balances science with the protection of the mountain’s natural and cultural resources. This single management failure explains so much of what’s happening on the mountain today, why Native Hawaiians do not trust the state’s ability to steward Maunakea, and why so many are so strident against future observatory development. This is why Native Hawaiians are calling for a new management structure for the mountain. This mo‘olelo is how we got here and and will continue to be the mo‘oküauhau of resilience of our Lähui. 

Kūpuna were removed by state officials from their positions at the front line of the Maunakea protest. Many were carried, assisted, and pushed in wheelchairs, as they were arrested and taken into custody. Top &amp; Middle Photo: Dino Morrow / Bottom Photo: Ruben Carillo - 4 Miles 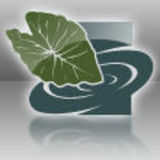 More from Ka Wai Ola - News For The Lāhui