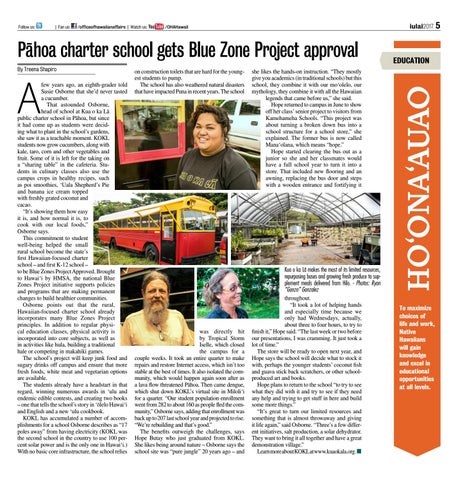 few years ago, an eighth-grader told Susie Osborne that she’d never tasted a cucumber. That astounded Osborne, head of school at Kua o ka Lä public charter school in Pähoa, but since it had come up as students were deciding what to plant in the school’s gardens, she saw it as a teachable moment. KOKL students now grow cucumbers, along with kale, taro, corn and other vegetables and fruit. Some of it is left for the taking on a “sharing table” in the cafeteria. Students in culinary classes also use the campus crops in healthy recipes, such as poi smoothies, ‘Uala Shepherd’s Pie and banana ice cream topped with freshly grated coconut and cacao. “It’s showing them how easy it is, and how normal it is, to cook with our local foods,” Osborne says. This commitment to student well-being helped the small rural school become the state’s first Hawaiian-focused charter school – and first K-12 school – to be Blue Zones Project Approved. Brought to Hawai‘i by HMSA, the national Blue Zones Project initiative supports policies and programs that are making permanent changes to build healthier communities. Osborne points out that the rural, Hawaiian-focused charter school already incorporates many Blue Zones Project principles. In addition to regular physical education classes, physical activity is incorporated into core subjects, as well as in activities like hula, building a traditional hale or competing in makahiki games. The school’s project will keep junk food and sugary drinks off campus and ensure that more fresh foods, white meat and vegetarian options are available. The students already have a headstart in that regard, winning numerous awards in ‘ulu and endemic edible contests, and creating two books – one that tells the school’s story in ‘ölelo Hawai‘i and English and a new ‘ulu cookbook. KOKL has accumulated a number of accomplishments for a school Osborne describes as “17 poles away” from having electricity (KOKL was the second school in the country to use 100 percent solar power and is the only one in Hawai‘i.) With no basic core infrastructure, the school relies

on construction toilets that are hard for the youngest students to pump. The school has also weathered natural disasters that have impacted Puna in recent years. The school

was directly hit by Tropical Storm Iselle, which closed the campus for a couple weeks. It took an entire quarter to make repairs and restore Internet access, which isn’t too stable at the best of times. It also isolated the community, which would happen again soon after as a lava flow threatened Pähoa. Then came dengue, which shut down KOKL’s virtual site in Miloli‘i for a quarter. “Our student population enrollment went from 282 to about 160 as people fled the community,” Osborne says, adding that enrollment was back up to 207 last school year and projected to rise. “We’re rebuilding and that’s good.” The benefits outweigh the challenges, says Hope Butay who just graduated from KOKL. She likes being around nature – Osborne says the school site was “pure jungle” 20 years ago – and

she likes the hands-on instruction. “They mostly give you academics (in traditional schools) but this school, they combine it with our mo‘olelo, our mythology, they combine it with all the Hawaiian legends that came before us,” she said. Hope returned to campus in June to show off her class’ senior project to visitors from Kamehameha Schools. “This project was about turning a broken down bus into a school structure for a school store,” she explained. The former bus is now called Mana‘olana, which means “hope.” Hope started clearing the bus out as a junior so she and her classmates would have a full school year to turn it into a store. That included new flooring and an awning, replacing the bus door and steps with a wooden entrance and fortifying it

Kua o ka La¯ makes the most of its limited resources, repurposing buses and growing fresh produce to supplement meals delivered from Hilo. - Photos: Ryan “Gonzo” Gonzalez throughout. “It took a lot of helping hands and especially time because we only had Wednesdays, actually, about three to four hours, to try to finish it,” Hope said. “The last week or two before our presentations, I was cramming. It just took a lot of time.” The store will be ready to open next year, and Hope says the school will decide what to stock it with, perhaps the younger students’ coconut fish and guava stick back scratchers, or other schoolproduced art and books. Hope plans to return to the school “to try to see what they did with it and try to see if they need any help and trying to get stuff in here and build some more things.” “It’s great to turn our limited resources and something that is almost throwaway and giving it life again,” said Osborne. “Three’s a few different initiatives, salt production, a solar dehydrator. They want to bring it all together and have a great demonstration village.” Learn more about KOKL at www.kuaokala.org. ¢

To maximize choices of life and work, Native Hawaiians will gain knowledge and excel in educational opportunities at all levels.