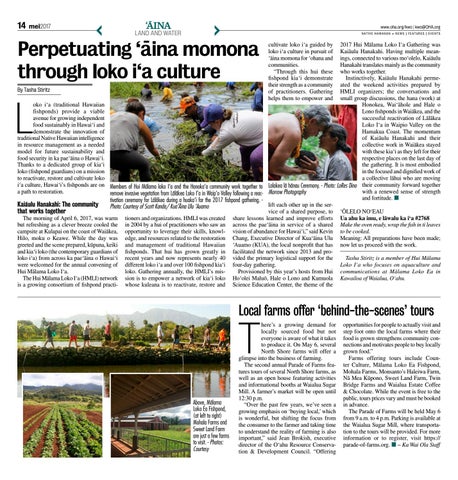 2017 Hui Mälama Loko I‘a Gathering was Kaiäulu Hanakahi. Having multiple meanings, connected to various mo‘olelo, Kaiäulu Hanakahi translates mainly as the community who works together. Instinctively, Kaiäulu Hanakahi permeated the weekend activities prepared by By Tasha Stiritz HMLI organizers; the conversations and small group discussions, the hana (work) at oko i‘a (traditional Hawaiian Honokea, Wai‘ähole and Hale o fishponds) provide a viable Lono fishponds in Waiäkea, and the avenue for growing independent successful reactivation of Läläkea food sustainably in Hawai‘i and Loko I‘a in Waipio Valley on the demonstrate the innovation of Hamakua Coast. The momentum traditional Native Hawaiian intelligence of Kaiäulu Hanakahi and their in resource management as a needed collective work in Waiäkea stayed model for future sustainability and with these kia‘i as they left for their food security in ka pae‘äina o Hawai‘i. respective places on the last day of Thanks to a dedicated group of kia‘i the gathering. It is most embodied loko (fishpond guardians) on a mission in the focused and dignified work of to reactivate, restore and cultivate loko a collective lähui who are moving i‘a culture, Hawai‘i’s fishponds are on Members of Hui Ma¯lama loko I‘a and the Honoka‘a community work together to Lalakea la¯ ha¯nau Ceremony. - Photo: LoRes Dino their community forward together a path to restoration. with a renewed sense of strength remove invasive vegetation from La¯la¯kea Loko I’a in Waip‘o Valley following a reac- Morrow Photography and fortitude. ¢ tivation ceremony for La¯la¯kea during a huaka‘i for the 2017 fishpond gathering. Kaia¯ulu Hanakahi: The community lift each other up in the ser¯ Photo: Courtesy of Scott Kanda/ Kua‘Aina Ulu ‘Auamo that works together vice of a shared purpose, to ‘Ölelo No‘eau The morning of April 6, 2017, was warm tioners and organizations. HMLI was created share lessons learned and improve efforts Ua ahu ka imu, e läwalu ka i‘a #2768 but refreshing as a clever breeze cooled the in 2004 by a hui of practitioners who saw an across the pae‘äina in service of a shared Make the oven ready, wrap the fish in ti leaves campsite at Kulapai on the coast of Waiäkea, opportunity to leverage their skills, knowl- vision of abundance for Hawai‘i,” said Kevin to be cooked. Hilo, moku o Keawe. While the day was edge, and resources related to the restoration Chang, Executive Director of Kua‘äina Ulu Meaning: All preparations have been made; greeted and the scene prepared, küpuna, keiki and management of traditional Hawaiian ‘Auamo (KUA), the local nonprofit that has now let us proceed with the work. and kia‘i loko (the contemporary guardians of fishponds. That hui has grown greatly in facilitated the network since 2013 and proloko i‘a) from across ka pae‘äina o Hawai‘i recent years and now represents nearly 40 vided the primary logistical support for the Tasha Stiritz is a member of Hui Mälama were welcomed for the annual convening of different loko i‘a and over 100 fishpond kia‘i four-day gathering. Loko I‘a who focuses on aquaculture and Hui Mälama Loko I‘a. loko. Gathering annually, the HMLI’s misProvisioned by this year’s hosts from Hui communications at Mälama Loko Ea in The Hui Mälama Loko I‘a (HMLI) network sion is to empower a network of kia‘i loko Ho‘olei Maluö, Hale o Lono and Kumuola Kawailoa of Waialua, O‘ahu. is a growing consortium of fishpond practi- whose kuleana is to reactivate, restore and Science Education Center, the theme of the

cultivate loko i‘a guided by loko i‘a culture in pursuit of ‘äina momona for ‘ohana and communities. “Through this hui these fishpond kia‘i demonstrate their strength as a community of practitioners. Gathering helps them to empower and

here’s a growing demand for locally sourced food but not everyone is aware of what it takes to produce it. On May 6, several North Shore farms will offer a glimpse into the business of farming. The second annual Parade of Farms features tours of several North Shore farms, as well as an open house featuring activities and informational booths at Waialua Sugar Mill. A farmer’s market will be open until 12:30 p.m. “Over the past few years, we’ve seen a growing emphasis on ‘buying local,’ which is wonderful, but shifting the focus from the consumer to the farmer and taking time to understand the reality of farming is also important,” said Jean Brokish, executive director of the O‘ahu Resource Conservation & Development Council. “Offering

opportunities for people to actually visit and step foot onto the local farms where their food is grown strengthens community connections and motivates people to buy locally grown food.” Farms offering tours include Counter Culture, Mälama Loko Ea Fishpond, Mohala Farms, Monsanto’s Haleiwa Farm, Nä Mea Küpono, Sweet Land Farm, Twin Bridge Farms and Waialua Estate Coffee & Chocolate. While the event is free to the public, tours prices vary and must be booked in advance. The Parade of Farms will be held May 6 from 9 a.m. to 4 p.m. Parking is available at the Waialua Sugar Mill, where transportation to the tours will be provided. For more information or to register, visit https:// parade-of-farms.org. ¢ – Ka Wai Ola Staff

Where have all the May Days gone?

Where have all the May Days gone?