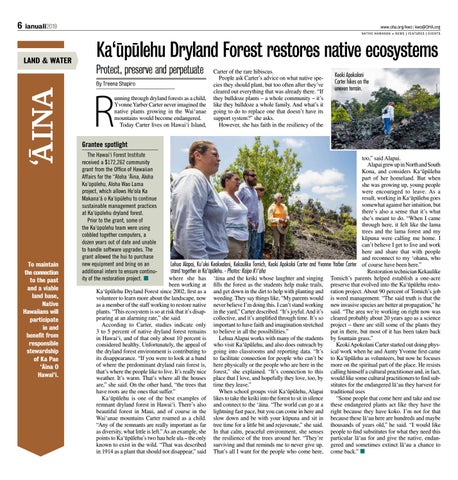 Carter of the rare hibiscus. People ask Carter’s advice on what native species they should plant, but too often after they’ve cleared out everything that was already there. “If they bulldoze plants – a whole community – it’s like they bulldoze a whole family. And what’s it going to do to replace one that doesn’t have its support system?” she asks. However, she has faith in the resiliency of the

To maintain the connection to the past and a viable land base, Native Hawaiians will participate in and benefit from responsible stewardship of Ka Pae ‘Āina O Hawai‘i.

The Hawai‘i Forest Institute received a $172,262 community grant from the Office of Hawaiian Affairs for the “Aloha ‘Äina, Aloha Ka‘üpülehu, Aloha Wao Lama project, which allows Ho‘ola Ka Makana‘ä o Ka‘üpülehu to continue sustainable management practices at Ka‘üpülehu dryland forest. Prior to the grant, some of the Ka‘üpülehu team were using cobbled together computers, a dozen years out of date and unable to handle software upgrades. The grant allowed the hui to purchase new equipment and bring on an additional intern to ensure continuity of the restoration project. ¢

too,” said Alapai. Alapai grew up in North and South Kona, and considers Ka‘üpülehu part of her homeland. But when she was growing up, young people were encouraged to leave. As a result, working in Ka‘üpülehu goes somewhat against her intuition, but there’s also a sense that it’s what she’s meant to do. “When I came through here, it felt like the lama trees and the lama forest and my küpuna were calling me home. I can’t believe I get to live and work here and share that with people and reconnect to my ‘ohana, who Lehua Alapai, Ku‘ulei Keakealani, Kekaulike Tomich, Keoki Apokolai Carter and Yvonne Yarber Carter of course have been here.” stand together in Ka‘ūpūlehu. - Photos: Kaipo K ı̄‘aha Restoration technician Kekaulike where she has ‘äina and the keiki whose laughter and singing Tomich’s parents helped establish a one-acre been working at fills the forest as the students help make trails, preserve that evolved into the Ka‘üpülehu restoKa‘üpülehu Dryland Forest since 2002, first as a and get down in the dirt to help with planting and ration project. About 90 percent of Tomich’s job volunteer to learn more about the landscape, now weeding. They say things like, “My parents would is weed management. “The said truth is that the as a member of the staff working to restore native never believe I’m doing this. I can’t stand working new invasive species are better at propagation,” he plants. “This ecosystem is so at risk that it’s disap- in the yard,” Carter described. “It’s joyful. And it’s said. “The area we’re working on right now was pearing at an alarming rate,” she said. collective, and it’s amplified through time. It’s so cleared probably about 20 years ago as a science According to Carter, studies indicate only important to have faith and imagination stretched project – there are still some of the plants they 3 to 5 percent of native dryland forest remains to believe in all the possibilities.” put in there, but most of it has been taken back in Hawai‘i, and of that only about 10 percent is Lehua Alapai works with many of the students by fountain grass.” considered healthy. Unfortunately, the appeal of who visit Ka‘üpülehu, and also does outreach by Keoki Apokolani Carter started out doing physthe dryland forest environment is contributing to going into classrooms and reporting data. “It’s ical work when he and Aunty Yvonne first came its disappearance. “If you were to look at a band to facilitate connection for people who can’t be to Ka‘üpülehu as volunteers, but now he focuses of where the predominant dryland rain forest is, here physically or the people who are here in the more on the spiritual part of the place. He resists that’s where the people like to live. It’s really nice forest,” she explained. “It’s connection to this calling himself a cultural practitioner and, in fact, weather. It’s warm. That’s where all the houses place that I love, and hopefully they love, too, by would like some cultural practitioners to find subare,” she said. On the other hand, “the trees that time they leave.” stitutes for the endangered lä‘au they harvest for have roots are the ones that suffer.” When school groups visit Ka‘üpülehu, Alapai traditional uses Ka‘üpülehu is one of the best examples of likes to take the keiki into the forest to sit in silence “Some people that come here and take and use remnant dryland forest in Hawai‘i. There’s also and connect to the ‘äina. “The world can go at a these endangered plants act like they have the beautiful forest in Maui, and of course in the lightning fast pace, but you can come in here and right because they have koko. I’m not for that Wai‘anae mountains Carter roamed as a child. slow down and be with your küpuna and sit in because these lä‘au here are hundreds and maybe “Any of the remnants are really important as far tree time for a little bit and rejuvenate,” she said. thousands of years old,” he said. “I would like as diversity, what little is left.” As an example, she In that calm, peaceful environment, she senses people to find substitutes for what they need this points to Ka‘üpülehu’s two hau hele ula – the only the resilience of the trees around her. “They’re particular lä‘au for and give the native, endanknown to exist in the wild. “That was described surviving and that reminds me to never give up. gered and sometimes extinct lä‘au a chance to in 1914 as a plant that should not disappear,” said That’s all I want for the people who come here, come back.” ¢

“The Eddie” will go - A group of Native Hawaiian organizations are partnering with the Aikau family, to bring back the understanding of surf...

“The Eddie” will go - A group of Native Hawaiian organizations are partnering with the Aikau family, to bring back the understanding of surf...