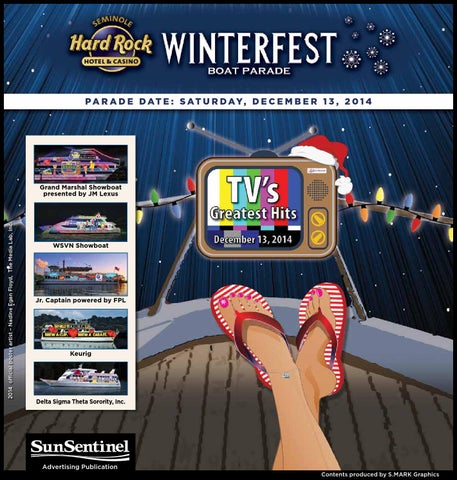 FLO RIDA WILL ROCK THE WATERWAY AS THE GRAND MARSHAL

On Saturday, Dec.13, the 2014 Seminole Hard Rock Winterfest® Boat Parade Grand Marshal will be rocking the Fort Lauderdale waterways. Join us as we welcome 2014 Seminole Hard Rock Winterfest® Boat Parade Grand Marshal, and South Florida native, Flo Rida.  A pop & hip hop music sensation, Flo Rida will be aboard the JM Lexus Grand Marshal Showboat riding “low, low, low, low” on the Nova Southeastern University bow, waving to more than one million spectators along the 12 mile Parade route, brought to you by the Seminole Hard Rock Hotel & Casino. Flo Rida, otherwise known as Tramar Dillard, was born in Carol City and raised with his seven sisters.  A hometown boy, Flo Rida has stayed involved with the South Florida community by giving back and being involved with a variety of local charitable organizations that focus on youth, sports, and local musicians.  Since the launch of his music career seven years ago, Flo Rida has been recognized as one of Billboard Magazine’s “Hot 100”, has won a People’s Choice award, a Teen’s Choice award, an International Dance Music award, and many more.  He has had a number of #1 hits, including “Low” featuring T-Pain, “Right Round”, “Wild Ones”, “Whistle”, and many many more! On Parade night, remember to “throw your hands in the air” and give a wave to our 2014 Grand Marshal Flo Rida.

Everyone will be dressed to the nines in dapper black tie and glitzy ball gowns Saturday, December 6th for the Seminole Hard Rock Winterfest® Black Tie Ball presented by Moët & Chandon in association with Absolut Vodka, Milestone Wines and Southern Wine & Spirits. Guests will party the night away at Hard Rock Live with the “Who’s Who” to officially kick off the holiday season in South Florida. A Special performance direct from Broadway’s “Motown the Musical” is one of the highlighted features with “Flavors” performing throughout the night thanks to the sponsorship of Greenspoon Marder Law. 1

The evening will start the Welcome Reception presented by Patriot National, Inc. within an intoxicating ambiance of extravagance. The Fidelity Investments Silent Auction is open to the public as well as guests. Simply register on qtego.net/qlink/ Winterfest® to bid. The Moët and Chandon splits, Absolut Vodka and Avion Tequila ice bar, along with cool beverages from Southern Wine & Spirits featuring Milestone Wines will keep the libations flowing. The ultimate host, the Seminole Hard Rock Hotel & Casino transforms Hard Rock Live every year into a breath-taking, aweinspiring experience. This year, the décor is a nod to Motown and the Winterfest’s® relationship with Broadway Across America who has a showboat in the Parade. The 2014 Belle of the Ball is Diana Reed of WSVN, the producer of the Parade’s Television Show. Seminole HardRock Winterfest® Black Tie Ball Chairwomen Susan Renneisen and Lori Perlman will be wearing dazzling gowns designed by Zola Keller and jewelry by Carroll’s Jewelers.

BEST PLACE TO VIEW THE PARADE

For the past 20 years, Lisa Scott-Founds has been the woman in charge as President and CEO of the largest live event in Florida - the Seminole Hard Rock Winterfest® Boat Parade. As a Florida native, Lisa grew up with “The Greatest Show on H2O” and cherishes this South Florida family tradition. At the recent Winterfest® White Party, Lisa was honored by letters from President Barack Obama and Governor Rick Scott on her milestone achievements. A video presentation, along with a Go Riverwalk Cover and coffee table book highlighting her legacy with the Parade were displayed.

If you are looking for the best seats on land to view the 43rd Annual Seminole Hard Rock Winterfest® Boat Parade, look no further! A spot in the Grandstand Viewing Area will offer you the perfect view of the decorated boats on the waterway. This ideal seating is located inside the historic Birch State Park on the northeast corner of Sunrise Boulevard and the Intracoastal Waterway. Join other spirited viewers as we “reel” in the holiday spirit! The gates open at 3:30 P.M. Shuttles will take the viewers from the parking location at the Galleria Mall to the designated area of the park. All tickets are pre-reserved and assigned to ensure that everyone has a comfortable and up-close view of the Parade.

Another native on the team is Dawn Read, Winterfest® Event Director, who orchestrates the development of the Showboats and events under the Winterfest® Celebration. Kathy Keleher, who traded her snow boots for boat shoes, is the Marketing and Parade Director for the Seminole Hard Rock Winterfest® Boat Parade. Together, these ladies, bring their years of experience to South Florida waterways, filling them with lights, music, and fun with the support of more than 50 active board members, interns and 300+ volunteers annually.

OWN A PIECE OF WINTERFEST® Winterfest® merchandise is now on sale! Be a part of the Parade experience with hand-painted glass ornaments as well as Winterfest® charms. Call 954767-0686 or visit our website WinterfestParade. com to place an order. Winterfest® ornament designed by Pat Anderson

AHOY!– MANDATORY CAPTAIN’S MEETING DEC. 8TH MANDATORY MEETING presented by Show Management and hosted by The Grateful Palate. The meeting will include a review of the Parade rules and waterway route, as well as dinner at the new Grateful Palate on the Intracoastal. Parade numbers and well- stocked goodie bags will be distributed. Parade manual will be available for download before the meeting.

CULINARY COURTYARD When you are ready to sit and indulge in a savory meal, the Culinary Courtyard is the perfect place to go. The Culinary Courtyard will sell Milestone Wines, Coca-Cola, Michelob Ultra and delectable food. TICKETS: $25 for adult plus tax/$20 per child plus tax (10 and under) Walking into the park: We offer a $5 general admission fee PARK & RIDE: There is no parking located inside Birch State Park the day of the Parade. There is a park and ride service with designated parking located at the Galleria Mall. Busses are only $5 per person, round trip, children 3 and under ride free and parking is free Reminder: The Parade will go on rain or shine and there are no refunds admitted. No pets, cans, or coolers are permitted inside the Grandstand area.

Alex Casamento suffers from Polyarticular Juvenile Idiopathic Arthritis (JIA), which is an autoimmune disease that impacts his toes, ankles, knees, hips, back, neck, shoulders, elbows, and fingers. Alex is one of 300,000 kids in the U.S. who suffer with this painful, debilitating and incurable disease. Alex was born in Russia, adopted at eight months old, and hospitalized for the first time ten days after coming home. Alex was diagnosed at age 5 and does not remember a time without pain, doctors, and medications. By winning this contest, Alex will be able to spread necessary awareness to juvenile arthritis.

This year twelve charities submitted nominees to be Jr. Captain. The Facebook campaign had over 5,000 votes, and Alex secured a whopping 1,600 votes. Congratulations, Alex! Wave to him aboard the Carrie B.

The organizers of the Seminole Hard Rock Winterfest® Boat Parade have selected local artist Nadine Floyd as the 2014 poster artist. Nadine took a different perspective of the Parade; a view of a boater on the bow of their entry. The inclusion of the retro television set embellishes the poster with this year’s theme “TV’s Greatest Hits.”

SEE THE PARADE ON TV!

TURN ON YOUR LIGHTS; WAVE TO THE GRAND MARSHAL AND BE ON TV Residents and businesses located along Intracoastal Waterways and the New River can be a part of the Seminole Hard Rock Winterfest® Boat Parade by decorating their property or dock. On Parade night, the shores will light up the sky as the official backdrop for the award-winning Parade. WSVN Channel 7 will feature the best of the best decorated homes and businesses along the Parade route. Be sure to give your best Parade wave to photographers, film crew and Grand Marshal Flo Rida aboard the Floridian Princess before the Parade.   Take a selfie with the Parade in the background and #winterfestsoflo14. Photos might be seen in the Parade on our Social Media Boat. Look for these WOW ENTRIES

SOUTH FLORIDA: Watch the Winterfest® Television Special on WSVN 7 on December 20 (8 p.m.), December 25 and January 1 (5 a.m. and 1 p.m.). BOSTON: sister stations will air the Parade December 21 at noon and December 24 at 1 a.m. (WHDH) and December 21 at 2 p.m. and December 27 at noon. (WLVI). STATE OF FLORIDA: Winterfest® Television Special is shared around the state through network partnership with WSVN and Fox Sports Network as it is rebroadcast throughout the holiday season on Fox Sun Sports. SEE IT LIVE: LOCALLY: The ‘World’s Most Watched Boat Parade’ can be seen live on Fort Lauderdale’s city station – Comcast Channel 78. AROUND THE WORLD: EyeOnSouthFlorida.com will stream the Parade live with a link on Winterfestparade.com Check our website for details and video highlights of events throughout the season.

YOUNG WINTERFEST® ARTISTS All Broward County Students in 3rd-5th grade can submit an 8-1/2” x 11” original artwork for our Fantasy Boat Contest – but submit your artwork today to be able to pick up your ticket to board the El Galeon prior to its departure on December 14th. ALL Participants in the contest will receive a ticket to the South Florida Fair. Artwork will be on display in March at the Galleria Fort Lauderdale.

Download the iPhone Santa Boat Tracker for your iPhone or iPad.

BE A VIP AT THE PARADE

Winterfest® sponsors, board members and community leaders will be viewing the Parade at Laura Ward Park and the Stranahan House. Special thanks to Huizenga Family. Supreme Lending will add ambiance to the area. Guests will enjoy the lights of the parade with Nova Southeastern University 3D glasses!

The application offers music, coloring and a tracker for the Baptist Health Santa Boat as it journeys along the Parade route.

“The Seminole Hard Rock Winterfest® Boat Parade is truly a fun, entertaining, and unique way for family and friends to enjoy the holiday season

As Fort Lauderdale’s signature holiday event for 43 years, Winterfest® captures the imagination of the area’s residents and visitors, while showcasing our tropical city to a global audience and generating millions of dollars for our local economy.

This celebratory event honors the people who play a huge role in the success of Winterfest® – our volunteers! Hosted by Grille 401, we offer a big “thank you” to our volunteers and honor one person with the Carolyn McLaughlin Spirit of Volunteerism Award.

Creatively decorated vessels illuminate the New River and Intracoastal Parade route while putting smiles on the faces of one million spectators. Please join us for this enchanted evening on the water that symbolizes the spirit and tradition of the holiday season.”

“The Seminole Hard Rock Winterfest Boat Parade kicks off the holiday season with a celebration of Greater Fort Lauderdale’s water culture, and a dazzling welcome to visitors from across the globe.”

“The Seminole Hard Rock Winterfest® Boat Parade showcases Broward County’s beautiful waterways and winter weather. It is a holiday tradition cherished by our residents and visitors alike, and on behalf of the Broward County Commission, I thank everyone involved in bringing us this signature holiday event.”

Enjoy your next flight.

DuBois PA We offer more routes within FloridaJohnstown and between Morgantown Florida and the Bahamas than any other Washington airline. (Dulles) Clarksburg Parkersburg Shenandoah/Staunton

Go to silverairways.com/boat20 for more information. 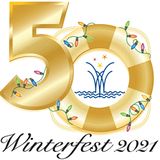 Winterfest 2014 Souvenir Journal in the SunSentinel

Winterfest 2014 Souvenir Journal in the SunSentinel