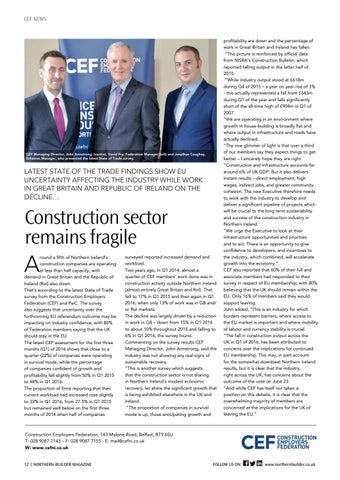 round a fifth of Northern Ireland’s construction companies are operating at less than half capacity, with demand in Great Britain and the Republic of Ireland (RoI) also down. That’s according to the latest State of Trade survey from the Construction Employers Federation (CEF) and PwC. The survey also suggests that uncertainty over the forthcoming EU referendum outcome may be impacting on industry confidence, with 80% of Federation members saying that the UK should stay in the EU. The latest CEF assessment for the first three months (Q1) of 2016 shows that close to a quarter (22%) of companies were operating in survival mode, while the percentage of companies confident of growth and profitability fell slightly from 50% in Q1 2015 to 48% in Q1 2016. The proportion of firms reporting that their current workload had increased rose slightly to 33% in Q1 2016, from 27.5% in Q1 2015 but remained well below on the first three months of 2014 when half of companies

surveyed reported increased demand and workload. Two years ago, in Q1 2014, almost a quarter of CEF members’ work done was in construction activity outside Northern Ireland (almost entirely Great Britain and RoI). That fell to 17% in Q1 2015 and then again in Q1 2016, when only 13% of work was in GB and/ or RoI markets. The decline was largely driven by a reduction in work in GB – down from 15% in Q1 2014 to about 10% throughout 2015 and falling to 6% in Q1 2016, the survey found. Commenting on the survey results CEF Managing Director, John Armstrong, said the industry was not showing any real signs of sustainable recovery. “This is another survey which suggests that the construction sector is not sharing in Northern Ireland’s modest economic recovery, let alone the significant growth that is being exhibited elsewhere in the UK and Ireland. “The proportion of companies in survival mode is up, those anticipating growth and

profitability are down and the percentage of work in Great Britain and Ireland has fallen. “This picture is reinforced by official data from NISRA’s Construction Bulletin, which reported falling output in the latter half of 2015. “While industry output stood at £618m during Q4 of 2015 – a year on year rise of 3% - this actually represented a fall from £643m during Q1 of the year and falls significantly short of the all-time high of £904m in Q1 of 2007. “We are operating in an environment where growth in house-building is broadly flat and where output in infrastructure and roads have actually declined. “The one glimmer of light is that over a third of our members say they expect things to get better – I sincerely hope they are right. “Construction and infrastructure accounts for around 6% of UK GDP. But it also delivers instant results – direct employment, high wages, indirect jobs, and greater community cohesion. The new Executive therefore needs to work with the industry to develop and deliver a significant pipeline of projects which will be crucial to the long term sustainability and success of the construction industry in Northern Ireland. “We urge the Executive to look at their infrastructure opportunities and priorities and to act. There is an opportunity to give confidence to developers, and incentives to the industry, which combined, will accelerate growth into the economy.” CEF also reported that 60% of their full and associate members had responded to their survey in respect of EU membership, with 80% believing that the UK should remain within the EU. Only 16% of members said they would support leaving. John added, “This is an industry for which borders represent barriers, where access to the EU market is important and where mobility of labour and currency stability is crucial. “The fall in construction output across the UK in Q1 of 2016, has been attributed to concerns over the implications for continued EU membership. This may, in part account for the somewhat downbeat Northern Ireland results, but it is clear that the industry, right across the UK, has concerns about the outcome of the vote on June 23. “And while CEF has itself not taken a position on this debate, it is clear that the overwhelming majority of members are concerned at the implications for the UK of leaving the EU.” 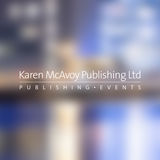