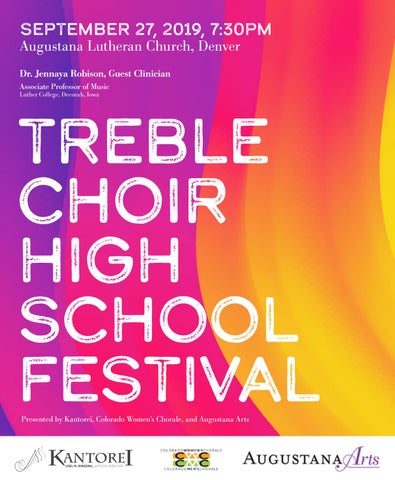 Voice on the Wind

PERFORMERS Chorlalettes The Arapahoe Warriors Vocal Music program was founded in 1964 and currently serves over 200 students with the mission that All Belong In Song. The performing groups at AHS participate in a minimum of two home concerts each year at the school, they host a Valentine’s Day Cabaret, and the vocal music ensembles regularly participate in festivals, contests, and community events throughout each year. The Arapahoe High School Choralettes are an auditioned ensemble of 9th - 12th grade students who had the opportunity to perform in New York City in March of 2019 and are eagerly awaiting the announcement of the destination for an international tour anticipated for the Spring of 2021. Kirk Schjodt is in his 12th year as a choral director and is currently in his 3rd year as the director of vocal music at Arapahoe High School in Centennial, CO. Mr. Schjodt holds a Master of Music degree in Choral Conducting from the University of Nebraska-Lincoln and a Bachelor Arts degree in Music Education from Dana College. He is grateful that his students have the opportunity to participate in today’s festival! Girls’ 21 is an auditioned treble choir from Cherry Creek High School, a rigorous public school recognized as a GRAMMY Signature School of Excellence. Girls’ 21 is comprised of 38 sophomore, junior and senior students dedicated to finding the fun in being serious about excellence. The choir stresses not only the aesthetics of music, but also an understanding of music literacy, theory, and history through the performance of quality choral literature. Adam Cave is in his seventeenth year teaching and eleventh year as choir director at Cherry Creek High School where he was recognized as the 2015 Teacher of the Year. Adam recently served as president of Colorado ACDA from 2017 to 2019. He received his Bachelor of Music in Music Education through the University of Puget Sound in Tacoma, Washington, and his Master of Music in Music Education and Conducting through Colorado State University in Fort Collins, Colorado. Broomfield Belles is a highly select SSAA ensemble comprised of sophomores through seniors dedicated to making high quality music while nurturing a safe, inclusive community. They are Broomfield High School’s newest choir and performed at the Colorado Music Educator Association conference in 2017. Michael Bizzaro is in his 9th year teaching choral music in Colorado. At Broomfield High School, Mr. Bizzaro directs the school’s 6 choirs, music directs the annual musical, and directs the annual POPS Show. His choirs have performed at state and national conferences. He currently serves the state of Colorado as the district 2 vocal music representative. Mr. Bizzaro holds Bachelor of Music degrees in Music Education and Composition from Ohio Northern University, and a Master of Music in Choral Conducting from the University of Colorado at Boulder. Professionally, Mr. Bizzaro sings with the Denver based choir Kantorei where he also serves on the Board of Directors.

Enchantment is in its 38th year of existence at Fairview High School. It is a select group of 68 singers, primarily juniors. Enchantment is part of the regular accredited curriculum and rehearses four days a week. Through musical experiences and classroom discussions the members develop not only aesthetic awareness, but also social and environmental appreciation that enriches theirs lives and has a positive impact on their surrounding community. Janice Vlachos received her B.M. from Belmont University in Nashville in 1992. She is currently enjoying her twenty-seventh year as a high school choral director. She returned “home” to Fairview High School in 2005, where her love of music originally began as a student. Mrs. Vlachos directs five choirs, serves as the Fine Arts chairperson, and is director/producer of the annual musical. She is a member of CMEA, JEN, and ACDA. The Chorale, under the direction of Dr. Ryan Garrison, is the premiere choral ensemble at the Denver School of the Arts. The ensemble has been invited to sing at the Colorado Music Educators’ Annual conference numerous times (2004, 2007, 2010, 2014) and has collaborated with several Denver choirs in concerts including The Spiritual Project, the Colorado Symphony Chorus, and the CU-Boulder University Singers, and looks forward to performing with Columbine High School this coming year. They have performed in concerts, festivals, and clinics in New York City, Honolulu, Miami, Puerto Rico, San Francisco, Boston, and Washington DC. Dr. Ryan Garrison is a newly appointed Director of Choral and Vocal Music at the Denver School of the Arts. Prior to his return to Denver, Garrison was an active performer, conductor, and educator in Phoenix, Arizona and San Antonio, Texas. From 2005-2017, Garrison was a singing member of the acclaimed Phoenix Chorale and is credited on four albums, garnering six GRAMMY nominations and two GRAMMY wins, including “Best Choral Performance” in 2016. As guest conductor/clinician, Garrison has led regional and state-level honor choirs and orchestras in Texas, Arizona, Colorado, and Wyoming. In the coming year, he looks forward to conducting the Colorado Middle School AllState Cambiato Choir, and the ACDA Wyoming All-State Children’s Choir. The Colorado Women’s Chorale has been practicing the art of Women Promoting Artistry Through Music since 2003. The CWC is an auditioned group of 45 soprano and alto voice producing 4-5 concerts a year with an emphasis on music written specifically for women’s voices. The choir loves to travel to perform, as has toured to Sydney Australia, Italy, and New York. The choir is planning future trips abroad and a return trip to Carnegie Hall. Jennifer Ferguson has been the director of the CWC since 2003 and founded the Colorado Men’s Chorale in 2016. She earned her B.M. in music education from Saint Mary’s College at Notre Dame in 2006, and in 2010 she finished her Master of Music degree in conducting at the Lamont School of Music at the University of Denver. Jennifer is proud to be a singer and a Board member of the professional Evans Choir and also teaches music at Cory Elementary in Denver. She has been the guest conductor of the Poudre District Honor Choir and the Arvada Honor Choir, and will be adjudicating the 35th Annual High School Treble Festival in South Bend, Indiana in 2019.

PERFORMERS Kantorei is a premier choral ensemble based in Denver and comprised of volunteer singers under the direction of Artistic Director Joel M. Rinsema. Kantorei’s choral artists have studied at schools with strong music programs across the United States such as Baylor University, Brigham Young University, Eastman School of Music, Indiana University, St. Olaf College, Wartburg College, and Westminster Choir College. Many of the singers serve as choral music educators, conductors, and teachers. In addition to its Denver-based concert season, Kantorei frequently performs at major choral conventions across the U.S., has toured around the world, and works with composers and conductors of international renown. Naxos released Kantorei’s recording—its first to be professionally produced—of works by Kim André Arnesen in 2018. In May 2019, Kantorei recorded the music of Jake Runestad, anticipating release in the spring of 2020. Santa Barbara Music Publishing Inc., publishes the Kantorei Choral series. Kantorei performs a broad range of a cappella choral music with the mission “to elevate the human experience through choral excellence.” Managing Artistic Director Joel M. Rinsema joined Kantorei in 2014, becoming the second conductor in its history. A frequent collaborator and champion of new works for chorus, Joel has commissioned and premiered work of many of today’s leading composers including Kim André Arnesen, Ola Gjeilo, Cecilia McDowall, Jake Runestad, and Eric Whitacre. In the summer of 2018, Joel conducted the Central American premiere of Ola Gjeilo’s “Dreamweaver” in Guatemala City and Antigua, Guatemala with Capella Cantorum de Guatemala. Joel is a passionate advocate for the professional choral art form, and he frequently consults with other choral arts organizations around the country. Because of his leadership in his field, he received the Louis Botto Award for “Innovative Action and Entrepreneurial Zeal” from Chorus America, the industry’s advocacy, research, and leadership development organization for choruses, choral leaders, and singers. Joel serves as the North American Choral Promotion Manager for Oxford University Press based in Oxford, England and Music Director at First Plymouth Congregational Church in Cherry Hills Village, Colorado. He holds music degrees from Arizona State and Whitworth Universities and is a member of the Academy of Recording Arts and Sciences (Grammys), American Choral Directors Association (ACDA) and Colorado Music Educators Association (CMEA).

PLEASE CONSIDER TURNING IN YOUR PROGRAM AT THE END OF THE CONCERT TO BE RE-USED AND RECYCLED.

Dr. Jennaya Robison is in demand as a conductor, clinician, and soprano throughout the United States. She currently serves as Associate Professor of Music at Luther College (Decorah, Iowa) where she conducts Aurora, Collegiate Chorale, and the Luther College Gospel Choir and teaches courses in conducting and vocal pedagogy. This summer she joined the conducting faculty for the summer Master of Music program in choral conducting at Simpson College in partnership with CORO. Prior to moving to Iowa, she was the Artistic Director of Scottsdale Musical Arts, a multi-generational organization comprised of a professional orchestra and choir as well as children’s choirs and youth orchestras. She has taught in public schools in Iowa, Minnesota, and Wisconsin. She is also active as a church musician and serves as Director of Music at First Lutheran Church, Decorah, Iowa. Dr. Robison has presented lectures and workshops at national, regional, and state ACDA conferences and state NATS conferences. She has been an invited conductor and clinician at numerous festivals including All State Choirs in Minnesota, Wisconsin, and North Dakota, Wisconsin Middle Level Honors Choirs, Alabama Collegiate Honor Choirs, Texas

Collegiate Women’s Honor Choir, Montreat Music Conference Festival Choir (North Carolina) and various regional and state honor choirs in Colorado, Texas, Nevada, Arizona, Illinois, Iowa, Minnesota, and Wisconsin.  She will serve as guest conductor of the Consort Chorale, San Francisco in 2020 and make her Carnegie Hall conducting debut in the summer of 2021. She holds the Doctor of Musical Arts in Choral Conducting from the University of Arizona, the Master of Music in conducting and voice from the University of New Mexico, and the Bachelor of Arts in music from Luther College.  She is currently the coordinator of Collegiate Repertoire and Standards and director of Student Activities for the North Central chapter of the American Choral Directors Association. Her choral series is published with Pavane Music and additional arrangements and compositions are published by Kjos Music and Morningstar Music. She resides in Decorah, Iowa with her husband Brett and three children, Elise, Grace, and Benjamin. 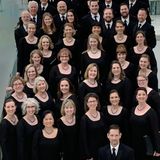