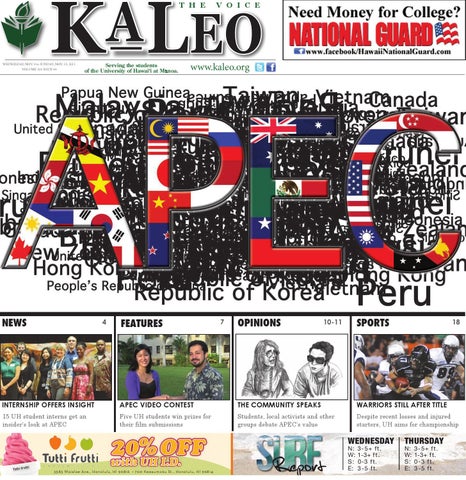 Serving the students of the University of Hawai‘i at Mānoa.

15 UH student interns get an insider’s look at APEC

Despite recent losses and injured starters, UH aims for championship

A slacker’s guide to APEC

Meat eaters needed for a study where dinner* will be provided Monday thru Friday for 8 weeks on the UH M¯anoa campus (*an estimated $400 value). Study period: Spring 2012 Participants that complete the entire study will receive $210 in gift cards as compensation for time and travel

It’s dominated local headlines for months, forced the closure of key city roadways and caused speculation that it might be Honolulu’s equivalent to Carmageddon. But what exactly is the Asia-Paciﬁc Economic Cooperation? Who does it represent, and what are its stated aims? Here are a few fast facts on what this group is all about.

This study is approved by the UH Committee on Human Subjects

GIVE YOUR CAREER A SHOT OF ADRENALINE.

W H AT APEC describes itself as the “premier Asia-Paciﬁ c economic forum,” whose “primary goal is to support sustainable economic growth and prosperity in the Asia-Paciﬁ c region.” A PEC focuses on three areas, or pillars: trade and investment liberalization, business facilitation, and economic and technical cooperation. The 21 member economies account for 55 percent of global GDP.

WHEN APEC was established in 1989 with 12 original members. Each year, APEC holds a meeting that includes representatives from all member economies, including the heads of state. This year’s APEC Leaders’ Week began on Nov. 7 and con-

WHERE The location of the meeting rotates among members, and this is the second time in APEC’s history that a meeting has been held in the United States. The first meeting on American soil was in Seattle in 1993. Honolulu was selected as the site of the 2011 meeting after a bid was submitted by the EastWest Center, the Hawai‘i Tourism Authority, the Hawai‘i Congressional Delegation, the military and local business leaders. Next year’s meeting will take place in Vladivostok, Russia.

WHY APEC champions “free and open trade and investment” and aims to promote and accelerate regional economic integration. For more information, visit www.apec.org or www. apec2011hawaii.com.

PERCENT OF THE TOTAL GLOBAL GDP COMES FROM APEC MEMBERS WAS THE LAST YEAR THE U.S. HOSTED APEC MEMBER ECONOMIES

A group of protesters delivered a petition to University of Hawai‘i administration on Oct. 28, asking that the “Welcome APEC” sign on Bachman lawn be taken down. The sign has since been removed, but not because of the petition. “The sign was removed after we were advised by the city that such signs are allowed to be posted for seven days. It was moved last Wednesday to the Campus Center to help promote the student APEC event that was held Thursday,” said Gregg Takayama, director of community and government relations. KITV reported that although the protesters’ argu-

ment that the sign was an inaccurate representation of the sentiments of the UH community did not cause the change, the attention they brought to the sign led to the sign’s removal. But upon scrutiny, it turned out that Hawai‘i’s tough billboard laws indeed limited the amount of time the sign could be on display. “The idea behind the APEC sign was to promote campus awareness and discussion of APEC, and it seems to have achieved that purpose,” said Takayama. After the APEC sign was removed, it was replaced by a sign advertising Kennedy Theatre’s production of Oklahoma!, which was covered brieﬂ y with a quilt before being unveiled last week. Tien Austin contributed to this report.

News Congressman to speak about Philippines DAVID TER AOK A Staff Writer Filipino congressional delegate, author and activist Walden Bello will be giving a talk titled â&#x20AC;&#x153;Geopolitics in APEC: Philippines, China and the U.S. PaciďŹ c Commandâ&#x20AC;? tomorrow in order to provide context for the Asia-Pacific Economic Cooperation. â&#x20AC;&#x153;We want to provide a forum for the critical voices surrounding APEC,â&#x20AC;? said Vina Lanzona, director of the Center for Filipino Studies at the University of Hawaiâ&#x20AC;&#x2DC;i at MÄ noa, who arranged for Bello to speak. The talk will focus on Chinaâ&#x20AC;&#x2122;s rise to power and its relationship to the U.S. and the Philippines. Bello is in Hawaiâ&#x20AC;&#x2DC;i to give the keynote speech for Moana Nui 2011, according to Lanzona. After learning of Belloâ&#x20AC;&#x2122;s trip to Honolulu, she contacted him about giving a speech at UH MÄ noa, and he agreed. Lanzona expressed excitement about support from diverse groups on campus, including the

College of Arts and Humanities and the OfďŹ ce of the Vice Chancellor of Academic Affairs. â&#x20AC;&#x153;Weâ&#x20AC;&#x2122;re glad we are able to do this with so many different co-sponsorships,â&#x20AC;? she said. Walden Bello is no stranger to protest. Bello received his doctorate in sociology at Princeton three years after the Philippines was placed under martial law in 1972. He devoted his life to political activism and founded agencies to ďŹ ght for democracy in the Philippines. He was arrested repeatedly for leading a nonviolent takeover of a Philippine consulate and later stole 3,000 pages of conďŹ dential documents from the World Bank headquarters. He has written 15 books, his most recent being â&#x20AC;&#x153;Food Wars,â&#x20AC;? an analysis of the global food crisis. He has taught at the University of California Berkeley, and later moved back to the Philippines to teach at the University of Manila. The congressman has fought for many causes, ranging from

reproductive rights to land disputes. In July, he took a trip to the Spratly Islands, a group of disputed island territories in the South China Sea. The islands, which may be rich in oil, are claimed by China, the Philippines, Brunei, Vietnam, Taiwan and Malaysia. Currently, Bello represents Akbayan, or the Citizensâ&#x20AC;&#x2122; Action Party, in the House of Representatives of the Philippines. He is also the executive director of Focus on the Global South, a nongovernmental organization based in Bangkok, Thailand, that seeks to ďŹ ght globalization. Lanzona said she thinks Belloâ&#x20AC;&#x2122;s viewpoint will be popular. â&#x20AC;&#x153;Heâ&#x20AC;&#x2122;s a radical in his political thinking, but scholarly ... he uses facts to back up his arguments.â&#x20AC;? What: â&#x20AC;&#x153;Geopolitics in APEC: Philippines, China and the U.S. Pacific Commandâ&#x20AC;? Where: UH Architecture Building When: Nov. 10, 5 p.m.

Susan Saladoff shows with incandescent clarity that the unabashed aim of the â&#x20AC;&#x2DC;tort reformersâ&#x20AC;&#x2122; is to shield large corporations from being held accountable. Gerald L. Shargel â&#x20AC;&#x201C; The Daily Beast

Forum encourages creative response to APEC DAVID TER AOK A Staff Writer Artists and activists from across the PaciďŹ c gathered at the University of Hawaiâ&#x20AC;&#x2DC;i at MÄ noaâ&#x20AC;&#x2122;s Art Auditorium Nov. 6 for alterna*APECâ&#x20AC;&#x2122;s Forum(to) Festival, a panel discussion on the global inďŹ&#x201A; uence of the Asia-PaciďŹ c Economic Cooperationâ&#x20AC;&#x2122;s exclusionary corporate politics. Featured panelists included Mike Bonanno of The Yes Men, a self-proclaimed identity-correction service group that has garnered national media attention for its impersonations. Bonanno expressed concern about A PEC, saying, â&#x20AC;&#x153;Hawaiâ&#x20AC;&#x2DC;i has such a small population compared to A PEC.â&#x20AC;? According to Bonanno, the eventâ&#x20AC;&#x2122;s imminence warrants immediate action. He also called attention to protesters who were in the audience, some of whom had been arrested the previous night. With over half a million dollars being used to buy nonlethal weapons for the local police, he said he hopes the Occupy movement can help give A PEC the attention it needs. Many groups and individuals spoke out against APECâ&#x20AC;&#x2122;s corporate politics, which they feel exclude