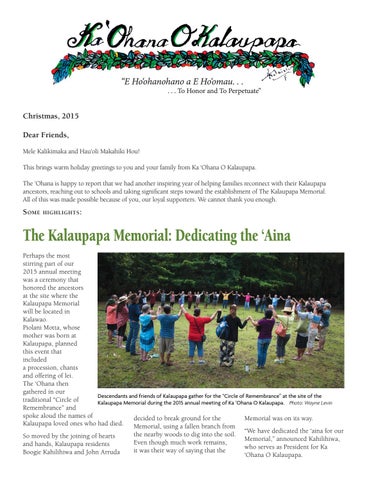 Christmas, 2015 Dear Friends, Mele Kalikimaka and Hau‘oli Makahiki Hou! This brings warm holiday greetings to you and your family from Ka ‘Ohana O Kalaupapa. The ‘Ohana is happy to report that we had another inspiring year of helping families reconnect with their Kalaupapa ancestors, reaching out to schools and taking significant steps toward the establishment of The Kalaupapa Memorial. All of this was made possible because of you, our loyal supporters. We cannot thank you enough.

The Kalaupapa Memorial: Dedicating the ‘Aina Perhaps the most stirring part of our 2015 annual meeting was a ceremony that honored the ancestors at the site where the Kalaupapa Memorial will be located in Kalawao. Piolani Motta, whose mother was born at Kalaupapa, planned this event that included a procession, chants and offering of lei. The ‘Ohana then gathered in our Descendants and friends of Kalaupapa gather for the “Circle of Remembrance” at the site of the traditional “Circle of Kalaupapa Memorial during the 2015 annual meeting of Ka ‘Ohana O Kalaupapa. Photo: Wayne Levin Remembrance” and spoke aloud the names of decided to break ground for the Memorial was on its way. Kalaupapa loved ones who had died. Memorial, using a fallen branch from “We have dedicated the ‘aina for our the nearby woods to dig into the soil. So moved by the joining of hearts Memorial,” announced Kahilihiwa, Even though much work remains, and hands, Kalaupapa residents who serves as President for Ka it was their way of saying that the Boogie Kahilihiwa and John Arruda ‘Ohana O Kalaupapa.

Designing the Memorial A Design Team of professionals and cultural specialists, including Kahilihiwa, has been meeting through the year to develop an image of the Kalaupapa Memorial. In 2009, President Barack Obama authorized Ka ‘Ohana O Kalaupapa to establish a Memorial that would list the names of the nearly 8,000 individuals who were sent to Kalaupapa. According to the wishes of Friends of Bernard Punikai‘a who are directors for the Coalition For Specialized Housing visited the ahu built by the Memorial Design Team of Ka ‘Ohana O Kalaupapa. The visit took place on the Kalaupapa residents, the August 29, 2015, which would have been Bernard’s 85th birthday. Bernard’s photo – and spirit – Memorial will be located on the accompanied them on the trip. Photo: Ka ‘Ohana O Kalaupapa site of the former Baldwin Home for Men and Boys. The ‘Ohana gathering place for families, friends and students paying has secured a 65-year lease of the site from the Board of respects to the ancestors. Land and Natural Resources contingent on completion of an Environmental Assessment which is underway. This A draft design of the Memorial is currently being reviewed by past October, the State Land Use Commission unanimously the Kalaupapa residents and the ‘Ohana Board of Directors. approved the Memorial as a permitted use for the parcel. Once approved, we will proceed to complete Chapter 343, the state environmental compliance process. We thank Maui When the Design Team was discussing ideas at the site of County Mayor Alan Arakawa, The Maui County Council the Memorial in June, an ahu was built to mark the site of and the county’s Office of Economic Development for the the Memorial—and as a symbol of our commitment to see $100,000 grant that is making the design work possible. the Memorial become reality. The ahu has since become a

Preservation Awards For the second year in a row, The Historic Hawai‘i Foundation recognized the innovative work of Ka ‘Ohana O Kalaupapa at its annual awards dinner in Honolulu. Preservation Awards were presented to the ‘Ohana for our “Restoration of Family Ties” outreach program that has helped nearly 600 families learn about their ancestors and to our traveling Photo Exhibit, “A Reflection of Kalaupapa: Past, Present and Future.” The Photo Exhibit, which features nearly 100 framed pictures by acclaimed photographer Wayne Levin, is in its

second successful year at the Molokai Museum &amp; Cultural Center in Kalae. The exhibit will remain there at least through August 30, 2016 so be sure to stop by if you live on Molokai or visit the island.

A home for the ‘Ohana at Kalaupapa Ka ‘Ohana O Kalaupapa now has an address in Kalaupapa town: 155 McKinley Street. Dr. Linda Rosen issued an Executive Order during her tenure as Director of the State Department of Health that resulted in a house being assigned to the ‘Ohana which will enable us to conduct necessary business related to the Memorial and family outreach. As you can see by the photo, we’ve already hosted an important visitor! The Executive Order also made it possible for the ‘Ohana to help families visit Kalawao in the van that was donated to us last year. Mahalo, Dr. Rosen!

Taking the message of Kalaupapa to the schools

Ka ‘Ohana O Kalaupapa continued to make presentations to students and teachers who wanted to learn more about the history of Kalaupapa as told in the words of the people themselves. Thanks to ‘Ohana historian Anwei Law and translator Carol L. Silva, many letters, petitions and documents from the earlier years have been translated from Hawaiian, giving us a much more inclusive look at the history through the voices of those who had been sent to Kalaupapa. Our awardwinning historical exhibit, “A Source of Light, Constant and Never-Fading,” continues to travel around the schools.

The ‘Ohana connected with more than 700 students and teachers during 2015. We held our first teachers workshop at Kalaupapa and arranged for 30 members of the Kamehameha Schools Concert Glee Club to perform a concert in historic Paschoal Hall at Kalaupapa.

Aloha Week Parade The ‘Ohana had our first entry in the Aloha Week parade on Oahu with students marching through Waikiki alongside descendants. Our kupuna, Robert Ho‘opi‘i and Helemano Lee, proudly rode in the convertible. In keeping with this year’s theme of Aloha Week, “Hulu Aloha” (Beloved Feather Treasures), ‘Ohana marchers carried kahili made by students who were led by ‘Iolani School kumu hula Lehua Carvalho. Mahalo to our Oahu chapter of Kalaupapa descendants and friends for all their hard work and aloha! Students march with descendants of Kalaupapa in the annual Aloha Week parade in Honolulu. Photo: Ka ‘Ohana O Kalaupapa

The year ahead Next year will be a year of expanding and evolving the ‘Ohana in different ways. We are establishing chapters of the ‘Ohana across the islands so you can help spread the word in your community – and gather with other Kalaupapa descendants/friends on your own island. We will also mark a somber anniversary on January 6, 2016. This will be the 150th anniversary of when the first 12 people were taken from their families and sent to Kalaupapa in 1866. We remember their names: Kahauliko, Loe, Liilii, Puha, Lono, Kini, Waipio, Kainaina, Kaaumoana, Nahuina, Lakapu and Kipehe. They were the first of nearly 8,000. They are with us always. The ‘Ohana welcomes requests to conduct presentations for community organizations or schools. Email us at: info@kalaupapaohana.org. We hope we can count on your continued patronage to make next year as successful as this year has been. Your support keeps our programs growing. Mahalo in advance. Sending you all best wishes for a blessed Christmas and a healthy and happy 2016! Season’s aloha,

The ahu was built by the Kalaupapa Memorial Design Team to mark the piko (center) of the Memorial. Since then, families, friends and students have been leaving ho‘okupu (offerings) in honor of all those who died at Kalaupapa. Photo: Ka ‘Ohana O Kalaupapa