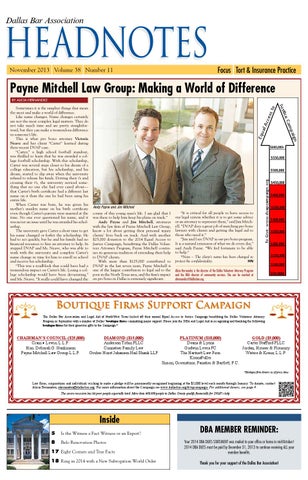 course of this young man’s life. I am glad that I was there to help him keep his plans on track.” Andy Payne and Jim Mitchell, attorneys with the law firm of Payne Mitchell Law Group, know a lot about getting their personal injury clients’ lives back on track. And with another $25,000 donation to the 2014 Equal Access to Justice Campaign, benefitting the Dallas Volunteer Attorney Program, Payne Mitchell continues its generous tradition of extending their help to DVAP clients. With more than $125,000 contributed to DVAP in the last seven years, Payne Mitchell is one of the largest contributors to legal aid to the poor in the North Texas area, and the firm’s impact on pro bono in Dallas is extremely significant.

“It is critical for all people to have access to our legal system whether it is to get some advice or an attorney to represent them,” said Jim Mitchell. “DVAP does a great job of matching pro bono lawyers with clients and getting the legal aid to those who need it.” “Jim and I see DVAP as our pro bono program. It is a natural extension of what we do every day,” said Andy Payne. “We feel fortunate to be able to help.” *Note – The client’s name has been changed to   HN protect his confidentiality.

Sometimes it is the simplest things that mean the most and make a world of difference. Like name changes. Name changes certainly are not the most complex legal matters. They do not take much time and are pretty straightforward, but they can make a tremendous difference in someone’s life. This is what pro bono attorney Victoria Neave and her client “Carter” learned during their recent DVAP case. “Carter,” a high school football standout, was thrilled to learn that he was awarded a college football scholarship. With this scholarship, Carter was several steps closer to his dream of a college education, but his scholarship, and his dream, started to slip away when the university refused to release his funds. Dotting their i’s and crossing their t’s, the university noticed something that no one else had ever cared about— that Carter’s birth certificate had a different last name on it than the one he had been using his entire life. When Carter was born, he was given his mother’s maiden name on his birth certificate even though Carter’s parents were married at the time. No one ever questioned his name, and it was never an issue until he was awarded his scholarship. The university gave Carter a short time to get his name changed or forfeit the scholarship. He had to act quickly, but he and his family had no financial resources to hire an attorney to help. In stepped DVAP and Ms. Neave, who was able to work with the university and complete Carter’s name change in time for him to enroll in school and receive his scholarship. “This was a roadblock that could have had a tremendous impact on Carter’s life. Losing a college scholarship would have been devastating,” said Ms. Neave. “It really could have changed the

Alicia Hernandez is the director of the Dallas Volunteer Attorney Program and the DBA director of community services. She can be reached at ahernandez@dallasbar.org.

Boutique Firms Support Campaign The Dallas Bar Association and Legal Aid of NorthWest Texas kicked off their annual Equal Access to Justice Campaign benefitting the Dallas Volunteer Attorney Program in September with a number of Dallas’ boutique firms committing major support. Please join the DBA and Legal Aid in recognizing and thanking the following boutique firms for their generous gifts to the Campaign*:

Law firms, corporations and individuals wishing to make a pledge will be prominently recognized beginning at the $5,000 level each month through January. To donate, contact Alicia Hernandez, ahernandez@dallasbar.org. For more information about the Campaign see www.dallasbar.org/dvapcampaign. For additional donors, see page 4. The severe recession has hit poor people especially hard. More than 600,000 people in Dallas County qualify financially for DVAP’s help.

Is the Witness a Fact Witness or an Expert?

DBA MEMBER REMINDER: Your 2014 DBA DUES STATEMENT was mailed to your office or home in mid-October! 2014 DBA DUES must be paid by December 31, 2013 to continue receiving ALL your member benefits. Thank you for your support of the Dallas Bar Association!