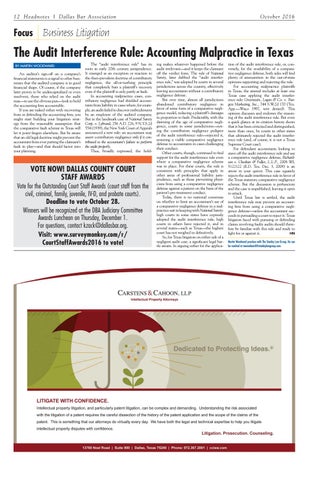 An auditor’s sign-off on a company’s financial statements is a signal to other businesses that the audited company is in good financial shape. Of course, if the company later proves to be undercapitalized or even insolvent, those who relied on the audit may—to use the obvious pun—look to hold the accounting firm accountable. If you are tasked either with recovering from or defending the accounting firm, you might start building your litigation strategy from the reasonable assumption that the comparative fault scheme in Texas will let it point fingers elsewhere. But be aware that an old legal doctrine might prevent the accountant from ever putting the claimant’s fault in play—and that should factor into your planning.

The “audit interference rule” has its roots in early 20th century jurisprudence. It emerged as an exception or reaction to the then-prevalent doctrine of contributory negligence, the all-or-nothing principle that completely bars a plaintiff’s recovery even if the plaintiff is only partly at fault. In accounting malpractice cases, contributory negligence had shielded accountants from liability in cases where, for example, an audit failed to discover embezzlement by an employee of the audited company. But in the landmark case of National Surety Corp. v. Lybrand, 256 A.D. 226, 9 N.Y.S.2d 554 (1939), the New York Court of Appeals announced a new rule: an accountant may assert contributory negligence only if it contributed to the accountant’s failure to perform the audit properly. Thus, broadly expressed, the hold-