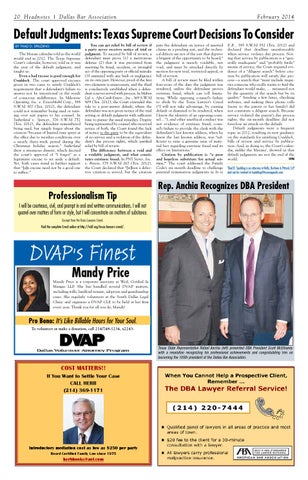 The Mayan calendar told us the world would end in 2012. The Texas Supreme Court’s calendar, however, told us it was the year of the default judgment, and taught us: Even a bad excuse is good enough for Craddock. The court approved excuses given in two cases to satisfy Craddock’s requirement that a defendant’s failure to answer not be intentional or the result of conscious indifference. In Milestone Operating, Inc. v. ExxonMobil Corp., 388 S.W.3d 307 (Tex. 2012), the defendant could not remember being sued or turning over suit papers to his counsel. In Sutherland v. Spencer, 376 S.W.3d 752 (Tex. 2012), the defendant remembered being sued, but simply forgot about the citation “because of limited time spent at the office due to weather conditions over a nearly three-week period during the Christmas holiday season.” Sutherland drew a strenuous dissent, which decried the court’s approval of “I forgot” as a legitimate excuse to set aside a default. Yet, both cases stand as further support that “[a]n excuse need not be a good one to suffice.”

You can get relief by bill of review if a party never receives notice of trial or judgment. To succeed by bill of review, a defendant must prove (1) a meritorious defense (2) that it was prevented from asserting by fraud, accident, or wrongful act of the opposing party or official mistake (3) unmixed with any fault or negligence on its own part. However, proof of the first two elements is unnecessary, and the third is conclusively established when a defendant is never served with process. In Mabon Ltd. v. Afri-Carib Enters., Inc., 369 S.W.3d 809 (Tex. 2012), the Court extended this rule to a post-answer default, where the defendant was not given notice of the trial setting or default judgment with sufficient time to pursue the usual remedies. Despite being represented by counsel who received notice of both, the Court found the lack of notice to the party to be the equivalent of no service and a violation of the defendant’s due process rights, which justified relief by bill of review. The difference between a void and a voidable judgment, and what constitutes extrinsic fraud. In PNS Stores, Inc. v. Rivera, 379 S.W.3d 267 (Tex. 2012), the Court declared that “[w]hen a defective citation is served, but the citation

puts the defendant on notice of asserted claims in a pending suit, and the technical defects are not of the sort that deprive a litigant of the opportunity to be heard,” the judgment is merely voidable, not void, and must be attacked directly by motion for new trial, restricted appeal, or bill of review. A bill of review must be filed within four-years of the date the judgment was rendered, unless the defendant proves extrinsic fraud, which can toll limitations. While opposing counsel’s failure to abide by the Texas Lawyer’s Creed (“I will not take advantage, by causing default or dismissal to be rendered, when I know the identity of an opposing counsel…”), and other unethical conduct was not evidence of extrinsic fraud, counsel’s failure to provide the clerk with the defendant’s last known address, when he knew the last known address, was “sufficient to raise a genuine issue of material fact regarding extrinsic fraud and its effect on limitations.” Citation by publication is “a poor and hopeless substitute for actual service.” The court addressed the Family Code’s six month deadline to challenge parental termination judgments in In re

E.R., 385 S.W.3d 552 (Tex. 2012) and declared that deadline unenforceable when service violates due process. Noting that service by publication is a “generally inadequate” and “probably futile” means of service, the Court required evidence of a “diligent search” before citation by publication will satisfy due process—a search that “must include inquiries someone who really wants to find the defendant would make, … measured not by the quantity of the search but by its quality.” Sending a few faxes, checking websites, and making three phone calls (none to the parent or her family) did not constitute a diligent search. Because service violated the parent’s due process rights, the six-month deadline did not foreclose an attack on the default. Default judgments were a frequent topic in 2012, resulting in new guidance on the standards for satisfying Craddock, bills of review and service by publication. And, in doing so, the Court’s calendar, unlike the Mayans’, showed us that default judgments are not the end of the   HN world. Thad D. Spalding is an attorney at Kelly, Durham &amp; Pittard, LLP and can be reached at tspalding@texasappeals.com.

I will be courteous, civil, and prompt in oral and written communications. I will not quarrel over matters of form or style, but I will concentrate on matters of substance. Excerpt from the Texas Lawyers Creed. Find the complete Creed online at http://txbf.org/texas-lawyers-creed/.

Mandy Price is a corporate associate at Weil, Gotshal &amp; Manges LLP. She has handled several DVAP matters, including wills, landlord-tenant, adoption and guardianship cases. She regularly volunteers at the South Dallas Legal Clinic and organizes a DVAP CLE to be held at her firm every year. Thank you for all you do, Mandy!