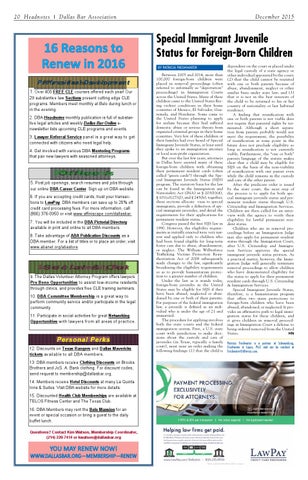 5. Post job openings, search resumes and jobs through our online DBA Career Center. Sign up on DBA website. 6. If you are accepting credit cards, trust your transactions to LawPay. DBA members can save up to 25% off credit card processing fees. For more information, call (866) 376-0950 or visit www.affiniscape.com/dallasbar. 7. You will be included in the DBA Pictorial Directory available in print and online to all DBA members. 8. Take advantage of ABA Publication Discounts as a DBA member. For a list of titles or to place an order, visit www.abanet.org/abastore.

Pro Bono Opportunities to assist low-income residents through clinics, and provides free CLE training seminars. 10. DBA Committee Membership is a great way to perform community service and/or participate in the legal community. 11. Participate in social activities for great Networking Opportunities with lawyers from all areas of practice.

Between 2005 and 2014, more than 100,000 foreign-born children were placed in removal proceedings (often referred to informally as “deportation” proceedings) in Immigration Courts across the United States. Many of these children came to the United States fleeing violent conditions in their home countries of Mexico, El Salvador, Guatemala, and Honduras. Some came to the United States planning to apply for asylum because they had suffered domestic abuse or serious threats from organized criminal groups in their home countries. Very few of these children or their families had ever heard of Special Immigrant Juvenile Status, at least until they spoke to an immigration attorney or local non-profit organization. But over the last few years, attorneys in Dallas have assisted many of these foreign-born children with obtaining their permanent resident cards (often called “green cards”) through the Special Immigrant Juvenile Status (SIJS) program. The statutory basis for the law can be found in the Immigration and Nationality Act (INA) at § 203(b)(4), § 101(a)(27)(J), and § 245(h); together, these sections allocate visas to special immigrants, provide a definition of special immigrant juveniles, and detail the requirements for their applications for permanent resident status. Congress passed the first SIJS law in 1990. However, the eligibility requirements as initially enacted were very narrow and applied only to children who had been found eligible for long-term foster care due to abuse, abandonment, or neglect. The William Wilberforce Trafficking Victims Protection Reauthorization Act of 2008 subsequently made changes to the law, significantly broadening the eligibility requirements so as to provide humanitarian protection to a greater number of children. Under the law as it stands today, foreign-born juveniles in the United States may be eligible for SIJS if they have been abused, neglected or abandoned by one or both of their parents. For purposes of the federal immigration law, a juvenile is defined as an individual who is under the age of 21 and unmarried. The procedure for applying involves both the state courts and the federal immigration system. First, a U.S. state court with jurisdiction to make decisions about the custody and care of juveniles (in Texas, typically a family court), must issue an order making the following findings: (1) that the child is

dependent on the court or placed under the legal custody of a state agency or other individual appointed by the court; (2) that the child cannot be reunited with one or both parents because of abuse, abandonment, neglect or other similar basis under state law; and (3) that it is not in the best interests of the child to be returned to his or her country of nationality or last habitual residence. A finding that reunification with one or both parents is not viable does not require that parental rights be terminated. Although a short separation from parents probably would not meet the requirement, the possibility of reunification at some point in the future does not preclude eligibility so long as reunification is not currently viable. Furthermore, the “one or both” parents language of the statute makes clear that a child may be eligible for SIJS on the basis of the non-viability of reunification with one parent even while the child remains in the custody and care of the other parent. After the predicate order is issued by the state court, the next step of the process is to apply for both special immigrant juvenile status and permanent resident status through U.S. Citizenship and Immigration Services. Children are then called for an interview with the agency to verify their eligibility for lawful permanent resident status. Children who are in removal proceedings before an Immigration Judge may also apply for permanent resident status through the Immigration Court, after U.S. Citizenship and Immigration Services approves the special immigrant juvenile status petition. As a practical matter, however, the Immigration Judge will generally terminate removal proceedings to allow children who have demonstrated eligibility for the status to apply for their permanent resident cards through U.S. Citizenship &amp; Immigration Services. Special Immigrant Juvenile Status, therefore, is a humanitarian program that offers two main protections to foreign-born children who have been abused, abandoned, or neglected. It provides an affirmative path to legal immigration status for these children, and it gives children in removal proceedings in Immigration Court a defense to being ordered removed from the United   HN States. Patricia Freshwater is a partner at Schwamkrug, Freshwater &amp; Lopez, PLLC and can be reached at freshwater@dfwvisa.com.