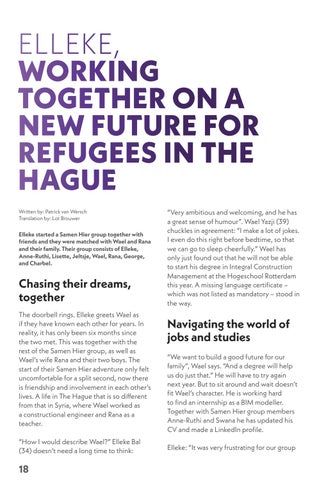 ELLEKE, WORKING TOGETHER ON A NEW FUTURE FOR REFUGEES IN THE HAGUE Written by: Patrick van Wersch Translation by: Lot Brouwer

Elleke started a Samen Hier group together with friends and they were matched with Wael and Rana and their family. Their group consists of Elleke, Anne-Ruthi, Lisette, Jeltsje, Wael, Rana, George, and Charbel.

Chasing their dreams, together The doorbell rings. Elleke greets Wael as if they have known each other for years. In reality, it has only been six months since the two met. This was together with the rest of the Samen Hier group, as well as Wael’s wife Rana and their two boys. The start of their Samen Hier adventure only felt uncomfortable for a split second, now there is friendship and involvement in each other’s lives. A life in The Hague that is so different from that in Syria, where Wael worked as a constructional engineer and Rana as a teacher. “How I would describe Wael?” Elleke Bal (34) doesn’t need a long time to think:

“Very ambitious and welcoming, and he has a great sense of humour”. Wael Yazji (39) chuckles in agreement: “I make a lot of jokes. I even do this right before bedtime, so that we can go to sleep cheerfully.” Wael has only just found out that he will not be able to start his degree in Integral Construction Management at the Hogeschool Rotterdam this year. A missing language certificate – which was not listed as mandatory – stood in the way.

Navigating the world of jobs and studies “We want to build a good future for our family”, Wael says. “And a degree will help us do just that.” He will have to try again next year. But to sit around and wait doesn’t fit Wael’s character. He is working hard to find an internship as a BIM modeller. Together with Samen Hier group members Anne-Ruthi and Swana he has updated his CV and made a LinkedIn profile. Elleke: “It was very frustrating for our group 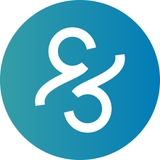