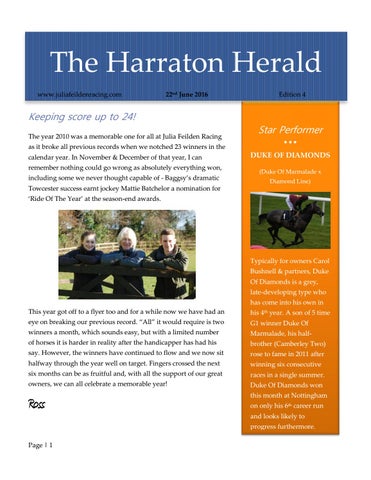 Keeping score up to 24! The year 2010 was a memorable one for all at Julia Feilden Racing as it broke all previous records when we notched 23 winners in the calendar year. In November &amp; December of that year, I can remember nothing could go wrong as absolutely everything won, including some we never thought capable of - Baggsy’s dramatic

Towcester success earnt jockey Mattie Batchelor a nomination for ‘Ride Of The Year’ at the season-end awards.

Typically for owners Carol Bushnell &amp; partners, Duke Of Diamonds is a grey, late-developing type who has come into his own in This year got off to a flyer too and for a while now we have had an

eye on breaking our previous record. “All” it would require is two

winners a month, which sounds easy, but with a limited number

say. However, the winners have continued to flow and we now sit

halfway through the year well on target. Fingers crossed the next

six months can be as fruitful and, with all the support of our great

races in a single summer.

owners, we can all celebrate a memorable year!

this month at Nottingham on only his 6th career run and looks likely to progress furthermore.

THUMBS UP Julia and I have been converted to buying from the Breeze-Up Sales this year and have already yielded rewards from this source with £10,000 purchase Spirit Of Sarwan scoring at the second time of asking this month. Our success has come from buying horses with a very limited budget but there are significant rewards to spending a lot more money, as shown at Royal Ascot this month. Both of the 5f two-year old races for the boys (Windsor Castle &amp; Norfolk Stakes) were won by graduates from this year’s Breeze-Ups with Ardad costing £170,000 and Norfolk winner Prince Of Lir costing the same. Proving the belief that ‘Breeze-Up horses don’t train on’ wrong was Group 1 Prince Of Wales’ Stakes winner and £40,000 purchase My Dream Boat. If professionalism, value for money and a quicker return on your investment is what you want, look no further than a Breeze-Up horse.

THUMBS DOWN Besides the usual suspects of the weather and the incompetency of the BHA, for once there isn’t too much for me to moan about. However, the mud-slingers must be satisfied so I’ll have a pop at football hooligans. At this month’s Euro Championships, the English fans have never been far from trouble with fights breaking out here, there and everywhere. Although other nations have been to blame too, the English should realise they are representing the rest of us, have one less can of Stella Artois and just sit down to enjoy the sport. After all, it’s only 22 millionaires chasing a bag of air around a field!

Controversy surrounds the ‘Duel At The Dog Track’ Earlier this month, bookmakers William Hill organized a one-off event to promote both the Epsom Derby and the Greyhound Derby. At Towcester racecourse, a horse and a greyhound were set to go head to head over three furlongs to determine who was the fastest. Representing horses across the world was our very own Limerick Lord, a winner over a mile at Southwell last December, against a greyhound who is one of the best in the country. All seemed to go well in the preliminaries with both horse and hound handling the media attention well. As they waited in their respective starting stalls, our jockey Adam was determined to get a good start. Much to his surprise, he could see the dog had started already whilst he was still stationary. Expecting a countdown to begin, a few moments later came a message over the walkie-talkie: “The dog’s gone”. Panic stations were hit and the stalls handler eventually let Limerick go but it was always an uphill task from there on – literally and metaphorically as Towcester has one of the steepest uphill finishes in the country. Add to this the heavy ground conditions, Adam and his ride were always up against it. Despite a game chase, Limerick came home eight ‘dog lengths’ behind the winner, who set a new course record, with cries of foul play coming from the stands (Julia was the only person in the stands). Controversy aside, it was a fun morning’s entertainment and all came home safe and sound. If you would like to see a video recap of the race, please CLICK HERE.

CALLING ALL GOLFERS! Last year’s inaugural owners’ golf day proved to be a great day with golfers of all abilities taking to the fairway to bash some balls and put the world to rights under clear blue skies. This year’s 18-hole golf day is scheduled for Thursday 18th August so email me on rbirkett1989@hotmail.co.uk to join. It is open to everyone &amp; should be another top afternoon.

SALES CORNER With just a few shares left available in him, this is your last chance to get involved in an extremely exciting twoyear old we bought from the Tattersalls Guineas Breeze-Up Sale by leading first-season sire REQUINTO.

After catching our eyes when galloping before auction, we have been nothing but impressed with this handsome bay as he continues to go about his homework in impressive style. He looks to possess plenty of ability and is ready to hit the track now the seven furlong juvenile races have started. Requinto is a new addition to the powerful Coolmore Stud’s stallion ranks and his first crop of runners have got off to a flying start with six winners on the board already, including the highly impressive York winner Broken Stones (who was also bought at the Breeze-Up sales) Born in early March 2014, this bay is already very well developed and looks certain to do well in his first year racing, yet has enough size to suggest he will improve again next year. He put up an impressive breeze at the sales, travelling strongly before changing his legs in the dip and accelerating up the hill. You can see for yourself here: http://www.tattersalls.com/av/bup22016/96.mp4 10% shares are available in him at a cost of £1550 each plus £200 per month all-inclusive training fees. Email juliafeilden@aol.com for more details. Jockey Shelley Birkett came down to ride him recently and said:

“He’s lovely, he moves beautifully and has a great attitude. He goes as well as any of the winning two-year olds I have ridden at my boss David O’Meara’s.”

My Name Is Jeff &amp; Maureen Case share a kiss at the yard (photo: Kevin Case) Send your best snaps to rbirkett1989@hotmail.co.uk to feature here!

Carol Bushnell &amp; Jonathan Kinge are all smiles after Duke

Q&amp;A – DICK CREESE Owners don’t come as loyal as Richard ‘Dick’ Creese who has been with Julia since day one of her training career and for the past 16 years has always had at least one horse in the yard. His white and orange colours have become a familiar sight on British racecourses and his interests have now extended to the breeding side of things with his successful filly, Bushy Dell, currently in foal.

What sparked your interest in racing? I was just 14 years old when my mum was seriously ill and, when not at work, dad spent all of his time at her bedside. One day she insisted he went out for the evening – “and take your son with you”. We went to Alexandra Park races, loved it and became regular racegoers after mum died.

How did you get involved in owning racehorses? When dad died he left me a small amount of cash. I decided I would use it to do something he would have loved. In the national press I spotted an advert for Peter Harris racehorse partnerships. He would have loved to have owned a horse. I purchased a 12th share in a horse called Taste Of Success – we didn’t taste any but I loved being an owner and met people who have become long-term friends.

How did you get involved with Julia Feilden Racing? I joined the National Stud owners/breeders club and they organized a full day’s tour of Newmarket. It started with an early visit to the Heath followed by breakfast at the Bedford Lodge Hotel. I was having breakfast when a lady sat next to me - we talked and I ended up with a share in a horse called Jenko! I think her training licence came through shortly afterwards!

What was your most memorable day as an owner with Julia? Most of them! But to pick two: 1) Misty Man’s win at Wolverhampton – he was the first horse I owned outright and the first to carry my colours. 2) Jenko’s first run over hurdles at Huntingdon. He fell at the third hurdle and ran off the course! Despite horseboxes, 4x4s and even police cars, he could not be found. They almost called a helicopter! Fortunately, a lady noticed a horse under a tree in the field behind her house – it had a saddle on but no rider. He had gone four miles – and the trainer had said he might not stay two!

What sets Julia’s yard apart from others? It’s friendliness – boss, staff and owners. Julia must be the only trainer to put up with an owner with no email or text!

What is the link between most of your horses’ names? (Little Orchid, Bushy Dell, Kingsmead etc) I am very lucky to own a house with an uninterrupted view across the Lea Valley. Immediately behind the house is the Kingsmead Nature Reserve which includes the Chadwell Spring, the Little Meadow and the Bushy Dell. Bushy Dell used to have a claim to fame as the site where quite rare miniature orchids grew – until the council built a great big viaduct through it!

Which is your favourite and least favourite racecourse? I should say Wolverhampton – I have won seven races there! For ‘owners’ experience’ you can’t beat Newbury and Ascot. My least favourties: Chepstow – it’s a long way and always rains. Redcar – instructions to the car park sums it all; “turn left through the cemetery”. A run-down housing estate and a closed steelworks don’t improve the view and the wind off the North Sea is really cold!

What could be done to improve the ownership experience? Send all racecourse management to Newbury to see how they treat owners.

Which race would you love to win the most? The next one! Also my homebred foal (left) Delboy’s first race.

Any words of wisdom for other owners? Expect to lose – it makes winning all the better! Look at the annual statistics that Weatherbys produce – especially the one which shows the number of horses that have won during the year. It’s very small and those winning prize money is quite small. Ownership is for fun – not for profit.

field, why didn’t the jockey just let it go?” – Reg Kempen via email

Jockey Adam Beschizza says: “Firstly, jockeys have to do what their trainers tell them to otherwise they’ll never ride for them again! Also, particularly over longer distances, you need to conserve the horse’s energy for the finish – a horse can only run at its top speed for a maximum of three furlongs before it begins to tire. British races tend to be run at an even pace, quickening towards the finish so it is vital to have something left in the tank at the end. However, when I rode in America, there it is all about early speed so you are encouraged to go fast from the start and it just a case of clinging on at the end but that is mainly because they race on a dirt surface which favours front-runners.”

THE YEAR SO FAR