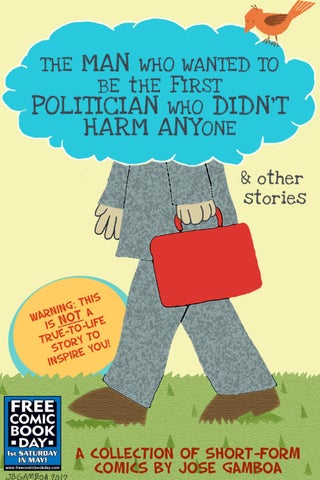 The Man Who Wanted to Be the First Politician Who Didnâ&amp;#x20AC;&amp;#x2122;t Harm Anyone was created back in 2003. It was written and illustrated in less than twenty four hours as part of a storybook creation challenge me and my sister thought up one day.

The following silent comic, titled Manila 2023, is a comic I drew back when I was at university. It revolves around the themes of poverty, political corruption, the role of media, and family. Set in Manila for the most part, I wanted to add sci fi elements and to imitate the narrative of films where unrelated events are interconnected. Originally in black and white, I later added color in order to make the â&amp;#x20AC;&amp;#x2DC;jumpsâ&amp;#x20AC;&amp;#x2122; clearer.

A submission for Fully Bookedâ&amp;#x20AC;&amp;#x2122;s 1st Philippine Graphic Fiction Awards. Set in the an alternate reality, Invasion takes place in the Philippines before the Spanish occupation. Manila, Sandata, and Bolo, a trio of warriors from a small island in Mindanao, travel into the future to avert disaster from befalling their world. The comic is unfinished because the submission guidelines only allowed a maximum of twelve pages. Unfortunately, it didnâ&amp;#x20AC;&amp;#x2122;t make the cut.

I was asked to create a series of strips that promoted green living through recycling common household items such as CDs, tarpaulins, ice cream tubs and plastic bags. The result was The Secret Lives of Trash. In the style of talking head documentaries, household items narrate their lives. The strips were featured in the June issue of Juice.ph.

About the Author Jose Gamboa is a writer, visual artist, and teacher. Sometimes he tries to be realistic. He is the author and illustrator of several books, graphic novels and childrenâ&amp;#x20AC;&amp;#x2122;s storybooks, including Pacquiao: Winning In &amp; Out of the Ring and Laban! A Love Story. To order a print version of this book. go to Lulu.com/shop/jose-gamboa/the-manwho-wanted-to-be-the-first-politicianwho-didnt-harm-anyone/paperback/product-20097648.html jb@comicbiographies.com josegamboa.tumblr.com twitter.com/pinoyartista facebook.com/thepacquiaocomic

A collection of short form comics distributed on Free Comic Book Day, 2012. To purchase a print copy of this book: http://www.lulu.com/shop/jose-gamboa/the-man-who-wanted-to-be-the-first-politician-who-didnt-harm-anyone/paperback/product-20097648.html To order the Pacquiao Comic on iTunes: http://itunes.apple.com/us/book/pacquiao/id473206109?mt=11 https://itunes.apple.com/es/book/pacquiao/id820778912 (Spain) Laban! http://www.lulu.com/shop/jose-gamboa/laban-a-love-story/paperback/product-20018887.html) For opportunities/collaborations/inquiries, email me at pinoyartista(at)gmail.com. twitter: @pinoyartista 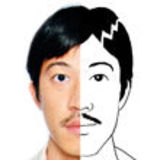