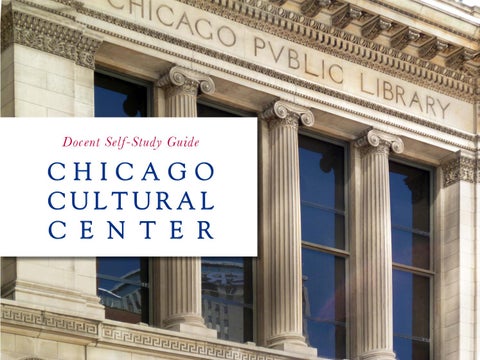 INTRODUCTION City of Chicago Department of Cultural Affairs &amp; Special Events: Today, when you walk into the Chicago Cultural Center, you enter a world of culture that is uniquely Chicago. It is the magical tour, whether you go through the gleaming Carrara marble and Tiffany glass Washington Street side or the more boisterously crowded, yet tranquil Randolph Street side. Somewhere in the marvelous building, at any hour of the day and into the night, people of all definitions, from near and far, are enjoying the multitude of exciting free events sponsored by the Chicago Department of Cultural Affairs. This is a People’s Palace — a celebration of the arts, education, Chicago, and the world. Constructed over 100 years ago as the Chicago Public Library and a Civil War memorial, the Chicago Cultural Center reflects the best of Chicago.

The Chicago Cultural Center, opened in 1897, is a Chicago Landmark building that houses the city’s official reception venue where the Mayor of Chicago has welcomed Presidents and royalty, diplomats and community leaders. It is located in the Loop, across Michigan Avenue from Millennium Park. Originally the central library building, it was converted to an arts and culture center at the instigation of Commissioner of Cultural Affairs Lois Weisberg. The city’s central library is now housed across the Loop in the spacious, post-modernist Harold Washington Library Center opened in 1991. As the nation’s first free municipal cultural center, the Chicago Cultural Center is one of the city’s most popular attractions and is considered one of the most comprehensive arts showcases in the United States. Each year, the Chicago Cultural Center features more than 1,000 programs and exhibitions covering a wide range of the performing, visual and literary arts.

HISTORY Chicago’s First Public Library The Chicago Cultural Center was built to house the city’s main library. The library was founded in 1872, following the fire of 1871, with a donation by the British of more than 12,000 volumes, The structure was completed in 1897.

The building stands on land formerly known as Dearborn Park, part of the military reservation of the Army’s Fort Dearborn. Because a Civil War veterans’ organization contended for the same parcel, a compromise was reached in 1891: It permitted the erection of a public library containing a memorial hall dedicated to the Grand Army of the Republic (the name of the organization for veterans of the Northern army during the Civil War). The library board stipulated that the new building should “convey . . . the idea that it is an enduring monument worthy of a great and public-spirited city.” The resulting structure, an imposing combination of Renaissance, neo-Greek, and Roman forms, became famous for its magnificent use of marble and interior mosaic decoration. The cost of construction was approximately $2 million. Foundation: The 72,000-ton building rests on 2,357 oak-log piles driven to hardpan at a depth of 74 feet. Although log piles had often been employed before, this was the first use of deep-driven piles. The method was developed by structural engineer Sooy Smith and continued in the city until concrete caissons were introduced years later. Structure of Walls: Exterior walls are of solid masonry construction without a steel skeleton and are 3´ thick. Materials used on the exterior are Bedford limestone with a granite base. The floors are supported by steel beams with hollow tile arches (thus fireproof).

From the Outside, the Building Appears to have Three Stories. The Inside is Five Stories

General Design Treatment: The lower part of the structure, with its wide arched windows, is characteristic of Roman design. The upper part is more purely Greek in style. The pillars and columns are separated by windows. The entablature is of pronounced Roman character, with heavy garlands and lion heads sculpted on the frieze. From the outside, the building appears to have 3 stories: The first is a low granite base, or podium, with rectangular windows; the second is defined by massive piers set between large windows under semicircular arches; the upper level, more ornate, leans toward Roman or neo-Greek design. Actually the inside has five stories—three principal stories, two intermediate floors, one basement. Floors intersect the large windows at different points, although this is not readily visible from the exterior.

INTERIOR The walls and stairs are of pure Carrara marble of the grade used by sculptors since Michelangelo from Tuscany region in Italy. Medallions of a rare, darkgreen marble from Connemara, Ireland, are set into the balustrades. The domes of stained glass are said to be two of the largest in the United States. Inscriptions, decorative patterns, and printers’ symbols forty one accent the mosaic walls. The type of mosaic design used here is called cosmati work—a craft originating in Italy during the Middle Ages, whereby glass, stone, and other colorful and reflective materials are inlaid in white Cosmati: Latin marble and set on angled surfaces with slight irregularities so as to increase their brilliance in the light. Cosmati work is meaning “made by hand” also characterized by geometric patterns reflecting Arab influence. The mosaics were designed by Robert C. Spencer and executed by J. A. Holzer, formerly of the Tiffany Studios, who had also completed the mosaics in the Marquette Building at about the same time. (Note that some sources refer to the mosaics having been done by Tiffany Glass and Decorating Company of New York, but designed by Charles Coolidge, the design architect of the building and the overall decoration.) The scheme of decoration was adopted for practical reasons; it was thought that murals would soon have been hidden or rubbed off owing to soot-laden air from the Illinois Central Railroad.

By the 1960s, talk of a new library building became serious. Private developers offered land to the city in exchange for the library’s Michigan Avenue address, but a binding 1839 U.S. War Department document was discovered, stating that the site could be used only for public purposes. Renovation of the existing building was considered. By the 1970s, plans called for renovating the existing edifice and building a new library. The first renovation was by Holabird &amp; Root in 1972. The firm again renovated and modernized the building into a library and cultural center in a four-year project ending in 1977. The project cost about $12 million. Twenty percent of the space was dedicated to cultural activities. In 1980, Mayor Jane Byrne abandoned plans to build a new library next to the Cultural Center. Later, Mayor Harold Washington favored a new structure on a different site. A 1988 competition produced the design for the current central library located on South State Street.

Preston Bradley Hall &amp; Tiffany Dome (Washington side) The magnificent dome is approximately 38 feet (11.58 meters) in diameter with approximately 30,000 pieces of glass in 243 sections. The glass is graded to have more intense color as you look upward to the center oculus. The dome (and the lighting fixtures, wall sconces and chandeliers) was made by Tiffany Glass and Decorating Company of New York and is said to be the largest in the world. The supporting frame was constructed by the Chicago Ornamental Iron Company. The pattern on the dome is that of fish scales, a Roman motif that fits with the classical architectural elements. At the base of the dome is a quotation from the British author Joseph Addison. At the top of the dome are the signs of the zodiac. Originally there was a glass structure over the dome, allowing it to be illuminated by sunlight. In 1935 this glass covering was replaced (probably because of leaks) with pre-cast concrete roof slabs covered with roof felt and a sheet of copper. In 2005, restoration of the dome was begun with work on the oculus (center) of the dome having been completed in 2006. Late in 2007 restoration of the remainder of the dome began and was completed on July 1, 2008. The fish scale panels of glass which had been inverted (!) during prior work (1930’s) were removed, restored, and reinstalled back with the proper side now able to be viewed, allowing people to appreciate the red “nuggets” of cast-glass. About 2% of the glass pieces had to be replaced with new glass, manufactured by Kokomo Glass Co. of Indiana, which had manufactured the original. The same “recipes” were used for this 42 replacement glass. The concrete outside cover was replaced by a translucent exterior dome of three layers of insulated/laminated glass 1¼ inch thick with a white PVB interlayer to reduce UV light. This allows natural light to again illuminate the Tiffany dome, although artificial light was also installed to allow the dome to be lit on cloudy days and at night. The cast-iron frame was cleaned and restored to its original finish, aluminum leaf coated with an amber-tinted glaze, which creates an aged patina similar to old gold leaf, but more lustrous and iridescent. Total cost of the restoration was $2.2 million.

Favrile was a major breakthrough for Tiffany, used in all his windows, lamps, vases and mosaics. Tiffany Glass &amp; Decorating Company was issued a trademark for Favrile Glass in 1894.

“Books are the legacies that a great genius leaves to mankind which are delivered down from generation to generation as presents to the posterity of those who are yet unborn.” Joseph Addison

Grand Army of the Republic Rotunda and Memorial Hall (Randolph side): Healy &amp; Millet executed the overall interior decoration of the Rotunda and Hall. In the G.A.R. Rotunda, the 40-foot stained-glass dome, which uses jewel-cut glass and botanical motifs, is held in place by cast-iron ribbing, manufactured by the Winslow Brothers of Chicago. The dome utilizes Italian renaissance patterns. Again, restoration of the dome was begun in 2005, with work on the oculus completed in 2006, allowing natural light back in again. A small portion of the frame has also been cleaned. This dome is in worse shape than the Tiffany Dome in Preston Bradley Hall was, necessitating more repairs and replacements to the glass. Further restoration is tentatively scheduled for 2009. In the floor of the Rotunda are glass blocks that are now up-light. Originally, these provided natural light from the dome to the first floor below.

CONCLUSION Since 2006, the Cultural Center has had a green roof with more than 950 shrubs and 12,000 plants. There are also 18 solar panels to heat the building’s water and 4 beehives producing honey, which may be purchased in the Cultural Center’s shop. R. M. Chin and Associates provided design and project management services to reinforce the roof in order to support the additional weight of a green roof.

Other designated a Chicago Landmark November 15, 1976 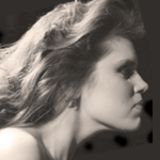