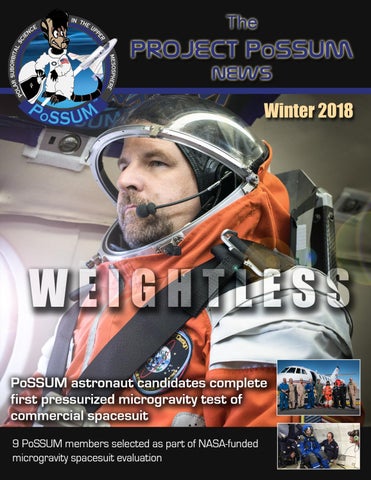 A team of 12 Project PoSSUM graduates participated in the first pressurized test of a commercial spacesuit in microgravity, led by PoSSUM in partnership with the National Research Council (NRC) of Canada located in Ottawa, Ontario. The tests were conducted from October 2–5, 2017. As part of the PoSSUM Bioastronautics Program, PoSSUM graduates evaluated a prototype commercial spacesuit designed by Final Frontier Design (FFD) of Brooklyn, NY., following two successful unpressurized spacesuit campaigns that were completed in October 2015 and November 2016. These initial unpressurized spacesuit tests evaluated the wearer’s range of motion, fine motor skills and seat egress and ingress. The PoSSUM team also evaluated a special spacecraft seat that was designed and constructed by the PoSSUM team and integrated to an in-flight suit pressurization system, communications system, a biometric

monitoring system and a simulated cockpit where test subjects ‘fly’ the simulated PoSSUM suborbital profile that they learned at their PoSSUM training at Embry-Riddle’s Daytona Beach Campus. The Dassault Falcon 20 aircraft operated by the NRC was chosen for these tests because of its exceptional quality of microgravity that best approximates the space environment, as well as a cabin interior that best replicates several space vehicles being produced. “The NRC has truly become part of our PoSSUM team. The three microgravity flights went off without incident, and we gathered the first visor-down microgravity data for Final Frontier Design’, said Hammerstein, “We also made large strides in testing efficiency during this campaign. The technical and professional improvements our team has made in microgravity testing over the years are clear, and really showed their colors in these tests.”

The next step for the PoSSUM team will be to undergo egress and sea survival testing next April, a critical step before they may be approved for suborbital and highaltitude applications. If all goes well, the PoSSUM team hopes to conduct the first high-altitude flight later in 2018 using the suits to push past the Armstrong limit, an altitude (above 60,000 ft.) beyond which

humans absolutely cannot survive in an unpressurized environment. â&#x20AC;&#x153;The purpose of these tests is to increase our technology readiness level (TRL) through human testing in a high fidelity, relevant environment. The results will be used to validate pressurized suit performance under live, unpredictable conditions and further our milestone goal of obtaining flight safety approval from the FAA,â&#x20AC;? says Ted Southern, President of FFD.

One PMC-Turbo Camera System Awaits Launch in Antarctica while the full payload is integrated at NASA’s Columbia Scientific Balloon Facility One of the eight specialized camera systems designed and constructed partly by Project PoSSUM members for the NASAfunded ‘PMC Turbo’ mission is currently in Antarctica awaiting a window in the weather that would allow it to be launched to an altitude of 38km above the continent, piggybacked upon the gondola supporting the Super TIGER mission. Super TIGER (‘Super Trans-Iron Galactic Element Recorder’) is a payload developed at the Washington University in Saint Louis that will measure cosmic ray elements from massive stars in our galaxy that exploded and sent particles zipping through Earth's atmosphere. When a launch window opens, the PMC-Turbo camera will launch with the Super TIGER experiment for a two-week mission around the Antarctic polar vortex, where the camera will image fine structures of noctilucent clouds from altitudes approaching 40km. The single camera will not only serve as a technology demonstrator for the entire PMCTurbo camera suite that will launch in July from Kiruna, Sweden but also obtain high-resolution imagery of noctilucent cloud activity over the southern hemisphere from which northern hemisphere data could be compared. While the single camera is in Antarctica, the remaining seven camera systems are being integrated and tested at the Columbia Scientific Balloon Facility. Located in Palestine, TX, this facility provides services of launching large, unmanned, high-altitude research balloons as well as providing the tracking and recovery of balloon payloads. Here, the seven PMC-Turbo camera systems, along with an airborne lidar system from the German Space Agency (DLR) will be prepared for launch next July in Kiruna,

Sweden. The balloon-borne lidar system will be the first time that a lidar has ever been deployed on a high-altitude balloon. The camera system currently in Antarctica will serve as a ground spare in Kiruna. The data obtained from PMC-Turbo will enable a deeper understanding of small-scale dynamics and turbulence in the mesosphere; PoSSUM candidates will later use commercial suborbital vehicles to construct 3D tomography of these small-scale features.

Inaugural PoSSUM Applied Astronautics Class Studies Space Environment, Space Physiology, and Celestial Navigation This February, twelve PoSSUM graduates enrolled in the inaugural PoSSUM Applied Astronautics Program Class of 2018 will be the first students to participate in three unique PoSSUM academic courses. Dr. Armin Kleinboehl, a NASA atmospheric scientist currently working on Martian atmospheric models, will be instructing a course on Suborbital Space Environment, which will cover the general properties and characteristics of the geospace environment and the underlying physical mechanisms. As part of the course, the students will study the fundamentals of aeronomy with special emphasis is given to the to environmental hazards most relevant to the operations of crewed spacecraft, including particles and radiation, impact phenomena, spacecraft charging, aerodynamic drag, and oxygen corrosion of surfaces.

Also offered in the Spring will be the first PoSSUM course on celestial mechanics, taught by Jim Cook. Jim is an expert navigator and will provide the PoSSUM students with practical instruction in celestial navigation and how it pertains to suborbital and orbital imaging and remote sensing missions. The students will get the skills necessary to navigate by use of a sextant and sight reduction tables, very relevant skills when designing mission profiles where knowledge of solar position is essential to optimizing imagery techniques.

Finally, Dr. Erik Seedhouse will introduce the class to an in-depth coverage of spaceflight physiology, including the unique aspects of health maintenance of individuals exposed to the rigors of spaceflight, including an overview of the physiological changes and adaptations that occur during each phase of spaceflight and describes the counter measures in current use. Dr. Seedhouse is an aerospace/life sciences scientist and Assistant Professor in the Applied Aviation Sciences Department at Embry-Riddle Aeronautical University, where he teaches life support systems in the Space Studies Program. All three courses are ten-weeks in duration and are open to the general public. Interested individuals may apply online at http://projectpossum.org/scienceprograms/graduate-programs/

PoSSUM partner Final Frontier Design recently completed its System Definition Review (SDR) for integration of a space suit into an F-104 Starfighter aircraft, operated by Starfighters of the FFD space suit in the F-104, along with Aerospace. The review marks the first physical fitting The review took place at Starfighterâ&#x20AC;&#x2122;s offices at a baseline definition of all systems required for flight. the Kennedy Space Center (KSC) in Florida, in November 2017.

The Final Frontier Design suit used for the review was built in 2017 and included customized and unique interfaces designed to utilize vehicle life support equipment, including breathing oxygen, ventilation gas, parachute interfaces, and communications. The review included suit integration with the F-104 ejection seat, along with pilot assessment of vehicle control under pressurized conditions.

The Lockheed F-104 is listed as the best “No Gravity Platform” according to NASA D-3380 documents, with up to 90 seconds of microgravity, speeds up to Mach 2.2, and altitudes above 85,000 ft. SFA currently owns and operates eight F-104s from the KSC Shuttle Landing Facility.

SFA’s Director of Flight Operations, Captain Piercarlo Ciacchi, said “ FFD’s space suit feels ready to fly! Lots of progress have been done in these last 2 years of teamwork, we are looking forward to using it in our missions.” FFD’s President, Ted Southern, noted “After years of work we have established a viable architecture and concept of operations to help take the F-104 back to high altitudes. Our partners at Starfighters Aerospace recognize the basic operational need for pressure suits for high altitude flight, and we are proud to be working with them. It is an awesome vehicle.”

PoSSUM partner Integrated Spaceflight Services is offering two partial grants of $800 each for the April 2018 Advanced PoSSUM Academy. The grants will be awarded on the basis of merit and need. The Advanced PoSSUM Academy program is designed to teach aspiring scientist astronauts how to 1) perform effective suborbital noctilucent cloud tomography missions, and 2) to conduct PoSSUM aeronomy, bioastronautics, and human factors research that provide a research foundation for tomorrow’s space missions. Interested individuals should apply online at projectpossum.org.