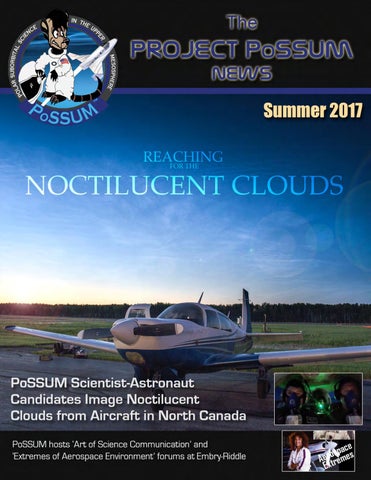 Last July, a team of 17 Project PoSSUM team scientists and scientistastronaut candidates spent two weeks in the remote town of High Level in northern Alberta, Canada as part of a flight research team that was deployed to study noctilucent clouds from a research aircraft and two ground stations, each specially equipped with scientific camera systems. These rare clouds form in polar regions at altitudes of 50 miles and are believed to be sensitive indicators of man-made climate change and good proxies of low-density atmospheres such as that of Mars. The cameras will later be used for a high-altitude balloon campaign over Antarctica in December to study these clouds and later to fly through them in manned suborbital spacecraft, such as Virgin Galactic’s Spaceship Two.

On each night, PoSSUM teams deployed to two ground stations: the ‘High Level’ station in the town of High Level, and the ‘Wood Buffalo’ station, located 200km to the east by the Wood Buffalo National Park. From 24

June to 8 July, a total of six sorties were flown along carefully-constructed flight plans to altitudes of 21,000ft; the rare clouds were observed on four of these flights and the data obtained was coordinated with data observed by PoSSUM teams at two remote ground stations. By carefully coordinating the flights with two ground stations, the team hopes to build tomography or three-dimensional images of the fine internal structures of the clouds from which turbulence and instabilities in the upper atmosphere may be better understood. Much of what the PoSSUM astronautcandidates have learned during their initial PoSSUM training was applied to this first field campaign. Flying at 23,000 feet in an unpressurized research aircraft is a challenging proposition and mission team members must be keenly aware of the effects of hypoxia. Flights will also require precise navigation, effective communications and crew resource management techniques, as well as an intimate knowledge of the cameras and their control systems.

PoSSUM scientist-astronaut training to this research campaign, as each flight required precise navigation, effective communications and crew resource management techniques, and an intimate knowledge of the cameras and their control systems. Every minute of flight along the pre-determined flight path came at the expense of many hours of preparations, and each flight sortie learned from the lessons of the previous: camera exposure and sequencing techniques were optimized, means to eliminate jitter was progressively mitigated, and teams better characterized the effects of the windows and filters the cameras were looking through.

There was a strong analogy between the aircraft research teams and the simulated suborbital missions the students practiced while at Embry-Riddle. “The air crew and both ground teams were observing the same region of sky; we wanted to demonstrate tomographic techniques to view cloud structures in 3D and also determine how altitude can improve our ability to study noctilucent clouds.” explained PoSSUM command pilot Dr. Jason Reimuller, “Further, the imagers deployed were designed for the NASA-funded ‘PMC-Turbo’ balloon mission designed to study these clouds, and the PoSSUM observations helped validate these instruments on actual noctilucent cloud structures.”

“The first night we arrived presented a good flight opportunity, and teams had little time to rest before their midnight departure.” Reimuller said, “Flying along the 58th parallel, the remoteness of northern Alberta created a darkness that made it difficult to fly with any visual reference, but as fortune had it, we were greeted by an intense display of noctilucent clouds that intermingled with aurora. For many of the PoSSUM graduates, it was the first time they had the opportunity to experience these clouds in person.”

Coordinating closely with each ground station, the teams devised a method where all camera stations could target the same region of interest in real-time. The PoSSUM students directly applied the skills they obtained during their

Obtained at an altitude over 50% of the Earth’s atmosphere, the aircraft observations demonstrated sharper images and a significant increase in contrasts between clouds and sky,

“Flying at these altitudes in the remote Canadian wilderness at night requires careful mission planning and the crew must be well trained to function effectively in such an environment,” explained PoSSUM Executive Director and command pilot Dr. Jason Reimuller. “For many of the team members, this is as close to an actual space mission as you can get.”

A series of videos was produced during the campaign and may be viewed on the PoSSUM website: http://projectpossum.org/research/airborne-nlc-tomography/

of extreme aerospace environments, and the necessity of human components and artistic expression to communicate science.” commented PoSSUM Executive Director Dr. Jason Reimuller. “These are all essential elements of the PoSSUM mission.”

The new PoSSUM graduates will become involved with existing research programs to study the upper-atmosphere, evaluate IVA and EVA spacesuits, and participate in educational outreach and technology development programs in preparation for airborne and suborbital research missions. This summer, PoSSUM graduates will image noctilucent clouds from research aircraft in Northern Alberta with cameras designed for a highaltitude balloon campaign over Antarctica later this year. This October the PoSSUM team will conduct the first visor-down, zero-G parabolic flight tests in Ottawa, Ontario as well as test the ability of the suit to perform a variety of postlanding contingency operations as part of the PoSSUM Bioastronautics Program.

Captain Scott was a former NASA astronaut and served as a mission specialist on STS-72 in 1996 and STS-87 in 1997, and has logged a total of 24 days, 14 hours and 34 minutes in space, including 3 spacewalks totaling 19 hours and 26 minutes. Capt. Scott shared his experience in EVA spacesuits and how that experience might influence the design and safe operation of commercial EVA spacesuits, such as those that will soon be tested by Project PoSSUM members.

Patty Wagstaff is a six-time member of the US Aerobatic Team and has won the gold, silver and bronze medals in Olympic-level international aerobatic competition. She is the first woman to win the title of US National Aerobatic champion and one of the few people to win it three times. Patty talked about her experiences in the physical conditioning needed for extreme physiological stresses of aerobatic competition.

“Airshow competition has taught me a lot about physical adaptation and about being able to concentrate in high-g loads.”, said Wagstaff, “This is experience I hope might be relevant to those preparing to do Project PoSSUM space research in high-G.”

An astronaut, artist, and scientists held a public PoSSUM forum at Embry-Riddle to discuss how art enables science communication

“PoSSUM is making novel measurements of noctilucent clouds from aircraft, high-altitude balloon, and soon suborbital spacecraft,” said Reimuller. “We are observing the most sensitive part of our planet in ways never seen before, and these observations enable new ways for both scientific analysis and artistic interpretation. Scientific analysis helps us better address fundamental

questions of our atmosphere; artistic interpretation allows these insights to be communicated in many ways to many different communities”.

The forum was part of a PoSSUM course titled “SciArts and Science Communication”, a collaborative effort between Project PoSSUM and the SciArt Exchange that is instructed by Dr. Jancy McPhee and teaches students how to best express science through art. The initial class saw Project PoSSUM students Patricia Meder, Chris Lundeen, Pritpal Singh, and Harvey Waters find a common expression of art designed to communicate an element of PoSSUM research.

“Really wonderful things happen through the integration of art and science,” said Stott, who is also a member of the Board of Trustees at EmbryRiddle. “I look forward to this PoSSUM program discussion on The Art of Science Communication as we explore this SciArt topic.”

These graduates will join PoSSUM’s existing corps of researchers interested in space mission design and contingency operations. From 7-10 April 2018, a PoSSUM team will conduct the first phase of evaluations of the Final Frontier IVA spacesuit in nominal and offnominal post-landing environments. The PoSSUM graduates will test the functionality of parachute release, Life Preserver Unit (LPU) usage, and snorkel functionality in varying sea and lighting conditions. The graduates will also learn the effective use of radios, beacons, signal flares, and other signaling devices in water and egress bottle use for egress operations. This training is required for PoSSUM Candidates interested in high-altitude research flights scheduled for Summer 2018.

PMC-Turbo Camera System integrated to Super-TIGER for Antarctic Balloon Mission this December PoSSUM partner researchers at Columbia University traveled to Palestine, TX from 24-28 July to integrate one of the eight specialized camera systems designed and constructed partly by Project PoSSUM members for the NASA-funded ‘PMC Turbo’ mission onto the gondola supporting the SuperTiger mission. Super TIGER (‘Super Trans-Iron Galactic Element Recorder’) is a structure jammed with electronics that will be hitched to a huge, atmospheric balloon and launched in December over Antarctica. It will rise to 120-130 thousand feet and stay there for 30-45 days measuring cosmic ray elements from massive stars in our galaxy that exploded and sent particles zipping through Earth's atmosphere. The mission will host the PMCTurbo camera and launch this December for a two-week mission around the Antarctic polar vortex, where the camera will image fine structures of noctilucent clouds from altitudes approaching 40km. The test will not only obtain

novel imagery of the clouds fine structures but also validate the imagery technology for the full PMC-Turbo mission, which will fly seven of these specialized, environmentally controlled camera systems together with a lidar system provided by the German space agency for a two-week circumpolar mission dedicated to investigating the micro-features of noctilucent cloud structures.

PoSSUM Introduces the Applied Astronautics Program This summer, Project PoSSUM introduced the PoSSUM Applied Astronautics Program, the only program of its type in the world. The 21-credit immersive professional education program currently under the accreditation process, focuses on aeronomy reserach, bioastronautics research, space mission design, spaceflight operations, and science education. The Applied Astronautics Program is open to all PoSSUM Scientist-Astronaut Candidates and Advanced PoSSUM Academy graduates and students have the option of selecting two research tracks from four topics, including aeronomy, bioastronautics, science education, and extravehicular activity. A final advanced research elective will involve the student in a thesis research project. A list of classes comprising the program follow:

Applications for PoSSUM Scientist-Astronaut Class 1702 and Advanced PoSSUM Academy are now being accepted Please note the deadline is 15 August 2017 for these two courses to be held at EmbryRiddle. Interested individuals should apply online at projectpossum.org.