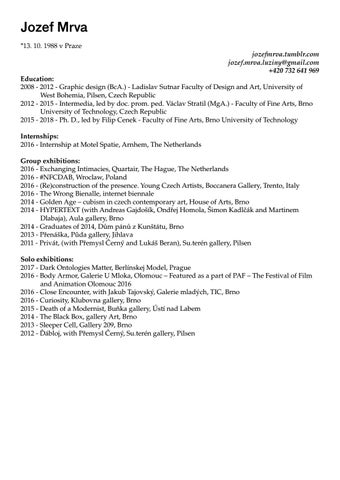 Knot Capital series â&#x20AC;&#x201C; 2016 - ongoing My most recent body of work revolves around exploration of geometric and semiotic possibilities of knotted torus. Through the medium of 3D modelling and graphic design I create scenarios, models and textual works that examine cosmological topology and play with alternative cosmogonic scenarios. Some results of these works were shown in BerlĂ­nskej Model.

Reject the Globe And Oppose Flat Earth at the Same Time, still from a video loop (9 minutes), 2017 https://youtu.be/BI4AH6a2u6Q

Dark Ontologies Matter – Berlínskej Model, Praha, 2017 In Berlínskej Model, I was exploring hypothetical topogical alternatives to Earth as a gloge. If the Flat Earth conspiracy theory renders our Earth as flat, can we imagine it as a four-dimensional hypersphere or as a knotted torus?

Body Armor – Galerie U Mloka, Olomouc, 2016 This exhibition was featured as a part of PAF - Festival of Film and Animation Olomouc 2016 “The author in his series of cardboard masks consciously binds together cruelty of wild animal behaviour with sophisticated form of precise layering and folding of paper. The mask usage during various rituals has always been a part of human culture since its beginnings and some of its appeal still remains up to this day. Jozef Mrva’s objects effect the viewer with nonchalant urgency - it is possible that the we still feel the need to abandon our own visual uniqueness and get rid of the burden of individualism?” - Viktorie Schotterová

Close encounter – Galerie mladých, Brno - 2016 The Close Encounter project is a result of a long dialogues between Jakub Tajovský and me. We took a horror classic The Color Out Of Space by H. P. Lovecraft as a starting point towards imagining a clash between two disparate realities. We constructed a model of hollowed asteroid impacting a grid and accompanied it with a selections of short texts and drawings.

Curiosity – Galerie Klubovna - 2016 “In his project, Jozef Mrva is interested in gathering large amounts of data about Curiosity rover landing in Gale Crater on Mars and in the transcription, reconstruction and reshaping of that data. The result is a subjective transcription of available data in the medium of paint and object that allow the impossible and distant to happen and become a familiar reality, a landscape we can relate to. It is no longer about reproducing what can be seen, the artist is concerned about reproducing the mediated information. Thanks to this “interactive plein-air”, we don’t sense the martian landscape as virtual, mediated anymore. On the contrary, we can now experience it first hand.” – Lenore Jurkyová

Facebook interventions â&#x20AC;&#x201C; 2013-2016 I irregularly indulge in Facebook interventions. The intervetions are performative, they consist of routine repetition of a process, which results in timeline cover picture or profile picture. The images are created by constant re-screencapturing of the previous images and their uploading into the Facebook interface. The images get more deformed and faded with every next step and create an illusion of a third dimension in the realm of a Facebook webpage. It is an imprint of time in a single image. The Event Performance was featured as a part of The Wrong internet biennale 2015.

Social Network as a Landscape, 2016

Death of a Modernist – Buňka Gallery, Ústí nad Labem - 2015 My installation in offspace gallery Kostka in Aussig consisted of two pieces: One was a print, a diagram featuring names of Avant-garde movements on one side, and metal prefixes on the second The viewer was invited to create his own combinations of Metal and classical Avant-garde meta-genres. The object was a cardboard-made shape depicting risen fist, with fingers glued and supported by wooden sticks, evocating an sense of instability and collapse. The whole exhibition was based on nostalgia and interpretation of the great modernist period and utopian dreams which failed to happen and became genres which post-modernism was ironically playing with. The name comes from a song by american hardcore band Orchid. 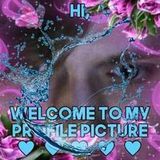