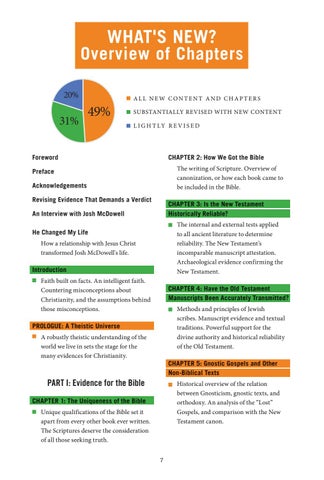 CHAPTER 2: How We Got the Bible The writing of Scripture. Overview of canonization, or how each book came to be included in the Bible.

An Interview with Josh McDowell

He Changed My Life How a relationship with Jesus Christ transformed Josh McDowell&#39;s life.

Introduction Faith built on facts. An intelligent faith. Countering misconceptions about Christianity, and the assumptions behind those misconceptions.

CHAPTER 4: Have the Old Testament Manuscripts Been Accurately Transmitted? Methods and principles of Jewish scribes. Manuscript evidence and textual traditions. Powerful support for the divine authority and historical reliability of the Old Testament.

PROLOGUE: A Theistic Universe A robustly theistic understanding of the world we live in sets the stage for the many evidences for Christianity.

PART I: Evidence for the Bible

Historical overview of the relation between Gnosticism, gnostic texts, and orthodoxy. An analysis of the “Lost” Gospels, and comparison with the New Testament canon.

CHAPTER 1: The Uniqueness of the Bible Unique qualifications of the Bible set it apart from every other book ever written. The Scriptures deserve the consideration of all those seeking truth. 7

Evidence That Demands a Verdict

CHAPTER 11: Is Christianity a Copycat Religion?

CHAPTER 6: The Historical Existence of Jesus

Documented historical sources (Christian and non-Christian) confirming that Jesus was indeed a man of history. Archaeological support for Jesus’ existence.

CHAPTER 12: The Deity of Jesus: An Investigation

CHAPTER 7: The Lofty Claims of Jesus

A consideration of the hypothesis that Jesus was actually God. The uniqueness of his entrance into history, life, teachings, death, and resurrection provide resounding confirmation.

An analysis of Jesus’ claims to deity, both direct and indirect.

CHAPTER 13: The Martyrdom of the Apostles

If the New Testament records about Jesus are historically accurate, there remain only three logical choices concerning his identity.

How the willingness of the apostles to suffer and die for their faith provides compelling evidence for the sincerity of their testimony.

Overview of Christ’s comprehensive fulfillment of Old Testament prophecy. Illustrations of the sheer improbability that all the messianic prophecies of the Old Testament could be fulfilled in one man, in response to the critic who says, “It is all just a coincidence.”

CHAPTER 10: The Resurrection: Hoax or History?

Heavily documented evidence for the historicity of Christ’s literal, bodily resurrection. The significance of the resurrection for the Christian faith. Analysis and refutation of counter-theories.

An overview of a range of faithful approaches to the Genesis origins account.

CHAPTER 16: Archaeology and the Old Testament

CHAPTER 22: The Historicity of the Divided Monarchy and Exilic Period

How the ever-shifting field of biblical archaeology continues to provide support for the reliability of Scripture. An exploration of the promise and limitations of archaeology for Christian apologetics.

Overview of the well-documented historicity of the Divided Monarchy and exilic period. Answers to objections, including Finkelstein’s “low chronology” and a minimalist approach to Scripture’s accounts.

CHAPTER 23: The Composition of the Pentateuch

The theological significance of Adam and Eve as historical figures. Analysis of the textual, scientific, and linguistic evidence for Adam and Eve’s historicity.

The purpose and importance of the first five biblical books. Addressing authorship questions, the Documentary Hypothesis, other interpretive challenges.

CHAPTER 18: The Historicity of the Patriarchs

CHAPTER 24: The Composition of the Book of Isaiah

Support from cultural and archaeological evidence of the ancient world for the historical reliability of the Genesis patriachal accounts.

A summary of critical approaches to Isaiah’s authorship and composition. The case for the unity of Isaiah.

CHAPTER 19: The Historicity of the Exodus

CHAPTER 25: The Historicity of Daniel

Analysis of the biblical account of the exodus from Egypt, including Moses’ life, linguistic evidence for Israel’s presence in ancient Egypt, and archaeological insights.

Despite modern denials of Daniel’s antiquity and historicity, Daniel is rooted firmly within the historical milieu of the exilic period.

CHAPTER 20: The Historicity of the Conquest Various interpretations of the Israelites&#39; entrance into Canaan. An overview of compelling cultural and archaeological evidence supporting the biblical account.

CHAPTER 21: The Historicity of the United Monarchy The cumulative case for a period of Israelite national unity under David and Solomon.

Evidence That Demands a Verdict

CHAPTER 31: Are Miracles Possible? The nature, characteristics, and purpose of miracles. A comprehensive critique of various objections against the possibility of miracles.

CHAPTER 27: The Nature of Truth Why truth matters for everyday life. Understanding truth as correspondence with reality. Countering non-viable theories of truth.

CHAPTER 32: Is History Knowable? Christianity is a fundamentally historical faith, grounded in real people and events. Though historical knowledge presents unique challenges, we have good reason to conclude that history is knowable.

CHAPTER 28: The Knowability of Truth Even if thereâ&amp;#x20AC;&amp;#x2122;s such a thing as truth, can we really know it? A solid case for the fundamental knowability of truth, and rebuttals of various objections.

APPENDIX: Responding to the Challenges of

Carefully reasoned responses to one of todayâ&amp;#x20AC;&amp;#x2122;s most influential philosophical challenges to Christian thinking.

Skepticism calls all knowledge into question, often masquerading as humility regarding our epistemological limitations. A brief historical overview of various forms of philosophical skepticism. Biblical discernment and a sincere desire to know truth as the appropriate response to our intellectual limitations.

How to Know God Personally 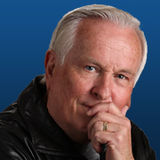